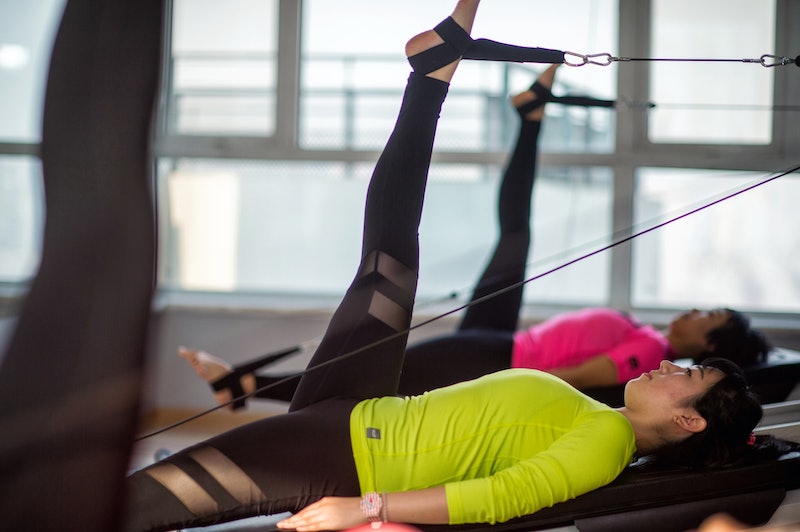 As the daughter of doctors, I learned very early on that germs are everywhere — some good, some bad, all inescapable. It was a fact of existence. But thanks to this recent study, which took a look at the gym, the amount of bacteria on gym equipment will make sure you never forget to wipe down the elliptical (or treadmill, or stair stepper, or whatever your machine of choice is) again. Also, if anyone ever asks if I'm working out again, this is my permanent excuse not to.

Fit Rated, an exercise equipment company, recently commissioned a study from environmental testing group EMLab P&K on the grossness of gym equipment (I mean, for a company trying to sell you a home workout system, it's not a bad idea). 27 pieces of equipment at three different gyms were swabbed, and the information compiled to determine the amount and the variants of bacteria on three common pieces of equipment: Treadmill, exercise bike, and free weights. Let's start with the basics — comparing the cleanliness of exercise equipment to other publicly used items — and then we'll move onto what you should actually be worried about (and what you shouldn't). Ready?

And free weights had 362 times more bacteria than a public toilet.

But. (You knew there was a "but" coming, right?) Before you swear off weights forever and commit yourself to a life of narrow shoulders and weak wrists, let's talk about the different kinds of bacteria found during the study, because heads up: Bacteria are incredibly important to the survival of humans. Longing to live a sanitized, scrubbed down, "bacteria-free" existence is how we got into the current era of drug-resistant superbugs, my dudes. We come into contact with bacteria all the time, and it's not always a bad thing.

Now, gram-negative rods are the ones you really do want to look out for. 90 to 95 percent of them are harmful to humans, and unfortunately, they accounted for almost a third of the bacteria found on gym equipment. Gram-positive cocci are not quite as spooky, but they are a leading cause of skin infections and pneumonia; they accounted for around 40 percent of the swabbed bacteria.

Yeah, it's a bummer. Wash your hands after working out, shower, wipe down equipment before and after you use it — and hey, you're still here, you're still fine, practice good hygiene, and, uh, maybe take up, like, yoga if you've been put off free weights for life. (But remember to keep your mat clean.)