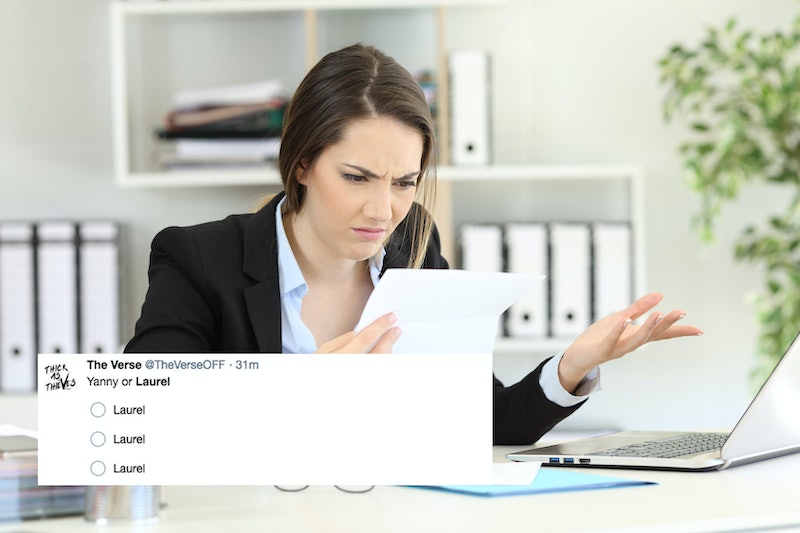 Antonioguillem/Fotolia
By Alli Hoff Kosik
May 17, 2018

The debate about whether a viral four-second audio clip is a recording of the word "laurel" or "yanny" has divided families, workplaces, and relationships over the past few days. Tensions are running high. Those that hear "laurel" can't understand how anyone could possibly hear "yanny" — and vice versa. And while it's nice to believe that there might be more than one correct answer to a question like this (everybody wins!), we can't all be right. At last, the creator of the clip has spoken and revealed the answer to the yanny or laurel debate — so, there can be no further doubt. Here's the truth behind the clip.

The voice behind this national controversy is 18-year-old high schooler Roland Szabo, according to ABC News. The Georgia native explained on Reddit that he recorded the pronunciation for the word "laurel" directly from Vocabulary.com via his computer speakers. The use of these speakers might explain some degree of poor sound quality and, therefore, ambiguity about what was actually being said, but the fact remains — the final word on the matter (literally) is "laurel." If you were holding firm on "yanny," you should probably go ahead and make good on the bet you made with your friends or admit defeat to your mom, because the case is officially closed.

Assuming you were #TeamYanny, you may have lost the battle, but you'll be glad to know that there's an actual reason that you heard what you did. Dr. Bharath Chandrasekaran — associate professor of communication sciences and disorders at the University of Texas at Austin — broke it down for ABC News' Brad Mielke on the "Start Here" podcast:

We do a lot with what little auditory information goes into our brain, so we're constantly making predictions. In this case, there's a lot of ambiguity in the cues, partly because it's a noisy clip with no context and no visual cues to help you out. Without context, conversational speech can sound really, really weird.

The quality of Szabo's computer speakers, along with the quality of the speakers on the many devices through which the clip has been subsequently played since it went viral, probably have a lot to do with the confusion. And since the words "laurel" and "yanny" (which is really a sound and not a word) aren't exactly used commonly in day-to-day conversation, the lack of context that Dr. Chandrasekaran cited on "Start Here" makes even more sense.

The "laurel" versus "yanny" debate has been prime fodder for talk shows and late night hosts, but it's also (naturally) taken the social media world by storm — and the Twitterverse is as shook by the conclusion to the debate as they were by the debate itself...

... well, maybe not quite as shook as they were in the heat of the argument:

The debate did make for some pretty hilarious content, though, and as great as it is to have the whole thing settled, I think I might actually miss some of it. It's moments like this when I can't help but find Twitter especially LOL-worthy.

The matter of "laurel" and "yanny" has been a unique distraction from much more pressing matters, and now that the creator of the clip has spoken out and put our questions to rest, I'm sure we'll get back to business, along with more important political issues and current events. Still, I think it's probably only a matter of time before we're all embroiled in another controversy of perception. First it was the blue or gold dress, and now this audio clip. What will it be next?