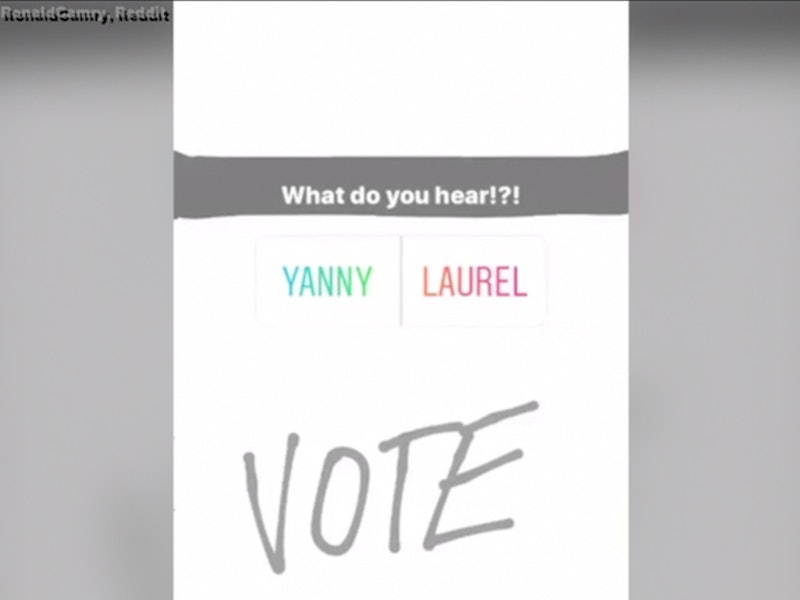 Remember that day, back in February 2015, when the world became completely obsessed with The Dress? If you were on the internet that fateful day, then you already know what I'm talking about: the photo of the dress that divided the nation. People believed it was either white and gold or black and blue, and the arguments that went on about it were endless (by the way, it was 100 percent white and gold. No arguments!). It started out as entertaining, but quickly got exhausting, which is why I'm personally glad that debate is over. Well, it looks like something similar has just begun: there's a video circulating on Twitter that has users divided on if a robot voice is saying "yanny" or "laurel."

The video is only a few seconds long, but it has already attracted tons of media attention, and it's not hard to see why. It features a robotic voice saying one word over and over again, playing over an image of what looks like an Instagram Story poll. The question is, "what do you hear!?!" with two poll options: "Yanny," or "Laurel." Once you hear it, you're going to feel completely confused about how anyone else could possibly hear anything else. Check it out:

Now to me, personally, I can only hear the word "Laurel" being repeated over and over again. I have no idea, absolutely no idea at all, how anyone could hear anything but "Laurel." And yet, many people do hear "Yanny." This is The Dress all over again, except this is much worse, because it comes with sound.

Some people are reporting that they hear different words when they listen through speakers versus headphones, and vice versa.

Although the video is currently making waves on Twitter, it originated on Reddit, as most viral things on the internet do. The video was posted a few days ago by a user named RolandCamry, and the original Reddit thread contains some theories as to why we are hearing such different sounds. One user pointed out an interesting theory about bass frequencies that I suppose makes sense:

Another user believes it depends on both your hearing range, as well as your speakers' performance. I don't quite get this, but sure:

A few users are saying they can hear both words, which is wild to me! This voice is very clearly saying "Laurel." I can't hear anything else!

One user posted a link to a YouTube video that apparently cuts off some of the spectrum so that you can hear both words. If I listen to it a few times, I can almost start to hear "Yanny" at the end. But, to be honest with you, I'm not sure if I'm forcing myself to hear "Yanny?" Like, I really want to hear "Yanny," so maybe I'm making myself believe I'm hearing it? I don't know anymore! I've only known about this for a few hours, and I'm already tired of hearing this voice that is going to soon haunt my nightmares!

Twitter users are just as divided as Reddit users, which has resulted in some pretty fierce debates going on. Some users are convinced those who hear "Yanny" instead of "Laurel" are simply lying (I am not convinced this is not true):

Some insist you just need to adjust the bass levels (this did nothing for me):

Others are not averse to making jokes at this sensitive time:

You know what? I'm already tired and this just started. Listen to the clip yourself, show it to literally everyone you know, then maybe invest in some earplugs, because this doesn't seem like it's going to end anytime soon.

More like this
Behind The Hilarity Of The "POV: You Walk Into My Room" TikTok Trend
By Lexi Inks
Why TikTok Is Flooded With Controversial Videos About "Pick Me Girls"
By Courtney Young
This TikTok Song About An Unrequited Romance Has FYPs In Shambles
By Emma Carey
How To Turn Off Night Mode On Your iPhone Camera
By Emma Carey
Get Even More From Bustle — Sign Up For The Newsletter