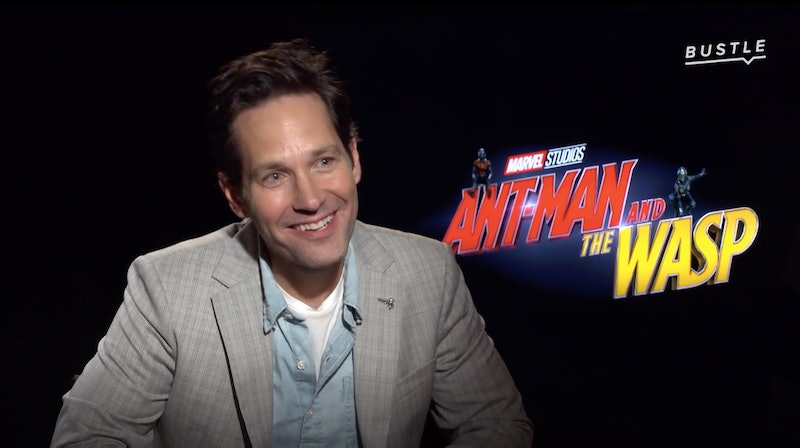 Marvel superheroes face everything from death-obsessed robots to hailstorms of bullets to Infinity Stone-wielding aliens on an almost daily basis. But it turns out that the most terrifying thing in the Marvel Cinematic Universe is... Marvel itself. The comic book giant is notoriously strict about keeping all secrets and potential spoilers under lock and key, and for good reason. But despite some MCU members who just can't seem to keep the secrets to themselves (*cough* Mark Ruffalo and Tom Holland, we're lookin' at you), Marvel stars have a pretty good track record when it comes to keeping major plot details under wraps. So it shouldn't come as a surprise to hear that the Ant-Man and the Wasp stars are afraid of spoiling Avengers 4, the next major superhero mashup. But the lengths to which they'll go to avoid risking having all of Marvel security come after them is pretty shocking.

When Bustle sat down with the cast of Ant-Man and the Wasp (out July 6) to play a Marvel-themed round of "Would You Rather ... ", stars Paul Rudd, Evangeline Lilly, Michael Douglas, Hannah John-Kamen and director Peyton Reed all revealed that they'd rather walk on broken glass — barefoot! — than accidentally reveal what happens in Avengers 4. So if there was any question at all about how strict Marvel is when it comes to keeping all the movie secrets unspoiled, this is the ultimate proof that its stars are willing to go to some pretty extreme measures to avoid accidentally revealing plot points before the studio is ready to share them.

But that wasn't all the Ant-Man stars revealed during our game of "Would You Rather." From picking between having the ability to fly versus super strength, Chris Evans' arms versus Chris Hemsworth's abs, and dealing with a home infestation of wasps versus ants, Rudd, Lilly, Douglas, John-Kamen and Reed were all put in the hot seat, no passing allowed. We even made them choose between being best friends with Luis (Michael Peña) and Baby Groot (Vin Diesel), so you know things got tough. Watch the video below now to see how creative the Ant-Man stars got with their answers.

The Ant-Man and the Wasp cast have a lot to be excited about these days. As the first MCU film to be released in the wake of Infinity War's game-changing events (and many shocking deaths), the movie has a lot to live up to. But as Reed told Bustle on the Atlanta-based set during production last summer, the highly-anticipated Ant-Man sequel actually has closer tie-ins with Captain America: Civil War than the latest Avengers film.

You see, in the MCU timeline, Ant-Man and the Wasp actually comes right before Infinity War, and the movie's events will mostly deal with the fallout from Scott Lang (Rudd) choosing to use the Pym Particle technology and Ant-Man suit to fight publicly alongside Captain America (Chris Evans) in Civil War. Scott has been on house arrest for the past two years to make good with the government in the post-Sokovia Accords world, and as such the sequel sees him on fairly rocky ground with Hope (Lilly) and Hank (Douglas).

"What I’m really happy about is we’re free to tell our freestanding story," Reed explained on the Ant-Man and the Wasp set. "Once we establish that as the leaping off point, this thing is going on over here with huge personal stakes that are really separate of what’s going on with Infinity War. That is something that was really, really appealing to me. We have enough stuff to track in this movie without having to keep abreast of what’s going on in that."

Of course, with all that being said, the timeline is fuzzy enough that Ant-Man and the Wasp could catch up to Infinity War at some point during the film. If the San Francisco-set movie begins right before Infinity War, there is the possibility that they could intersect. But we'll have to wait to see if that happens when the Ant-Man sequel officially hits theaters this weekend.