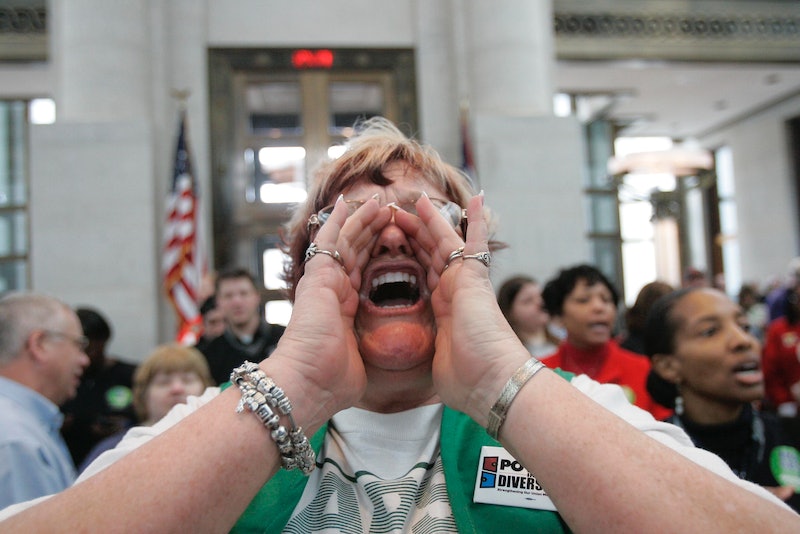 Pro-choice activists in Ohio need to get ready for another big fight. The newest proposed anti-choice legislation in Ohio would be a huge blow both for women's health and reproductive freedom, and the anti-choice groups in Ohio have indicated that they're really just getting started.

This is coming from the Ohio Right to Life anti-abortion group, the same charming people who brought you the 20-week abortion ban that John Kasich signed into law in December. Now, they've decided that a very common second term procedure, dilation and evacuation, actually amounts to "dismemberment" and should be banned.

"When thousands of human children are being torn limb from limb every year, it is incumbent on the State of Ohio to stand up and put a stop to this inhumane practice," said Ohio Right to Life President Mike Gonidakis. They've of course chosen to use the most politically-charged, alarmist language possible, even though the procedure is the safest and most common way to get a second-term abortion. Their explicitly-stated goal is to outlaw abortion, and this is just one step — but it could be an effective one. They already succeeded with the aforementioned 20-week ban, and this could essentially amount to a 13-week ban.

Their fight against women's reproductive freedom isn't going to stop there, either. Along with this legislation, they've revealed the rest of their goals for 2017, and you're not going to like them if you're an Ohioan who enjoys having control over her own body. These goals include acts to ban some abortion-reducing drugs, require the burial or cremation for fetal remains, and increase funding for pro-life pregnancy care centers, among others. This is all part of their long-term strategy to overturn Roe v. Wade and ban abortions altogether, and with such a strong anti-choice majority in the Ohio state legislature, there's a good chance that they can keep getting these bills passed.

Kellie Copeland, the executive director of NARAL Pro-Choice Ohio, points out that this latest restriction has nothing to do with a concern for women's health. "The goal of Ohio Right to Life is clear — to invoke shame and stigma against women who access abortion, and to punish the medical professionals that care for them," she said. She expressed optimism that the pro-choice side would have a leg to stand on in the fight against this legislation, but it's an uphill battle given the makeup of the legislature and Gov. Kasich's history of signing anti-choice bills into law.

The Trump administration is giving liberals and progressives a lot to be worried about it, but this is just a reminder that it's important not to lose sight of issues like these. Each victory for a group like this is a step toward abortion being outlawed entirely, especially if Trump manages to get another conservative justice or two onto the Supreme Court. Fight everything else too, but don't forget to watch out for bans like these as well.