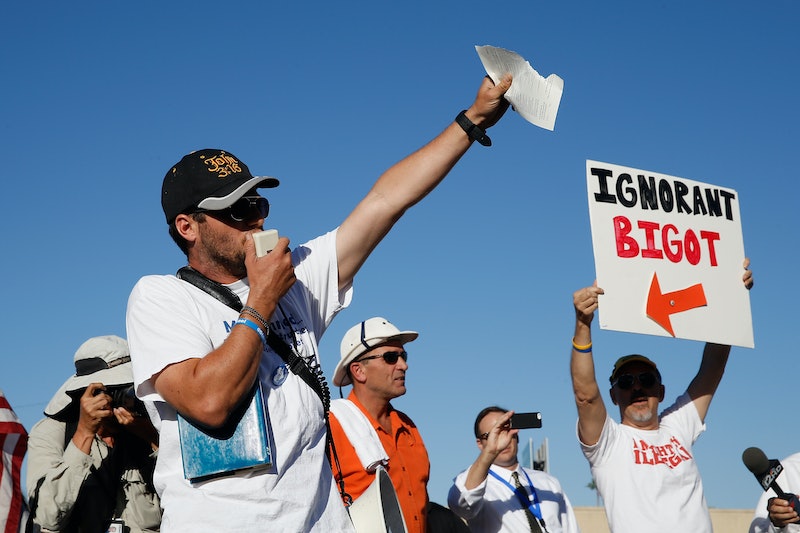 If you thought that bigots would have exhausted all possible forms of hypocrisy already, you're in for a nasty surprise. The Islamophobic hate group ACT for America held several "March Against Sharia" protests on Saturday across the country, in what they claim was a demonstration to protect America against Islamic law, or Sharia, taking over the country.

ACT For America, labeled an extremist group by the Southern Poverty Law Center, was founded in 2007 by a Lebanese immigrant woman named Brigette Gabriel. The movement has steadily gained thousands of members, all of whom are drawn to its virulent anti-Muslim ideology. For its entire decade of existence, ACT for America has worked to drum up fear that Sharia law is somehow infiltrating America, and that Muslims cannot be loyal American citizens.

None of that is even remotely true, of course. Sharia is simply the moral and religious code that Muslims follow in order to get close to God, the code that directs them to pray five times a day and fast during the holy month of Ramadan, which the march scheduled to coincide with. If you ask the organizers of the March Against Sharia, however, it's far more sinister than that.

What's truly bizarre is that the march's organizers and participants are declaring themselves to be protectors of LGBTQ and women's rights from Sharia law.

Take the example of one of its organizers, Scott Presler. In a tweeted that read "I'm a gay man. I simply want to live my life without being murdered for my sexuality. My life matters," he shared a picture of himself with a rainbow flag overlaid with the "don't tread on me" snake image. That tweet also included the hashtags "Orlando" and "Pulse," as if to imply that the horrific mass shooting last year in Orlando at a gay nightclub was a consequence of the influence of Sharia law in America. He also tweeted multiple times about supporting the end of female genital mutilation, and displayed a picture of a sign saying "Real Feminists March 4 All Women."

If the idea of bigots defending minorities sounds like a scene out of a strange dystopian fiction, you're not wrong. What's truly bizarre is that the march's organizers and participants are declaring themselves to be protectors of LGBTQ and women's rights from Sharia law.

These anti-Muslim extremists generally don't seem concerned about LGBTQ rights in America, as evidenced by their across-the-board support of the Trump administration and its distinctly homophobic policies. They haven't been mounting a huge show of support for LGBTQ issues, like campaigning for the entry of gay Chechen refugees who are being murdered for their sexuality.

And when it comes to the supposed theme of protecting women, Rana Abdelhamid, who founded the Women’s Initiative for Self-Empowerment, told HuffPost this:

Its rhetoric and actions empower bigots who target Muslim women and put us all at risk in the face of ... extremist violence. We want to feel safe. We want to be able to walk down the street and not feel like our lives are at risk because we choose to practice our faith, a fundamental human right. We also want hate groups to stop using us as an excuse for their bigotry.

Yet the march's organizers appear quite confident in their opinion that Sharia law oppresses women. Take the New York City March Against Sharia organizer Gavin McInnes, whose avowed anti-feminist credentials are only rivaled by his anti-Muslim, anti-Semitic, and white supremacist apologist views. According to The Daily Beast, McInnes actually believes that Jews hate white males, white terrorism is a myth, and women are the cause of domestic violence.

Don't be confused by ACT For America's rhetoric of "protecting" marginalized groups: this is an extremist group , and its actions are making America less safe for all of the Muslims who call this country home by propagating a twisted and perverted view of one of the world's great religions. Hate crimes against Muslims are already on the rise — and it's things like March Against Sharia that are pushing that forward.