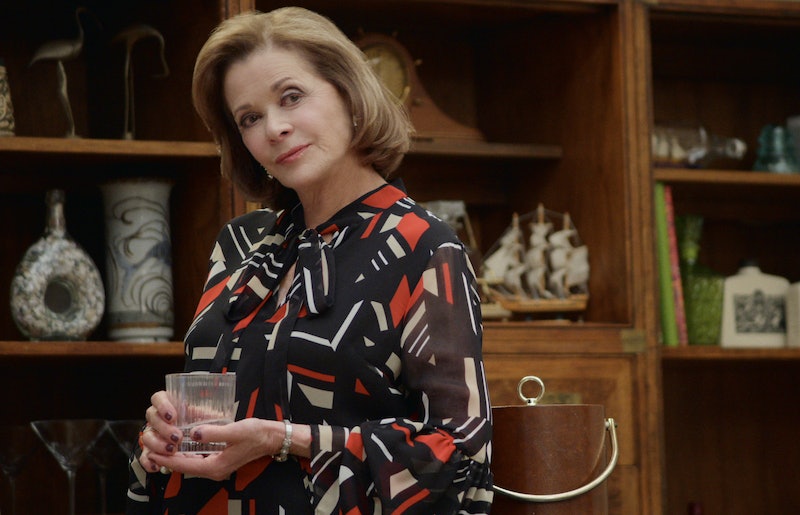 If you've been anxious to check back in with the Bluth family then you'll be pleased to know that the Arrested Development Season 5 Part 2 premiere date has finally been announced and it'll be here faster than you can say "there's always money in the banana stand." Netflix revealed on Tuesday, Feb. 19, via a press release that the popular series will make its way back to the streaming platform for the fifth season's final eight episodes on March 15, so start planning your St. Patrick's Day weekend accordingly because the Bluths are making a comeback.

And in typical Bluth fashion, their return is going to come with an endless array of drama in their wake. Buster's on the run; the boarder wall is still unfunded; and Tobias has become a Golden Girl (yes, really). So as you can see, it's business as usual when it comes to this particular family. But then again should we ever expect anything less from them? (That was a rhetorical question, of course.) Needless to say, March 15 can't get here soon enough and will bring back all of your favorite characters as well as their rather unique catchphrases that have now become somewhat legendary within the television circuit.

The official synopsis for the back half of Season 5 reads as follows, per a press release obtained by Bustle:

"In the second half of Arrested Development’s fifth season, pressures mount on the Bluth family as Buster heads toward a murder trial. The Bluth company is on the hook to build a ’smart’ border wall that puts them in debt and risks exposing a software hoax perpetrated by George-Michael. Soon the gay mafia is involved and it appears that even Michael can’t save the family this time. And Tobias becomes a Golden Girl."

It's anyone's guess as to how these complicated (and downright puzzling) storylines will all play out within the span of only eight episodes, but rest assured it'll be something you and your friends and coworkers will be talking about for weeks to come.

Of course, this latest installment in the Bluth family story has been a long time in the making. The first part of Season 5 was released all the way back in May 2018, so it's definitely been a while since we last checked in with our favorite highly dysfunctional family. However, this wouldn't be the first time a Netflix series chose to release a season that was split into two separate parts. Fuller House did the same type of thing during its third season, premiering Part 1 on Sept. 22, 2017, and releasing Part 2 exactly three months later on Dec. 22, 2107. Meanwhile, Unbreakable Kimmy Schmidt followed a similar pattern by splitting its fourth and final season into two parts — Part 1 launched on May 30, 2018, while Part 2 just hit the streaming service on Jan. 25, 2019. So in truth, this set up is becoming more and more common.

So if you're a little fuzzy about where things left off in the first part of Arrested Development Season 5, you may want to start rewatching the episodes now, so you'll be good to go in March when the show come back for what could be its final episodes ever.

More like this
'Stranger Things' Season 5 Will Echo Season 1 In A Key Way, The Duffer Brothers Confirm
By Kadin Burnett and Sophie McEvoy
Everything To Know About 'Indian Matchmaking' Season 3
By Brad Witter
Everything To Know About The Sandman Season 2
By Kadin Burnett
Netflix Reveals First Look At Wednesday In The 'Addams Family' Spinoff Series
By Bustle Editors
Get Even More From Bustle — Sign Up For The Newsletter