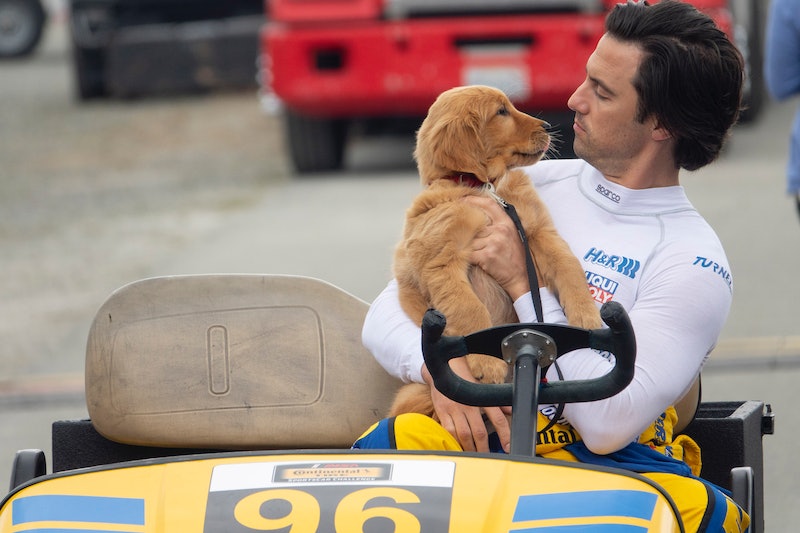 Dog movies are having a serious comeback now that everyone has almost recovered from 2008's Marley & Me. After 2017's A Dog's Purpose came its sequel, A Dog's Journey in 2019, and A Dog's Way Home in the same year — all three of which are based on novels by W. Bruce Cameron. A new dog film, The Art of Racing in the Rain hits theaters on Aug. 9, and this one is based on a book by Garth Stein. Like the Cameron adaptations, The Art of Racing in the Rain is not a true story, but a lot of it is based on reality, so it'll still be emotionally affecting. Mild spoilers ahead.

The Art of Racing in the Rain stars Milo Ventimiglia as Denny Swift, a race car driver in Seattle, who rolls with a dog named Enzo, voiced by Kevin Costner. The dog narrates the film and the book, and isn't content just being "man's best friend" — because that's what dogs do. Enzo has a goal of learning how to be as human as possible so he can be reincarnated as one.

Denny faces a lot of personal trials throughout the film, from struggling with tough racing competitions to facing his wife, Eve's (Amanda Seyfried) illness. Later, Denny must engage in a custody battle for his and Eve's daughter, Zoe (Lily Dodsworth-Evans/Ryan Kiera Armstrong). Through all of it, Enzo offers deep meditations on his owner's highs and lows. This dog has a lot more on his mind than "ball" or "squirrel."

In the book and film, Enzo's quest to master humanity comes from a Mongolian burial tradition for dogs that suggests some dogs will return as humans. It's true that in Mongolia a traditional belief posits that, in the reincarnation process, dogs are the form that comes before humans. A special burial practice involves a dog's owner whispering to their pet that they wish the dog will return in life as a human, both a site called Eternal Landscapes and Garth Stein's website states.

In addition to the real-life Mongolian tradition that informs Enzo's perspective, many inspirations for Racing in the Rain come from real life. In a website Q&A, Stein explained that he was a race car driver for some time, before he got into an accident that caused him to "semi-retire." Stein noted that the accident occurred, "ironically, while racing in the rain," which is a challenge that Denny excels in.

Stein also used a lot of research to inform other aspects of Racing in the Rain to make it realistic, including the unfortunate custody battle. "I have spoken with attorneys who have assured me that in custody and visitation battles... it is not inconceivable that, for instance, one side might try to drag things out in order to put the other party into extreme economic distress," the author wrote on his website.

As you probably have guessed, Enzo is based on a real dog, too, an Airedale that Stein owned as a kid. In the film, though, Enzo is played by a dog named Parker who appears to be a golden retriever or yellow lab. That might be because, according to Hollywood Paws, golden retrievers and yellow labs are among the most popular breeds to use in film and TV. Still, it sounds like Parker bears the essence of Stein's real childhood friend, as the author has said that she was "more as a sibling than a dog." If you can relate to that sentiment, then The Art of Racing in the Rain will probably hit home for you.