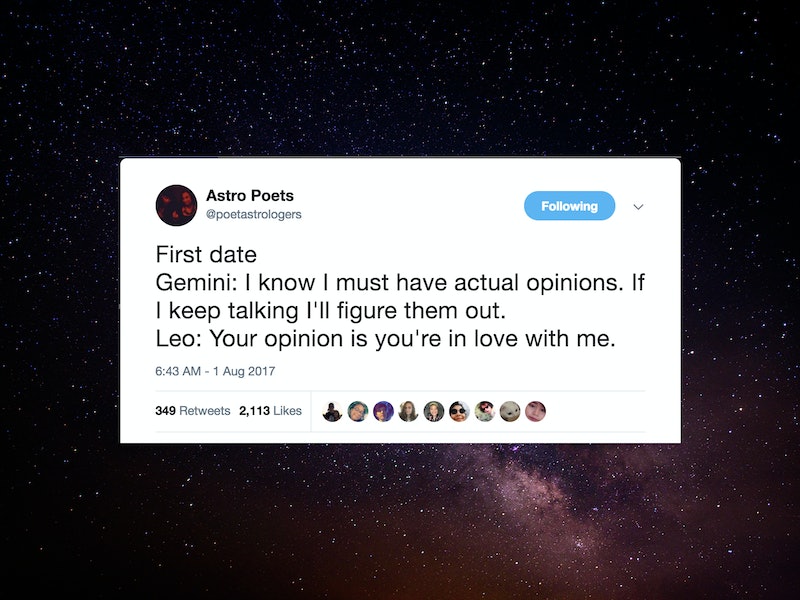 You're about to see one of your favorite Twitter accounts in print: the Astro Poets are getting a book deal. The Astro Poets are the hilarious duo Alex Dimitrov and Dorothea Lasky, who have been filling your timeline with laugh-out-loud horoscopes ever since November. Dimitrov and Lasky set up the Astro Poets account right after the election because, as Dimitrov told Elle, "we need as much magic and cosmic help as we can get, in addition to, you know, health care." Their witty tweets have won them a book deal with Random House, and so soon you'll be able to keep their spot-on astrological observations tucked safely away on your bookshelf.

Since they set up their account less than a year ago, the Astro Poets have gained over 160,000 followers on Twitter, all of whom love their on-the-nail humor, and the good-natured way they mock different star signs. Their success is largely due to their genuine writing talent: between them, the Astro Poets have published seven collections of poetry. But it's also due to their real passion for astrology, pop culture, and social media, which is why, as Dimitrov says, "no one's done astrology like us before."

The pair are great friends in real life, and Lasky says that making each other laugh "came naturally" — so it makes sense that they're so good at making the rest of the Internet laugh as well.

The release date for the book has yet to be set, so for now you'll have to be content with getting lost in the Astro Poets Twitter account for hours on end.