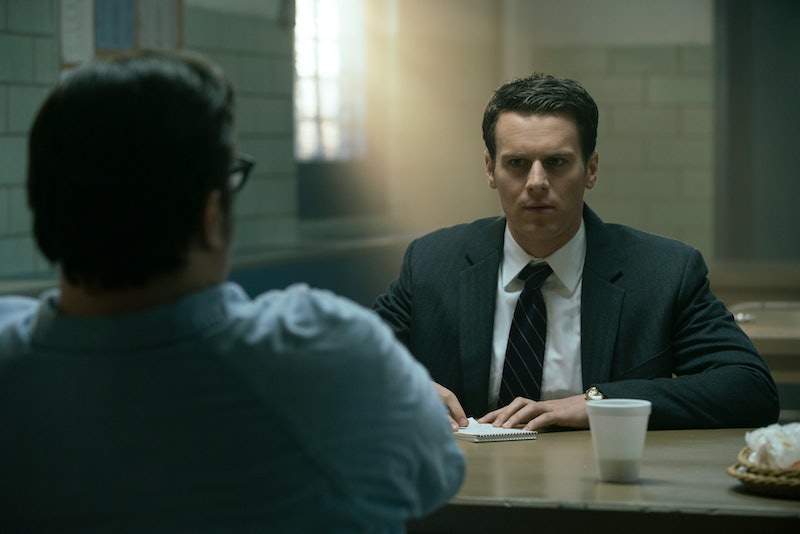 Agent Holden Ford and the FBI's Behavioral Science Unit are back, and they have a number of new cases to delve into in Mindhunter Season 2. One of the most upsetting real life cases they'll be exploring this season is the Atlanta murders of 1979–1981, often dubbed the Atlanta Child Murders. It's a case that many believe has to do with bigotry and fear, and the real life particulars are worse than anything fiction can drum up. Though one man was convicted for the murders, many believe that the other Atlanta Child Murders suspects are still out there, with Mindhunter author and criminal profiler John E. Douglas himself hinting as much.

The official FBI website reports that between 1979 and 1981, approximately 29 Black children, teens, and young adults were kidnapped and murdered, oftentimes by strangulation. The New York Times reports that at the height of the Atlanta Child Murders investigation, over 100 FBI agents were assigned to the case, and curfews were instituted while agents scrambled to find a connection in the deaths.

“Every day, every night, it seemed like they were finding bodies. The city was turned upside down. There was this big dark cloud over us,” Sheila Baltazar, whose stepson was killed in 1981, told The New York Times. “And we were just trying to hold on to our babies.”

The official FBI website reports that by late April 1981, agents began to notice a new pattern: the killer was dumping the victims’ bodies in the Chattahoochee River, likely to avoid further detection. Agents staked out the 14 bridges around the Atlanta metropolitan area, and on May 22, two agents stopped a car behaving erratically after they heard a loud splash in the water at almost 3 a.m. The driver was 23-year-old Wayne Williams, and he was eventually arrested on June 21, 1981.

Due to hair and fiber analysis, Williams was officially convicted of two of the murders on Feb. 27, 1982. Afterwards, law enforcement concluded there was enough evidence to link Williams to another 20 of the 29 deaths, and he was sentenced to life imprisonment.

Despite Williams being the only suspect brought up and tried in the case, many people still feel the mystery of the Atlanta Child Murders is still unsolved. In Mindhunter: Inside the FBI's Elite Serial Crime Unit, the book on which the Mindhunter show is based, Douglas first writes that "I believe the forensic and behavioral evidence points conclusively to Wayne Williams as the killer of eleven young men in Atlanta."

Douglas then goes on to say though that "despite what [Williams'] detractors and accusers maintain, I believe there is no strong evidence linking him to all or even most of the deaths and disappearances of children in that city between 1979 and 1981." Douglas ends by cryptically writing, "We have an idea who did some of the others. It isn't a single offender and the truth isn't pleasant."

Many believe this to be a reference to the fact that the Ku Klux Klan may have had a hand in some of the murders, since all of the victims were Black. In 1991, AP reported that police informant Billy Joe Whitaker testified at an appeal hearing that he heard Klansman Charles S. Sanders confess to one of the killings. Georgia Bureau of Investigation special agent Robert Ingram then took the stand to testify that then-director Phil Peters feared ″racial problems″ in Atlanta if the case was ever publicly linked to the KKK, lending credibility to the theory that the bureau buried all racist evidence. Today it's difficult to revisit that theory though, as all the tapes of Sanders' conversations were destroyed, as were the lab reports on dog hairs and carpet fibers taken from Sanders' home.

The request for a retrial was rejected then, but recently the case has been getting attention again. In March 2019, new mayor Keisha Lance Bottoms announced that they would be looking back into the Atlanta Child Murders. CNN reports that the point is not to vindicate Williams though, but to "provide closure to the families of victims who have long sought answers about their children's killers," said Bottoms.

"I've been going through this for a long time. I have been let down," Catherine Leach, whose son is one of the victims of the unsolved murders, told CNN. "It seems like the Atlanta missing and murdered children have been forgotten in this city ... I don't think it's right for all these kids to be killed in this city and nobody was concerned about it. I want some closure."

Mindhunter fans will be able to sleuth out the case themselves when the show premieres, and hopefully thanks to Mayor Bottoms, the real life victims will finally unravel the mystery that's plagued them for decades.

More like this
Where Is Oscar Torres In 'Only Murders In The Building' Season 2?
By El Hunt
Only Murders In The Building Introduces 4 Suspicious New Characters In Season 2
By Kadin Burnett
Natalia Dyer Opened Up About Steve & Nancy’s “Lovely” ‘Stranger Things’ 4 Dynamic
By Grace Wehniainen
These 2 Tragic ‘Stranger Things’ Finale Moments Were Improvised By The Actors
By Grace Wehniainen
Get Even More From Bustle — Sign Up For The Newsletter