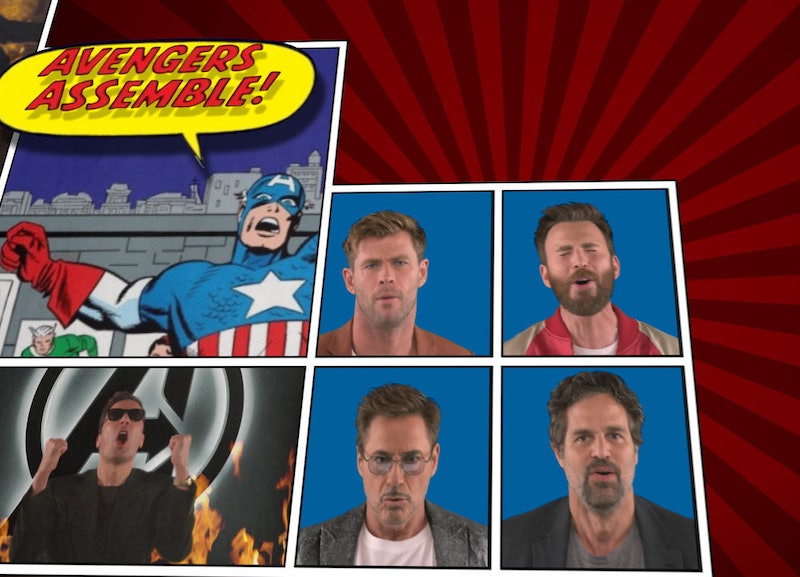 There's no doubt that the cast of all Marvel Cinematic Universe (MCU) films are quite talented. Their performances on screen are top notch, and of course, many of them have other talents outside of acting. So it's no surprise that they can carry a tune very well, a talent which was on full display when the Avengers: Endgame cast sang an MCU recap on The Tonight Show with Jimmy Fallon. And, to be honest, the video makes a really great case for a Marvel musical.

In a Tonight Show segment that aired Monday, April 22, the cast of Endgame — which included Robert Downey Jr., Chris Evans, Mark Ruffalo, Chris Hemsworth, Paul Rudd, Don Cheadle, Karen Gillan, Danai Gurira, Brie Larson, and Jeremy Renner — and host Jimmy Fallon sang a rendition of Billy Joel's "We Didn't Start The Fire," with most of the lyrics changed to create a musical MCU recap. Fallon acted as a sort of ringleader for it all, and the song goes through the major characters from the MCU, like Iron Man and Pepper Potts, to Captain America and Peggy Carter, and the fallen, like Black Panther and Spider-Man (RIP).

Of course, not to be outdone, Thanos also made an appearance in the video, though actor Josh Brolin did not. "Thanos and Infinity War, I can't take it anymore," Fallon sings on the track. Some other villains were featured too, like Obadiah Stane from Iron Man, Whiplash from Iron Man 2, and Red Skull from the very first Captain America movie.

There's really no better song to be rewritten as an MCU recap, because the original meaning and chorus — which they kept — is really an Avengers anthem. The chorus goes, "We didn't start the fire / It was always burning / Since the world's been turning... No we didn't light it / But we tried to fight it." In Infinity War, the Avengers tried to start the fire that was Thanos and his evil plan, but they failed. Now, they're getting ready to stomp it out for good in Endgame.

As on point as the performance may be, unfortunately, it's probably the only version of a Marvel musical we'll get out of these Avengers. However, while they can't do a musical segment in between their fight against Thanos, most Avengers agree there's one superhero who could and would pull it off, and that's Captain America himself, Chris Evans.

In a series of cast interviews with MTV News, during a round of Avenger "Most Likely To..." the question was, "Most likely to star in the Avengers musical?" And before Thanos could even snap, every single cast member said Evans. No one even had to think about it, including the man himself. "Probably me," he relented with a smile. "He's like 'Laaah,' big time jazz hands," Scarlett Johansson said. "I'll catch him singing the opening song of Oklahoma." Renner was the only deviation, answering that Downey would be the most likely to star in an Avengers musical. Just imagine how perfect a musical version of their epic Civil War battle would be.

Alas, while an Avengers Musical would be great, we're really just dying for Avengers: Endgame to hurry up and end out lives. Please and thank you.