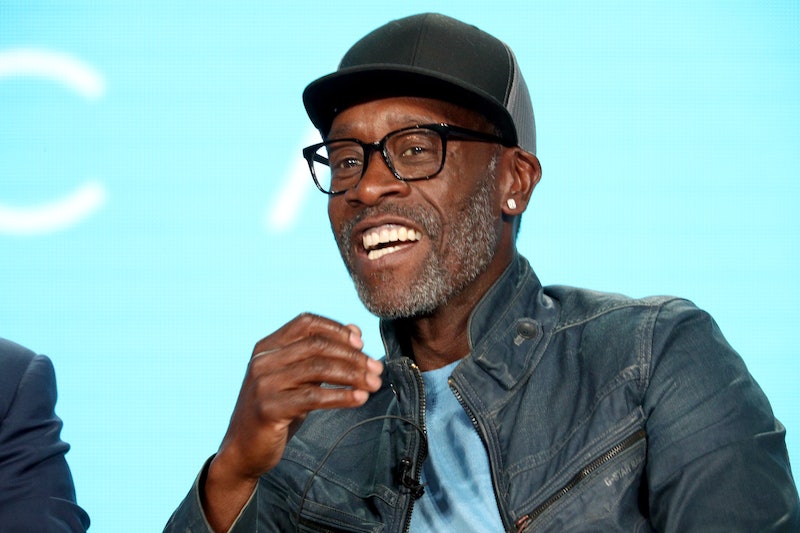 The Avengers franchise has to be pretty careful about spoilers — and apparently, not even the movie's stars know what's going on. The Avengers: Endgame plot was constantly changing, Don Cheadle shared with Entertainment Weekly, which means that the actors couldn't spoil things even if they wanted to.

Cheadle explained to the magazine that while filming, the stars aren't told the whole story, and some of the scenes might not even make it into the movie. Asked about Endgame's secrecy, Cheadle said to EW,

"Yeah, you just sort of get your part, and some explanation about what came before, and what goes after and kind of how things fit in. But it was still a pretty malleable process while we were shooting it, you know? We knew that things were going to be changing, even after they told us what it was going to be."

The magazine then asked if producers were "faking" the actors out from knowing what was happening. "No, they're kind of like, 'This folds into this, and then it's coming out of this, but we may change that, and we may get rid of this whole sequence," Cheadle replied. "You're kind of like, 'Okay guys, just tell me what to do, and please don't make me look stupid when it comes out.' You just don't know."

Given the cast's spoiler-heavy interviews during press for past Avengers movies, though, Marvel Studios really can't be too careful. After all, Mark Ruffalo famously spoiled the end of Avengers: Infinity War during a Good Morning America interview alongside Cheadle, who urged him to stop divulging the information. In fact, Ruffalo's spoiler became so notorious that he filmed five different Endgame endings, possibly to lessen the chances of him spoiling the real one.

"Mark's a real liability," Chris Evans told E! News of his notoriously loose-lipped costar. "They have to throw Mark off the scent."

Cheadle has also given Ruffalo a hard time, telling Jimmy Fallon in January that he tries not to do interview pairings with the Hulk actor after the GMA incident. "Why do I need that hassle, right?" Cheadle said at the time. "I don't need to be sitting next to him when he blows the whole reveal of the movie."

Ruffalo, along with Tom Holland, have shown that taking an abundance of caution to avoid spoilers isn't a bad idea. But it's still funny to hear the lengths that the producers are going to make sure the film stays secret — including withholding details from actors like Cheadle, who haven't leaked any spoilers on past press tours.

Aside from the spoilers, though, it sounds like all of the Avengers stars really do get along offscreen. Cheadle told EW that "there's not a lot of ego-tripping on the set," and that the stars see themselves as equal. "You've got seven people here with Oscars. Nobody can show off," Cheadle said to the magazine. "Everybody's just trying to be a team player, and that's good to see because if it was the opposite it would just have been an insufferable experience, every single one of them."

Fans will have to wait until the movie hits theaters later this month to learn the movie's true ending. And it sounds like it might be the first time many of the actors learn the ending, too.