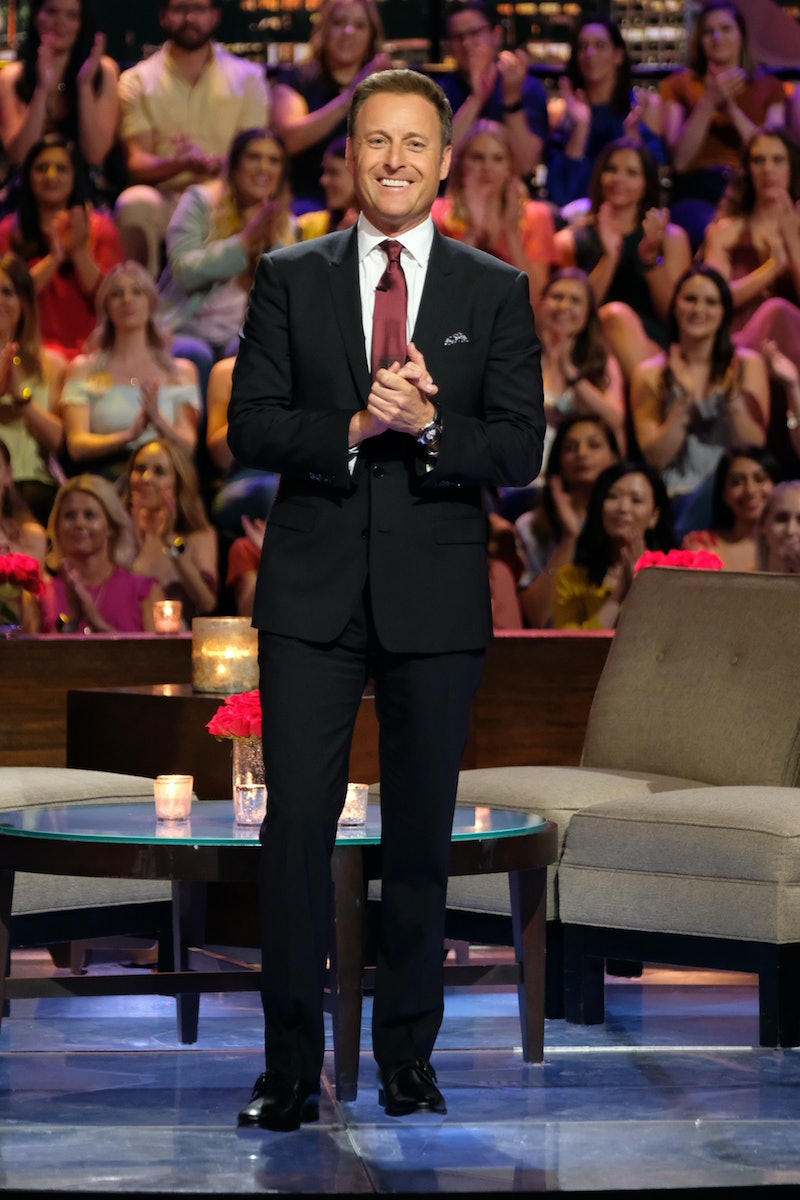 The holiday season has only just begun, but Chris Harrison has made Christmas come early by announcing all 30 of Peter Weber's official 2020 Bachelor contestants, which include a few very familiar names like Hannah. (And no, not that Hannah.) Along with the names, Harrison also dished out a few tantalizing details about each of the contestants, along with several hints about who could go far throughout the course of the season. Being the true Bachelor expert that he is, Harrison was careful not to give too much away, but his introduction of the contestants will definitely give fans a better idea of what Pilot Pete's journey will look like when the season kicks off on January 6, 2020.

ABC had previously teased some of the potential contestants for the season back in September on Facebook, but nothing had been made official at that point. Now, that's all changed. Thanks to the newly released information, fans can carefully assess each contestant at their leisure and try to figure out who has what it takes to earn that final rose. (That is, unless Hannah B. comes back in the picture in a more permanent way.)

Check out the list of Bachelor contestants below and start making those fantasy draft predictions ASAP...

Alayah is 24 years old and from San Antonio, Texas. She also has a background in pageantry, having been crowned Miss Texas 2019. Let's just hope the mansion won't have another Hannah B. and Caelynn situation on its hands.

Alexa is a 27-year-old esthetician from Chicago, Illinois. She owns her own waxing salon is a described as a "total free spirit" in her ABC bio. Perhaps her easy-going, positive attitude will win over Peter's heart.

Avonlea is a 27-year-old cattle rancher from Fort Worth, Texas. When she isn't busy managing the family's cattle ranching business, she does some modeling on the runway for local designers. According to her ABC bio, Avonlea is also a certified scuba diver and has traveled to almost all 50 states in an RV. Dean, is that you?!?!

Courtney is a 26-year-old cosmetologist from Venice, Florida. Her favorite pastimes involve boating with friends, tanning at the beach, and going out for drinks. She's also extremely claustrophobic.

Deandra is a 23-year-old home care coordinator from Plano, Texas. She also grew up with 10 siblings, which she claims has helped her learn how to stand out in a crowd — an important talent to possess on a reality dating show.

Eunice is a 23-year-old flight attendant from Chicago, Illinois. Given Peter's background as a pilot, these two might be a match made in heaven.

Hannah Ann is a 23-year-old model from Knoxville, Tennessee. Her passions include painting and interior decorating.

Jade is a 26-year-old flight attendant from Mesa, Arizona. (Anyone else sensing a pattern here?) Ironically, though, her ABC bio indicates that she's also very afraid of heights, which probably makes her work life extra stressful.

Jasmine is a 25-year-old client relations manager from Houston, Texas. She loves to travel, speaks fluent Vietnamese, and has a golden retriever named Gnarles Barkley. She deserves the final rose just for that A+ name alone.

Jenna is a 22-year-old nursing student from New Lenox, Illinois. Her ABC bio indicates that she's also a passionate foodie and has a pet goldfish named George.

Katrina is a 28-year-old pro sports dancer from Chicago, Illinois. According to her ABC bio, she prides herself on being the life of the party and hopes to one day become a college dance coach. She also has a hairless cat named Jasmine, after the Disney character, naturally.

Kelley is a 27-year-old attorney from Chicago, Illinois. She loves to travel and has been to 26 countries. Having a pilot for a husband could certainly help to keep that number growing.

Kelsey is a 28-year-old professional clothier from Des Moines, Iowa. She considers herself to be feisty and stubborn and also competed at Miss USA after being crowned Miss Iowa in 2017. Any chance that she and Alayah know each other?

Kiarra is a 23-year-old nanny from Kennesaw, Georgia. She hates sports, but her ABC bio states that she enjoys shopping, fashion, style and anything involving social media.

Kylie is a 26-year-old entertainment sales associate from Santa Monica, California. According to her ABC bio, her last relationship ended three years ago after her boyfriend cheated on her. Will she be able to open up and trust Peter with her heart?

Lauren is a 26-year-old marketing executive from Glendale, California. She also apparently has had exit interviews with all of her exes in the past to figure out what went wrong. So one could say she's been training for her Bachelor debut her entire life.

Lexi is a 26-year-old marketing coordinator from New York, New York. She's originally from Florida and is one of six siblings. She's also deathly afraid of frogs.

Madison is a 23-year-old foster parent recruiter from Auburn, Alabama. She has a passion for basketball, having won four state championships in high school, but has now dedicated herself to working with foster kids. She hopes to open her own orphanage some day.

Maurissa is a 23-year-old patient care coordinator from Atlanta, Georgia. In high school, she competed in the Miss Teen USA pageants and was even crowned Miss Teen Montana, though she states in her ABC bio that it was one of the worst times in her life.

Megan is a 26-year-old flight attendant from San Francisco, California. Despite her parents' divorce, she considers herself to be a hopeless romantic and enjoys hiking, skiing, and visiting the dog park with her dog, Bear, in her free time.

Mykenna is a 22-year-old fashion blogger from Langley, British Columbia, Canada. She's obsessed with Grey's Anatomy and dreams of starting her own charity someday.

Natasha is a 31-year-old event planner from New York, New York. she has a cross and dagger tattoo on her back, according to her bio. She's also notably the oldest contestant out of the bunch (and the only one in her 30s, at that).

Payton is a 23-year-old business development representative from Wellesley, Massachusetts. She also recently discovered that she has a long-lost fifth sibling, which sounds like something straight out of a soap opera.

Sarah is a 24-year-old medical radiographer from Knoxville, Tennessee. According to her ABC bio, she enjoys "being outdoors, paddle boarding, reading, listening to podcasts and binge watching a good series on a rainy day." She also loathes slugs.

Savannah is a 27-year-old realtor from Houston, Texas. Her interests include roller skating, shopping at Revolve, and indulging in Vampire Facials when the mood strikes.

Shiann is a 27-year-old administrative assistant from Las Vegas, Nevada. Her hobbies include traveling to foreign countries and competitive horseback riding. Peter can help her out in at least one of those areas.

Sydney is a 24-year-old retail marketing manager from Birmingham, Alabama. She loves to hike, dance, and bake, and considers Valentine's Day to be her favorite holiday, despite the fact that she's been hurt by love in the past.

Tammy is a 24-year-old house flipper from Syracuse, New York. She considers herself a tomboy and even fought for her right to join the boys' wrestling team as a junior in high school. She went on to have a 7-1 record on the varsity team.

Victoria F. is a 25-year-old medical sales representative from Virginia Beach, Virginia. She also works part-time at a yoga studio and is looking for a guy who can make her laugh.

Victoria P. is a 27-year-old nurse from Alexandria, Louisiana. According to her bio, she lost her father at a young age and both her mother and sister have struggled with drug addiction in the past (both of them have been sober for three years now). She's also a former Miss Louisiana pageant girl and views The Bachelor as her shot of finding love.

Peter definitely has his work cut out for him this season.

This article was originally published on Sep. 17, 2019