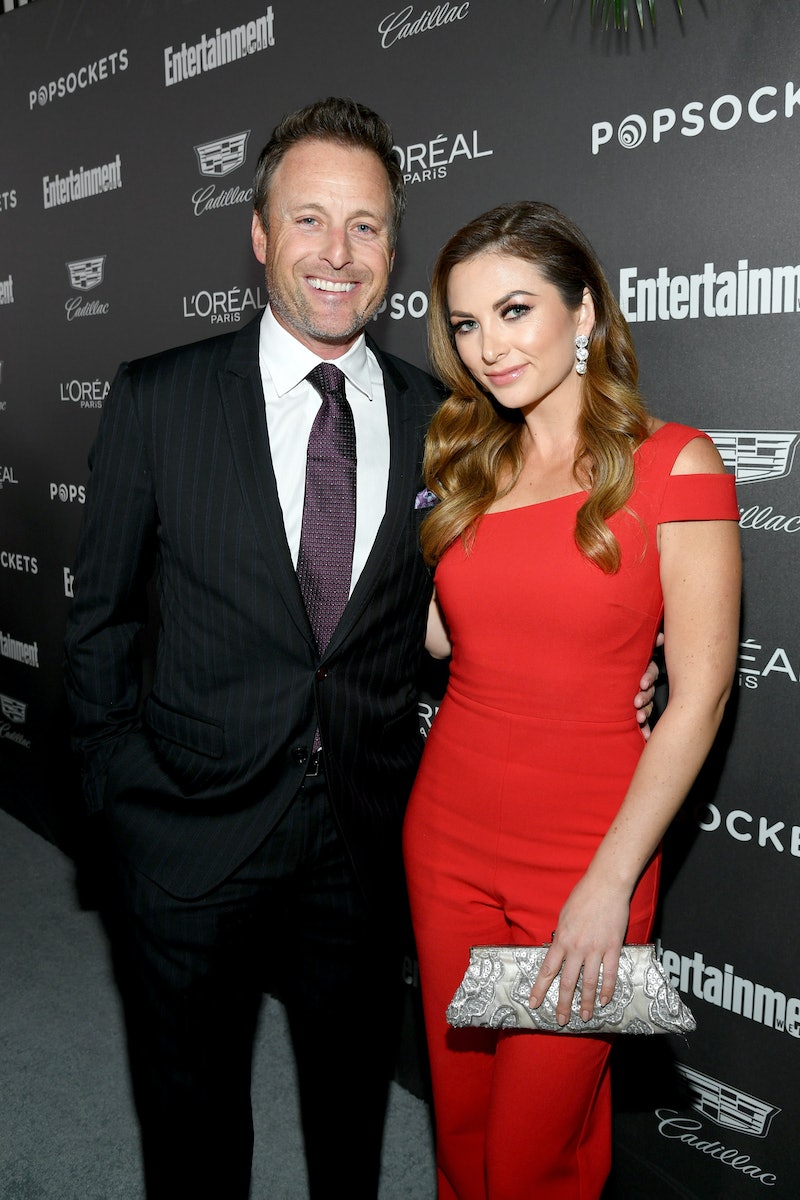 Has the host of The Bachelor finally found love? According to Entertainment Tonight, Chris Harrison and ET correspondent Lauren Zima are dating. The pair walked the red carpet together at Entertainment Weekly's pre-SAG Awards party on Saturday, Jan. 27. Neither Harrison nor Zima have publicly confirmed they're dating just yet, but if they're not, then Zima's co-workers are going to have some explaining to do on Monday morning since her outlet broke the news.

It seems Zima may have given ET the OK to share her happy news since she posted a photo from the event to Instagram. The only caption she provided to the cute picture of her and Harrison on the red carpet is a red heart. But she did share one more photo of the two of them together on her Instagram Story. "He's great at parties," the journalist wrote on their snuggly photo.

A party insider told E! online that Harrison and Zima were looking extra cozy throughout the evening. "Chris had his hand on Lauren's back as they waited at the bar," the source told E! News. "They looked very coupley and Chris was whispering in Lauren's ear."

Since his 2012 divorce from high school sweetheart Gwen Harrison, Harrison has been a bachelor himself — just not The Bachelor, although more than one fan has suggested he step into the role over the years. In a 2016 interview with The Daily Beast, the reality show host revealed that work is one of the primary factors that's kept him mostly single in recent years. Just because his busy schedule isn't exactly conducive to romance that doesn't mean that Harrison isn't looking for love. "I'm a hopeless, helpless romantic just like everybody else, so hopefully I’ll follow my own advice one day," he told the outlet.

If ET's report is any indication, then Harrison may finally have done just that, and he couldn't have picked a better person. Zima is a journalist who is known for her celebrity interviews, which suggests she knows what it's like to have a busy schedule. More importantly, she and Harrison have known each other for some time. She's interviewed The Bachelor host on more than one occasion over the years, and as recently as Jan. 15, she had an exclusive interview with Harrison about the upcoming season of The Bachelorette.

Devoted members of Bachelor Nation may even have seen this couple coming. On Dec. 6, Zima shared a photo of herself with Harrison and a poster of this season's Bachelor Colton Underwood. "The two most important men in my life, TBH," the correspondent captioned the picture. Not long after she shared the pic, Harrison commented, "The most dramatic interview ever. Another great interview and chat LZ!"

It's way too soon to start handing out roses, but it certainly sounds like Harrison has finally found his match. And while they didn't come together in the manner that most couples find love in Bachelor Nation, fans can take heart in knowing that it definitely sounds like The Bachelor played an important role in bringing Zima and Harrison together.