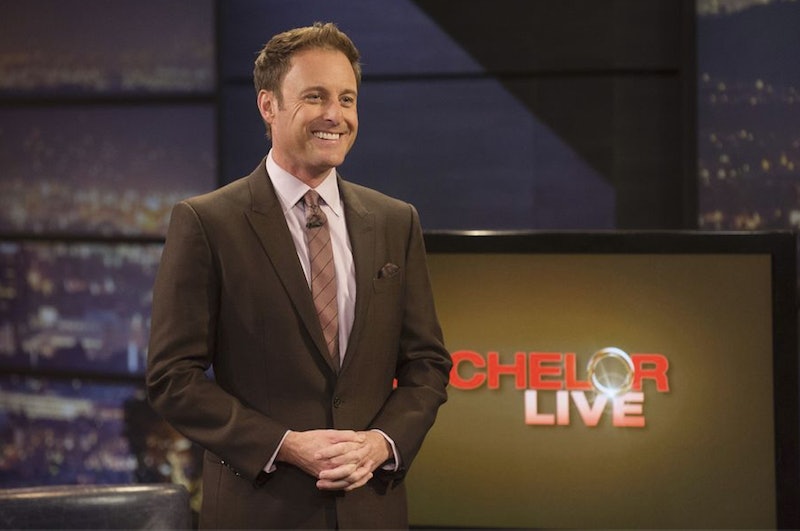 The Bachelor and its spin-offs continue to ride a 15-year legacy that's still going strong. Host Chris Harrison is the face of The Bachelor empire, also known as an American obsession. The country has watched Harrison matchmake countless hopeful singles, and he's been there to walk contestants through every step of the way for over 30 seasons of the ABC show and spin-offs (21 Bachelor, 12 Bachelorette, three Bachelor Pad, and three Paradise). But the man himself still remains somewhat of a mystery. Who is Chris Harrison, really?

Harrison's personal identity has been somewhat lost in the Bachelor shuffle, as he's become public figure who's synonymous with the show. When fans hear about Harrison, he's likely spilling tea on cast members, hanging out with cast members, or chilling with fellow celebrities. It's rare that Harrison opens up himself or expresses interests and life outside of the show.

But of course, there's more to the 45-year-old host than meets the eye. The depths of the internet have further intel on Harrison, like his past, family life, dating life, and details that don't have to do with The Bachelor. A few weeks into another season of The Bachelorette, this run starring Rachel Lindsay, fans can learn a little bit more about the show's host here.

1. He Originally Wanted To Be A Soccer Star

Harrison didn't always dream of being the Bachelor guy. The Texas native attended Oklahoma City University on a soccer scholarship and even studied sports broadcasting. "His sole goal in life was to play soccer,” his mom Mary Beth said. Maybe there's still time?

2. The Bachelor Isn't His First Rodeo

Although Harrison is the reigning king of The Bachelor, and really became famous because of it, the show isn't where he got his start (regardless of hosting since Season 1 way back when). The TV personality has hosted shows like Designers' Challenge on HGTV, Mall Masters on GSN, Hollywood 411 on the former TV Guide.

In the rare occasion that he's asked about himself in interviews, Harrison doesn't shy away from his former marriage to his college sweetheart. Since divorcing a few years ago, Harrison occasionally posts photos with their two children — a daughter and son. Although Harrison is associated with bachelors and bachelorettes, he's a total family man.

4. He Doesn't Sleep Around

Although the single host helps people find love (and hook up), he's admitted that he isn't totally good at dating in real life, particularly sleeping around. "I would love to say I’m the guy who sleeps around, but I’m just not. That’s not my thing. Tried. I’m not good at it. It’s exhausting," Harrison told People magazine.

5. He's Worked Behind The Scenes

In 2014, Harrison co-executive produced two back-to-back episodes of Bachelor in Paradise. I have a feeling if he worked behind the camera some more, things could be a lot more interesting. The guy knows what makes for good TV.

In 2015, Harrison took his experiences from the show and published The Perfect Letter, a fictional romance novel about trials and tribulations of love. The book didn't get the best reviews, but at least it spices up his resume?

The host constantly shows lots of love to contestants on and off the show, but Harrison is still part of a tight-knit crew of dudes from home. “When you have boys, true boys, nobody’s safe,” he told People about his buddies, who keep him in check. “They don’t care what you do. It’s like we’re back in high school giving each other crap.”

8. He Was On Sabrina the Teenage Witch Once.

9. No, He Hasn't Dated Anyone From The Bachelor

...Or so he claims. Regardless of those Andi Dorfman dating rumors, Harrison claims he hasn't been romantic with a contestant, but wouldn't totally rule it out either. At the end of the day, Harrison's another single guy just looking for love. "I’m a hopeless, helpless romantic just like everybody else, so hopefully I’ll follow my own advice one day," the host has said. Well, he's in good company.

Now someone find poor Harrison a wife before his FOMO gets out of control.