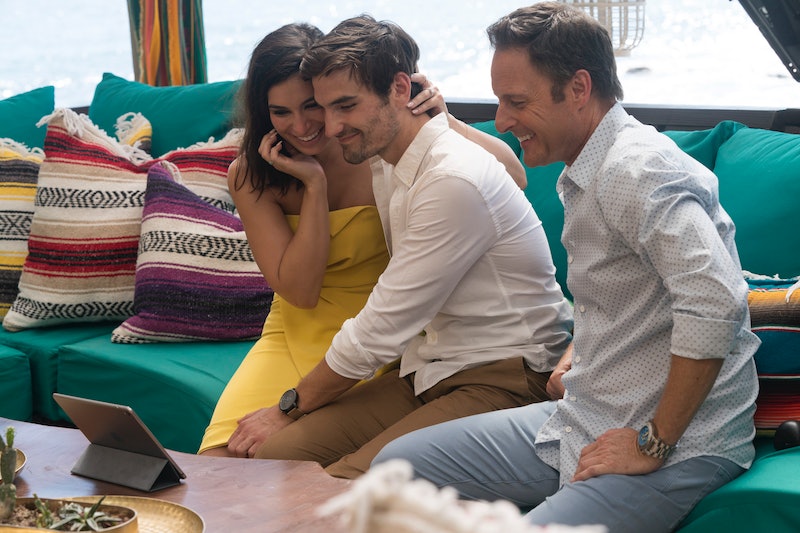 It's finally summertime, which means that it's almost time for a new season of Bachelor in Paradise. Unfortunately, according to a new tweet from the Bachelor godfather, Chris Harrison, the Bachelor in Paradise Season 6 premiere date was pushed back. But, don't fret, Bachelor Nation, you'll get to see some of your favorite reality stars take to Mexico soon enough.

On June 14, the Bachelorette host not only unveiled a new poster for the upcoming season of the ABC staple (complete with an all-too-appropriate "Love, on the rocks" tagline), but he also announced a new premiere date for BiP. He tweeted, "Life is a beach...and that’s a great thing! #BachelorinParadise is back Aug 5th!"

Now, BiP typically premieres in August, so this premiere date isn't anything too out of the ordinary. However, back in April, the official Instagram account for the show revealed a different BiP premiere date for Season 6. On April 10, the account posted a gif of the host in true BiP opening credits style, which they captioned with, "Hey Beaches! #BachelorInParadise returns for a new season on Monday, July 29!" Thanks to this latest update, fans will now have to wait one more week to get a glimpse at all of the drama featuring your Bachelor and Bachelorette faves.

According to BroadwayWorld.com, fans won't have to wait too much longer for some information on the upcoming season. On June 17, Good Morning America will release some new details about the series' sixth season, including who might be on it. Of course, Bachelor Nation is already well aware that some former Bachelor and Bachelorette contestants are already all but confirmed for Paradise.

On the Women Tell All special for Colton Underwood's Bachelor season, Demi Burnett hinted that she may try to find love, and have a little fun along the way, on the upcoming season of BiP. As Refinery29 noted, Harrison told her on the program, "You’re definitely a fun spirit to have. Something tells me we’ll probably see you again somewhere." While they didn't confirm where that "somewhere" would be, it stands to reason that the contestant will make her way to Paradise.

Another possible BiP cast member? Hannah Godwin, who made it to the final three on Colton's Bachelor season. In an interview with Us Weekly, published on March 17, she revealed that she's open to the experience and even told the publication who she might have her eye on. She said,

"I know that, personally, I caught major feelings in this whole entire experience, so I think I’d definitely be open to catching feelings, but hopefully it would be on a two-way street situation instead of just a one-way."

Hannah continued to say, in regards to some of the potential Bachelors heading to Paradise, “I think that there’s a few really good options and I’d have to meet with them in person and see if there’s a connection,” She also added that there's one contestant from Becca Kufrin's season of The Bachelorette that caught her eye, “I don’t know. I think Blake [Horstmann]’s a cutie.”

Could Hannah and Blake find a love connection? Will Demi's fun spirit grace the beaches of Paradise? Fans will just have to wait until Season 6 of Bachelor in Paradise premieres on Aug. 5 in order to find out.