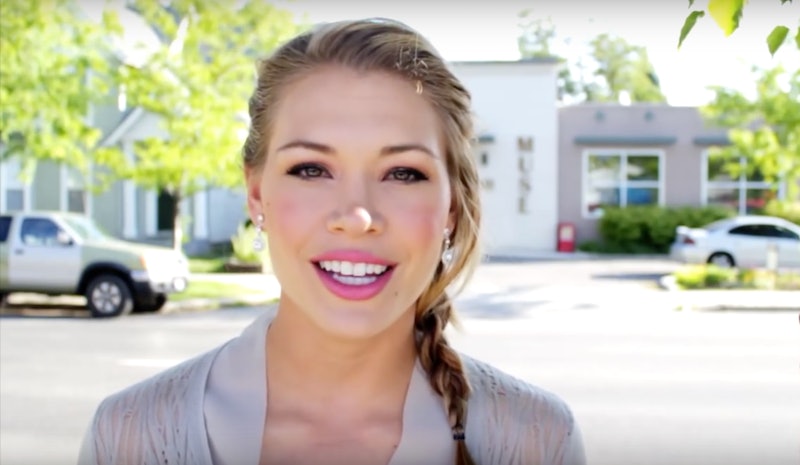 Because The Bachelor (supervising producer: Deborah Read) likes to save its twists and turns for television, contestant bios tend to skimp on details, instead opting for questions that often bear generic answers. That leaves a lot of stones to be unturned by viewers as the season presses on. Like, for example, did you know Krystal from The Bachelor was an actor on TV?

For the 29-year-old fitness coach, this is more than a fun fact — it's something that sparked an intense period of self-reflection that led her to her career today. While speaking with FitLifeTV CEO Drew Canole in 2016, Krystal explained that she moved to Los Angeles in 2012 to pursue a career in TV and entertainment. She'd done some previous work in Idaho — the evidence of which can still be found on her YouTube channel — but after arriving in the City of Angels, she realized it wasn't her scene. "It was just really shallow, and I realized I wasn't happy ... I felt really unfulfilled," she said in the interview.

After that, Krystal told Canole that she went through a rough time. She gave up her career, sold her belongings, and moved in with a host family. She continued:

"I was broke. I was struggling. I didn't know what to do. I was really confused and I honestly just felt empty I was really depressed. I was kind of putting on some weight, and I just felt so lost and struggling and embarrassed because I had people counting on me."

Eventually, though, she was able to get settled, and when a friend invited her along to a yoga class, she came to a life-changing realization: It was fitness that made her happy. After that, she started working out a lot and was able "gain control" over her life. She also began to lose weight, which for Krystal, boosted her self-confidence. Suddenly, things came into focus. Fitness had given her purpose, and she wanted to share that purpose with those that, like her, were also struggling and lost. As she said in the interview:

"I wasn't happy with myself and, for me, turning that focus inside and focusing on what made me happy, not even just happy, but fulfilled ... completely led me to a new path in fitness. [Now I want to] share the message of, 'Focus on you. Get up, get moving. Be the best you before you can be the best whatever [else] you need to be in your life."

Looking back, the change is clear. Krystal seems to have always been an optimistic, glass-half-full kind of person, but in a video titled "L.A. Lessons" that she posted in 2012, she sounds almost defeated. "You'll think to yourself, 'I've been busting my butt for so long, now I deserve an easier route. Finally, finally a break! No, don't believe it," she says in the clip. "There's no such thing as a break. There's no easy road. You'll be duped and embarrassed. You'll feel bad about it." Krystal being Krystal, she then turns it into a motivational speech about looking within yourself to persevere, but it certainly seems like she was confronting some hard truths.

Nowadays, she sounds grateful for where her path has taken her. When asked what her greatest achievement to date was in her Bachelor bio, she responded emphatically: "Finding my purpose as a health and fitness coach. I LOVE what I do for work." It remains to be seen whether or not she can find that same spark with Arie, but Krystal seems to be the kind of woman who gives all or nothing, so expect no less from her time on The Bachelor. Hopefully, her second stab at television will be more positive.