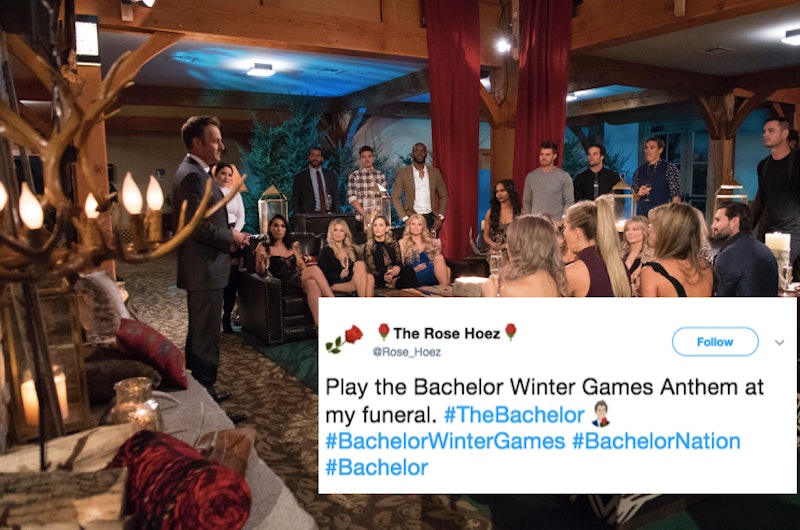 Before The Bachelor Winter Games premiered, it was kind of shrouded in mystery. Since this is the first season, it wasn't entirely clear how things were going to play out, but boy, was it worth the wait. Just like Bachelor in Paradise has a theme song, the Winter Games includes a little music, too. And if you're looking for the lyrics to the Bachelor Winter Games anthem, you've come to the right place.

Much like BiP, Winter Games is partly about love and partly about total cheesiness — which is a relief, because it would be a shame if a show about former Bachelor and Bachelorette contestants competing in the snow and attempting to fall in love was taken too seriously. So much of Tuesday night's premiere was comedic gold, from the actual sportscasters that signed on to host and provide commentary on the events to the way the teams entered involving an over the top parade, but nothing could have prepared fans for the moment when everyone gathered around a stage, put their hands over their hearts, and listened intently (and dramatically, if you were watching Josiah's facial expressions) to the anthem as it was performed.

Ready for these lyrics? Here we go:

To fight for love and more

Oh Bachelor, sweet Bachelor, we will compete for sure

In the time that we share, let’s go beyond compare

We want to see this through

We stand entwined, our future’s bright

To win your hand and heart

We want to see this through

The only musical bummer about the Bachelor Winter Games? There's no theme song (at least not yet), and it's a little harder to swallow knowing that, based on how truly fantastic this anthem is, the theme song would have been incredible. BiP's theme song is the best — because who doesn't love Bach stars running around the beach like the beginning of an '80s sitcom? — so it would have been great if Winter Games followed suit. However, this is just the first year, so if the show continues on in the future, maybe that's something producers will consider. Chris Harrison, this is the part where you work your magic.

There's so much more to love than just the anthem, though, because it was such a small part of the premiere episode. Aside from the more ridiculous aspects of the Winter Games so far, it seems like it might be a really good opportunity to get to know contestants from other countries — many of whom most American Bachelor fans had no idea existed. Plus, it already seems like there's a lot of potential for real love connections to be made between a group of unbelievably attractive people, and that's why we all love Bachelor franchise shows in the first place, right?

Of course, that's not to say that we shouldn't all appreciate the sillier aspects of the show, too. If nobody actually finds love, at least we'll all have been entertained for a month, and that's the true goal of shows like this one.

Now that the anthem has been performed, it's time for the Games to begin. If the rest of the episodes are anything like the premiere has been so far, this is going to be one of the best spinoffs the Bachelor franchise has ever given us.