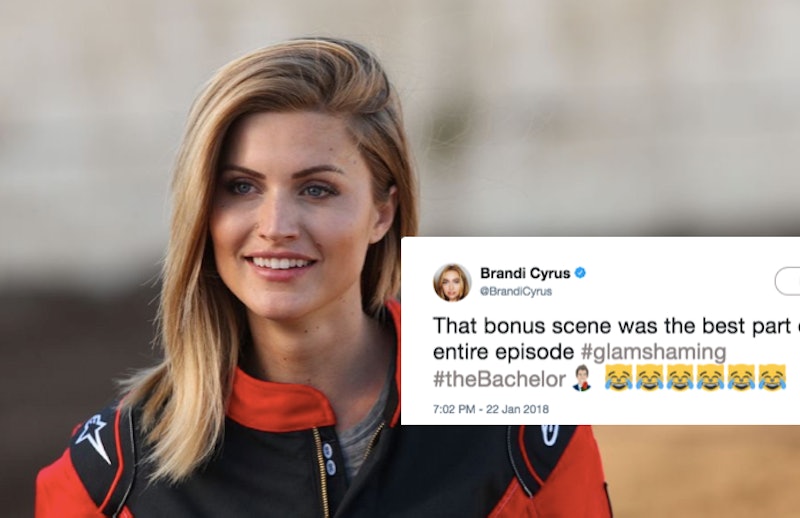 The Bachelor (senior producer: Lindsay Liles) is known for being a really fun show, but sometimes, it can get a little more serious than usual. Case in point: Monday's episode. But fortunately, the show threw fans a lighthearted moment at the end that helped made everything right again. The glam shaming scene on The Bachelor was exactly what fans needed after two hours of nonstop emotional chaos, and honestly, it's why we all watch this show in the first place.

Week 4 was all over the map, and for so many reasons. Sure, it was nice to see everyone get pumped about their trip to Lake Tahoe, and Arie formed some real connections with some of the women, like Bekah and Tia. But after seeing Maquel find out her grandfather died and leave the show, watching Bekah struggle with telling Arie her age, and the ever constant drama with Krystal (who, for some reason, seems to basically think she and Arie are already married), this episode felt a little more draining than usual.

Enter Chelsea and Marikh to solve this little issue for us all. At the end of the ep, they argued about glam shaming as the credits rolled, and it couldn't have been a more perfect note to go out on.

Basically, Marikh and Chelsea got into a meaningless argument about Marikh using a compass to brush her hair during their hiking trip, and it was incredible. Then, it got even better when Marikh revealed that she felt Chelsea was "glam shaming" her, which then led to Chelsea going on a major rant about how pro-glam she is.

It's hard to tell what the best moment of their scene together was. Marikh acting like she only brushed her hair because, in her words, "it looked like sh*t," or maybe it was Chelsea responding to Marikh confronting her. How did she possibly keep a straight face talking about how much glam means to heras a former model? It was unreal. And then, of course, there was her last minute comment about "ugh, millennials," while casually mentioning that she also fits in to that generation.

Fans have already taken to Twitter to express how much they loved this segment... which isn't a surprise, because it was really funny. Some are simply coming forward to admit how pro or anti glam they are, while others are truly living for this kind of stuff on The Bachelor this season. And like one fan pointed out in her tweet, it's also the kind of stuff that make Mondays worth it.

To be honest, using pro-glam as a humble brag (and a segway into talking about your past as a model) is a very Chelsea thing to do. Remember when it seemed like she was going to be this season's villain during the premiere? After this, she might actually end up being this season's hero.

Of course, it's not that the drama isn't fun to watch... and obviously, the sappy falling in love stuff is so much of what keeps fans coming back to the franchise season after season. But seeing these women have the opportunity to be funny in a way that doesn't involve the Bachelor at all? That seems to be where the magic happens.

If the Bachelor producers are listening, this is the kind of content that fans love to see. Can we have more of this every week, please? It's not like anyone's about to give up on this long running show (at least, not before watching Arie finally get his happy ending, anyway), but more stuff like this would really help ease the tension after those rose ceremony goodbyes.