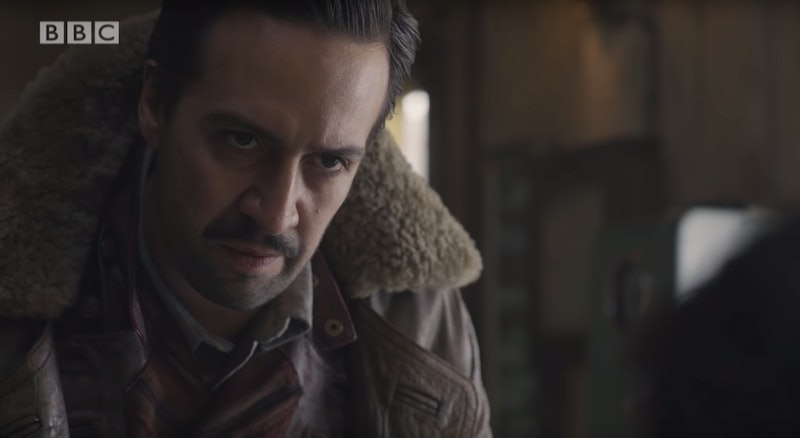 There's big news for fans of Philip Pullman's classic fantasy book series. On Sunday, Feb. 24, the BBC released the first trailer for His Dark Materials, a series based on the trilogy of fantasy novels. The show plans to tackle all three novels — The Golden Compass, The Subtle Knife, and The Amber Spyglass. The books are set in an alternate universe where human souls take the form of animal companions called daemons. In the first installment, Lyra Belacqua travels to the Arctic to rescue friends who have been kidnapped by dark forces, which is where the series is set to begin.

The short preview doesn't reveal too much about the upcoming show, but it does offer a first look at the all-star cast. According to The Verge, Dafne Keen will play Lyra, and the show also stars Lin-Manuel Miranda as aëronaut Lee Scoresby, Clarke Peters as Dr. Carne, Ruth Wilson as Church agent Mrs. Coulter, and James McAvoy as Lord Asriel. The first trailer offers a brief introduction to these characters, but did not offer a look at their animal counterparts, which will surely be a large part of the series. The clip also didn't offer a release date for the epic series, and only promised fans the show would be "coming soon" to the broadcasting network. (His Dark Materials is set to air stateside on HBO.)

Despite the lack of specific details on the show, the preview does seem to promise plenty of action. According to Deadline, Executive Producer Jane Tranter promised more details will be coming soon. "We wanted fans to have a tiny glimpse of His Dark Materials," Tranter said. "As with Lyra, there are many more worlds to discover as we start upon this epic journey." The outlet also reported that the show will be one of the most expensive British drama series to date.

The His Dark Materials adaptation has been in the works for a long time. The BBC greenlit the show in 2015 with Pullman serving as an executive producer on the project, per Variety. The author issued a statement following the announcement, writing:

"It's been a constant source of pleasure to me to see this story adapted to different forms and presented in different media. It’s been a radio play, a stage play, a film, an audiobook, a graphic novel — and now comes this version for television. In recent years we’ve seen how long stories on television, whether adaptations (‘Game of Thrones’) or original (‘The Sopranos,’ ‘The Wire’), can reach depths of characterization and heights of suspense by taking the time for events to make their proper impact and for consequences to unravel. And the sheer talent now working in the world of long-form television is formidable."

Pullman went on to praise Tranter's involvement in the project, and the network for taking on the ambitious show. Filming for the series began in 2018 in Cardiff, Wales, and it will be written by Jack Thorne and directed by Tom Hooper, according to Deadline. Additionally, the series will feature an expansive cast that will expand beyond the actors seen in the first preview.

This will not be the first adaptation of the His Dark Materials series for the screen. In 2007, a film version of The Golden Compass was released by New Line Cinemas. The series was not as popular as anticipated, but the new BBC/HBO series is a chance for the story to be told in full on screen, and it seems that fans are eager to see this incredible cast bring the novels to life in television form.

More like this
This Episode 6 Moment Foreshadows Viserys' Fate On 'House Of The Dragon'
By Grace Wehniainen
Nicola Coughlan Shared A Lady Whistledown Excerpt From ‘Bridgerton’ Season 3
By Grace Wehniainen, Alyssa Lapid and Sam Ramsden
Lin-Manuel Miranda & Tituss Burgess React To 'Little Mermaid' Casting Backlash
By Radhika Menon
'The Rings Of Power' Episode 7 Will Feature An “Unlikely Pairing Of Characters”
By Grace Wehniainen
Get Even More From Bustle — Sign Up For The Newsletter