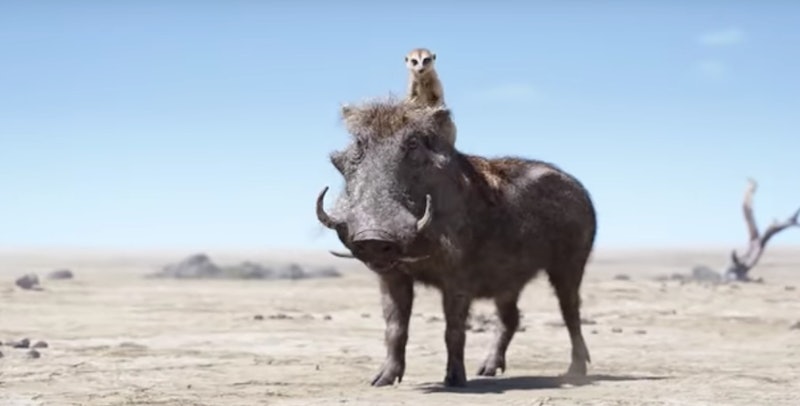 Spoilers ahead. The new live-action/CGI version of The Lion King doesn't include very many plot surprises, because it sticks pretty closely to the story of the original. But one fan-favorite moment from the animated film has been changed completely, and turned into a nod to another beloved Disney musical. No, Gaston doesn't make an appearance as a trophy hunter threatening the animals of the Pride Lands — though he totally would. The Beauty and the Beast reference in The Lion King happens much more seamlessly, when Timon (Billy Eichner) and Pumbaa (Seth Rogen) attempt to distract the hyenas as Simba (Donald Glover) sneaks up on Pride Rock.

Along with Nala (Beyoncé), the three determine that the best way to get the hyenas attention is to offer up some food. And Pumbaa is determined to be, hypothetically, the most delectable option. So while Nala and Simba make their approach, Timon stands on Pumbaa, faces the hyenas and launches into a dramatic rendition of Lumière's intro to the song "Be Our Guest." Timon only gets as far as the first actual sung lyric before the hyenas attack him and they have to make a break for it.

In the 1994 version, a similar musical distraction plays out, but in this case, Timon doesn't participate as willingly. While scheming their attack, Simba (Matthew Broderick) tells Timon (Nathan Lane) that they need live bait to create a diversion. Timon responds, "What do you want me to do, dress in drag and do the hula?" And well, that's exactly what happens.

The hula scene and that short original song might not have fit into the world of the live-action movie as well as it does in the cartoon. (Where would Timon get his grass skirt, for a start?) "Be Our Guest" is anachronistic too, but in a way that weirdly works — probably because audiences are already on the lookout for Easter eggs.

Disney movies have a history of referencing each other in an Easter egg hunt that goes back decades. For example, Mickey Mouse has a cameo in The Little Mermaid, and a figurine of the Beast appears in a scene in Aladdin (the animated original from 1992). Scar from The Lion King is a fur rug or cloak in Hercules, which is kind of a dark one.

While 2019's The Lion King isn't a shot-by-shot remake of the original and includes new dialogue and scenes, it doesn't make very many changes to the actual action. The scene when Timon breaks out into a song from Beauty and the Beast, which predates the original Lion King by three years, is definitely one of the most noticeable departures.

There are several other cross-Disney movie references in the canon, so in a way, the new Lion King's hat tip to Beauty and the Beast continues an already honored animated Disney movie tradition in a new way. Don't look for Eichner's version of "Be Our Guest" on the soundtrack however — this performance is just a fun gag.