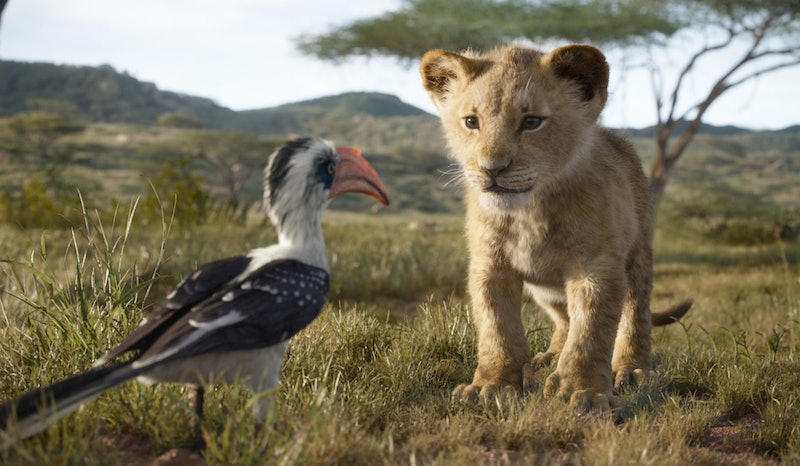 Back in 1994, Disney's animated The Lion King hit theaters and secured its place in hearts of all ages. And while the soon-to-be released live-action version of the film primarily recruited new actors to voice its beloved characters, one original cast member has returned for a reprise. However, the latest Lion King cast photo is missing James Earl Jones (who voiced Mufasa in both the original and the remake), and Twitter is decidedly not pleased.

To be fair, there's a lot to love about Disney's new Lion King pic. First of all, it's super simple, yet also stunning featuring the cast in all black clothing standing proud against a dark blue backdrop. Then there's Beyonce (Nala), who definitely stands out in the center of the shot, thanks, in part, to her fiercely powerful stance. The overall star-power in the pic is pretty impressive, in general, and features celebs like Donald Glover (Simba), Seth Rogen (Pumbaa), and Alfre Woodard (Sarabi), among so many more.

The photo is pretty complete, except for one glaring absence in James Earl Jones. He's an indisputable icon, and the only person to have voiced his character in both the original and the modern version.

So, how is he not one of the main focuses — if not *the* main focus — of the newly-released press pic? That's exactly what many fans on Twitter are now wondering, and needless to say, they're not thrilled that he's been excluded — again.

"Aye ! Lion King and they production staff better put some respect on my dawg James Earl Jones name. why tf he not in none of these photo shoots," @_aintitjay wrote. Another fan, @_SincerelyAshB, chimed in, writing, "I’m seeing tons of promo photos for The Lion King & none included James Earl Jones & I feel disrespected." And finally, "WHERE IS MUFASA!!!!! WHERE IS JAMES EARL JONES!!!" a third user, @_nadia25 exclaimed.

Bustle has reached out to Disney for comment on Earl's absence from the photos, but had not heard back at the time of publication. And regardless of whether he's in the promo photo or not, that won't change the fact that he's most definitely a guiding presence in the film.

Jones' immediately recognizable voice has been all over the trailers for The Lion King, saying iconic Mufasa lines, and taking us all back to 1994, when the animated film was originally released.

Director Jon Favreau teased Jones' powerful return to the story in an interview with Entertainment Weekly in April. "If you think that you are moved and have deep feelings when you hear his voice in our trailer, you can imagine what that must have felt like actually hearing him do it live," Favreau told EW. In fact, it was so impactful behind the scenes that even Favreau had to admit he wasn't exactly needed to give any kind of advice. "He would do a take and then he would ask me for direction and I honestly couldn't give an answer! I was like, 'You're Mufasa.'"

Jones might not be in the new Lion King cast photo, but there's no question that he's a crucial part of the film. There is, and will always be, only one Mufasa, and that's James Earl Jones.