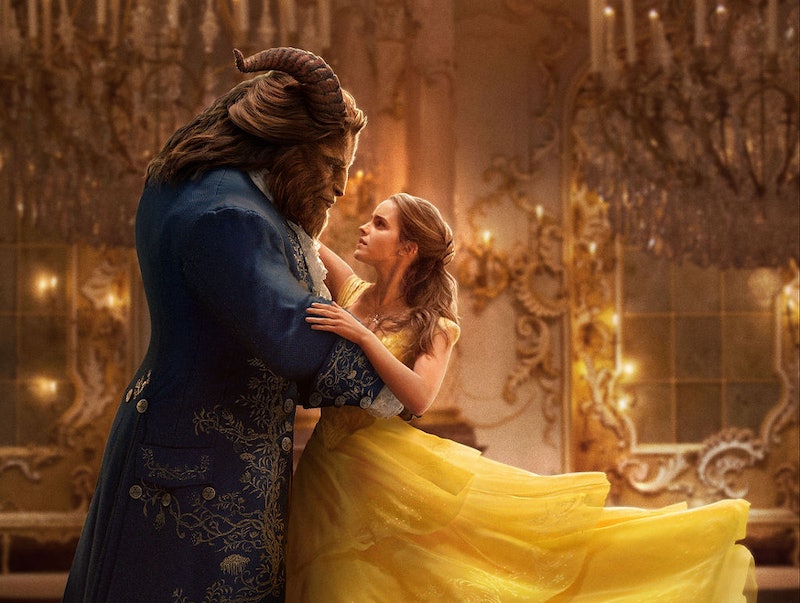 It's a tale as old as time: for as long as the story of Beauty and the Beast has been around, so has the label of "Stockholm Syndrome" been used to describe Belle and the Beast's romantic relationship. For those who've heard the term used in pop culture or read about the Patty Hearst case, it might seem, at first glance, that the duo's dynamic qualifies; after all, the Beast traps Belle in his castle and she resists before, eventually, falling in love with him. Yet while the relationship is certainly dysfunctional, to say the least, calling the Beauty & The Beast romance "Stockholm Syndrome" isn't accurate— and actually, according to experts, doing so can even be harmful.

"Labeling [Belle & Beast's relationship] as Stockholm Syndrome could trivialize the experience of those who may have actually developed such a disorder," explains Nicole Richardson, a private counselor and licensed marriage and family therapist based in Austin. "Belle is given a nice, clean place to stay, allowed access to books (one of her favorite things), she is fed well, able to go outside and play and even have contact with her father. She is not verbally [or] emotionally abused, beaten, or tortured in any way... while she is not initially permitted to leave, she also doesn't make (to my memory) many attempts to leave without permission."

As Richardson says, Belle and the Beast's relationship doesn't actually qualify as Stockholm Syndrome, which, as BATB star Emma Watson herself has even made clear, is defined by the Medical Dictionary has having three central characteristics: "the hostages have negative feelings about the police or other authorities, the hostages have positive feelings toward their captor(s)," and "the captors develop positive feelings toward the hostages." But that's not to say it isn't still seriously screwed up. Both the animated movie and the live-action remake see the Beast holding Belle in his castle against her will, essentially as his prisoner. For a while, she treats him with disdain, hating his actions and feeling determined to escape. Yet after a few short scenes in which the Beast doesn't act totally horribly towards her, Belle develops feelings towards him, seeing him as the "good guy" he really is underneath his dangerous exterior, and, eventually (spoiler alert!) falling in love with him.

It's pretty messed up, and it doesn't exactly send a message of healthy romance to viewers (especially younger ones) who are watching it all unfold. Belle and the Beast's romance may not meet the definition of Stockholm Syndrome, but "that is not to say that the relationship is healthy and without coercion," says Richardson, adding that "someone should make Beast watch the Consent Tea video and work on his codependence."

Zoe Cruz, the author of Beastia, a Beauty and the Beast retelling out Mar. 17, echoes this, saying that in her eyes, the characters' relationship "starts out rather abusive."

"We have a strong, intelligent, and kind heroine in Belle, who essentially falls in love with a man who looks like an animal, imprisoned her father for trespassing, kept her prisoner for months on end, and he frequently throws tantrums of rage when he doesn’t get what he wants and tears up un-living furniture when his closest friends are furniture," Cruz says. "He basically has lived in a place of anger and self-pity for 10 years."

Still, there's no denying that Beauty and the Beast, for all its flaws, is a thoroughly entertaining story. Generations of fans have been moved by the tale's gorgeous music and visuals, and the live-action remake, with the supremely likable Emma Watson as Belle, is a pleasure to watch. It's completely possible to be repelled by the film's central premise — an angry, controlling man holding an innocent young woman captive — and be drawn to the movie all the same.

But it's impossible to ignore the fact that underneath the catchy tunes and beautiful dresses is a dark, unsettling "romance," one that millions of viewers are seeing played out on-screen. And for young girls, especially, having a relationship built on fear and manipulation described as a "fairy tale" sends an unsettlingly dangerous message.

"We see women convinced they can change an abusive boyfriend or husband’s behavior because they love them," says Cruz. "They say things like, 'it will be different this time,' or 'he really loves me'... are those the themes and hopes we really desire to instill in the youngest generations and continue to perpetuate into their adult lives?"

Most certainly not. Yet for good and for bad, Beauty and the Beast will continue to permeate the culture for many years to come, and its message of dysfunctional romance will be an unfortunate blemish on an otherwise enjoyable tale.