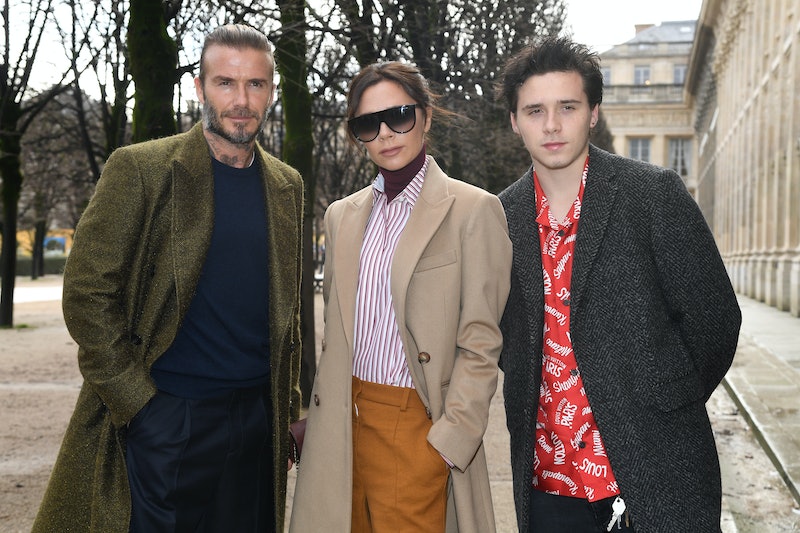 Getting a peek inside the Christmas celebrations of the rich and famous always provides some very interesting insight, and Beckham's family Christmas, which was captured across the family's various social media accounts, confirmed that David and Victoria Beckham's festive traditions are just as glamorous as we imagined. As reported by The Sun, the couple gave followers a glimpse inside their decadent Christmas Day shenanigans, which included the cooking of the turkey, and sipping on tequila and red wine, which some eagled-eyed fans noticed was worth around £250.

David kicked off the Beckham family Christmas celebrations with a shirtless selfie by the fireplace in their family home, the caption of which read "Good Morning and Happy Christmas Eve. Can you tell I’m slightly excited. chestnuts roasting on an open fire and all that." The former footballer also reached out to some A-list pals throughout the big day. Whilst wearing what appeared to be a pair of glasses made out of miniature Christmas wreaths, Beckham wished singer Sir Elton John and his husband, David Furnish, a Merry Christmas. The caption of the post read: "Merry Christmas Uncle Elton @eltonjohn @davidfurnish."

And whilst carving the all important turkey, Beckham shared an image to his 52.9 million followers with a caption that read "Turkey perfection @gordongram" - which might suggests that the Beckham clan used inspiration from the famous chef whilst preparing their Christmas dinner.

However, David wasn't the only Beckham to get into the festive spirit on social media this year. Brooklyn Beckham shared a variety of Instagram stories, one of which displayed younger brother Romeo pulling a funny face, as his Grandmother, Jackie Adams, danced behind him. According to The Sun, joining David, Victoria, Brooklyn and Romeo were 13 year-old Cruz and seven year-old Harper - who according to her mother's Instagram story, received a pair of ice skates within her Christmas gifts this year. In addition to Grandmother Jackie, other family members revealed to be taking part in the festivities were Victoria's sister Louise and her father, Tony.

According to the Manchester Evening News, other famous faces sharing their Christmas Day festivities online include Coleen and Wayne Rooney, who arrived back home in the UK for the festive period after Wayne signed with the U.S. football team, D.C. United last June. In a post on Instagram, the former Manchester United player said "Merry Christmas everyone. Enjoy your day." One third of the boyband Take That, Mark Owen, also took to Instagram to spread some holiday cheer. In a video message to his 56 thousand followers, the "Rule the World" singer said "Hi there, on behalf of the Owen household I'd like to wish you all a very merry Christmas," and also left a second post, in which he is dressed as an elf, with the caption "Ok the Christmas p.j’s are on...Hope the day has gone well for you guys and once again Merry Christmas. see you soon x"

So despite the fame, glitz and glamour, it appears that even the 'other half' hold the same wholesome Christmas traditions as the rest of us.