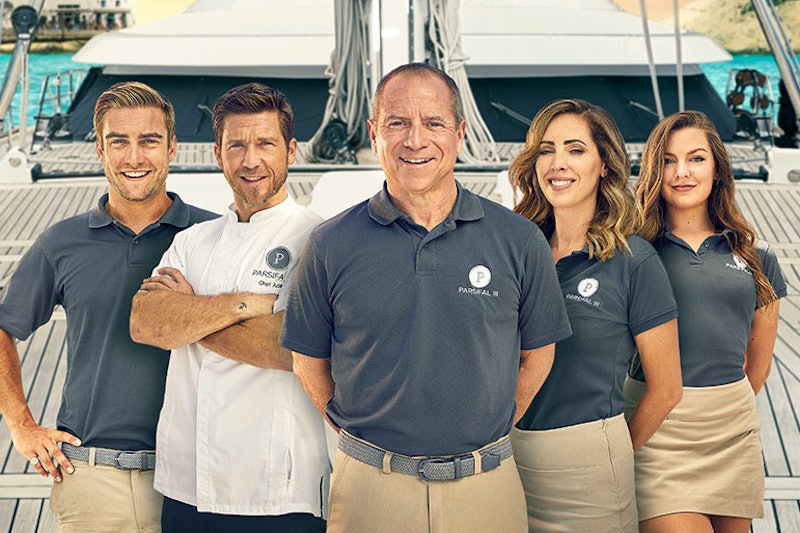 What’s more opulent that vacationing on a yacht? Adding sails. In Bravo’s new reality show Below Deck Sailing Yacht, a spin-off of the hit series Below Deck, the crew has ditched the motor for wind-powered adventuring among the Greek Isles. Other than that, basically everything is the same. The charter guests have outlandish requests, the sexually charged crew shares itsy-bitsy quarters, and the affable, fatherly captain tries desperately to steady the helm.

Despite the by-now familiar tropes — the hard as nails chief stew, the deckhand bro — the only returning cast member is Adam Glick, the renegade chef who longs to prepare a Greek mezze even though the guests have specifically requested sushi. (Why did they even come to Greece?!) Unused to seeing so many strange faces at sea, we ventured into the stormy waters of Instagram to figure out what we could learn about the newest deckhands and stewards.

Chef Adam Glick aka The Adventure Chef is back below deck. Since he last appeared on Below Deck Med, Glick has been road-tripping America like a real landlubber. He also heavily advertises the collapsible pocket chef’s knives he helped design for the gourmet cook on the go. Look how they fit in the pocket of his incredibly rugged apron.

The Canadian chief stew is no nonsense, warning her steward team during the series premiere that they won't be coddled. Her Instagram shows a softer side.

Shephard has been captaining the Parsifal III for a decade and working yachts in the hot sun since 2000. He recently posted this TBT of “What I looked like before Superyachting had its way with me.”

Duggan was basically raised on a catamaran and has been working boats since she was 17, mostly as a stew. Newly appointed to the deck crew, it’s her first time in the same department as her boyfriend Paget. If Instagram is to be believed, it seems like the couple survived charter season.

“Fitness freak” Paget met his other half when he landed a job working Ciara’s family’s catamaran. Now, the Englishman and his girlfriend live together on the Parsifal III year-round.

The Energizer Bunny of the crew has two Instagram accounts: one devoted to her sunny life as a professional stew and the other, @thatblondepirate, dedicated to fashion.

The South African stew is also a singer, with several singles she’s released under the name Georgia Rose.

The Parsifal III’s engineer seems like the cast member least likely to attract drama. His grid is a family photo album of vacations, playing with his daughter, and his January wedding.

In all, the Below Deck Sailing Yacht crew are sure to become Bravo faves in no time.