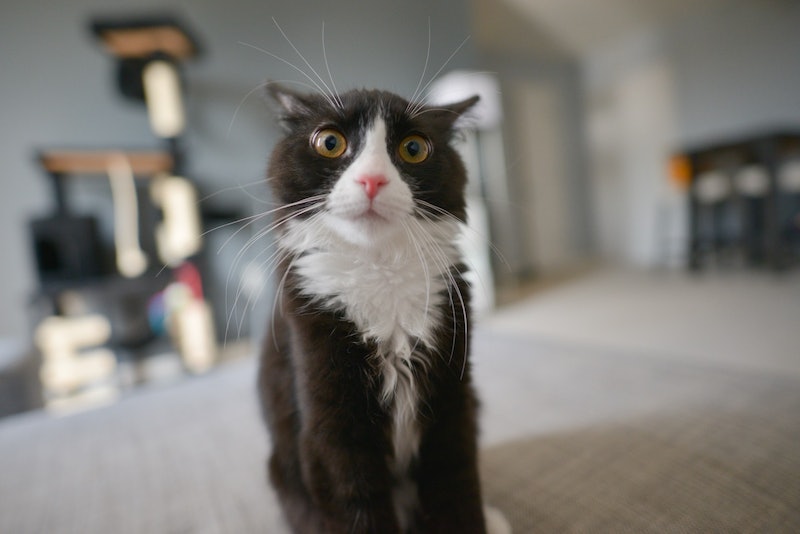 This just in: Coca Cola has announced a new drink that contains helium so you can enjoy a Coke while also making your voice super squeaky. And, if you believe that — you just fell for one of the best April Fools' Day jokes trending right now. While it seems like we've been living in a perpetual April Fools' Day since Nov. 9, 2016, that hasn't stopped people from pulling epic pranks.

While the internet is peppered with untrue stories every day, April 1 has some people (and companies) taking it one step further, because we could all use a good laugh. The best April Fools' Day pranks are the ones that are the most believable, and the closer to the truth something is the more likely people are to believe it. I mean, Coke really could contain helium, right? That's not as crazy as Donald Trump being president. Oh wait, that really happened.

If you haven't laughed in awhile, these pranks are bringing funny back because we could all use a little levity right about now. From epic airplanes to corporate onesies for adults, some of these jokes seem pretty realistic. And, why don't we have more adult onesies? What could be more comfortable than falling for Netflix's gag while relaxing in your new hot-pink, one-piece outfit?

Netflix launched a 24-hour live streaming video of Will Arnett (Arrested Development, BoJack Horseman) commenting on random objects and activities. The teaser on You Tube claims that subscribers can enjoy things like commentary on toasters toasting, grass growing, and fans blowing. "With Netflix Live, you can experience life's biggest thrills, right from the comfort of your couch."

Because the "live" video is almost an hour long it may have not been clear to everyone that this was a joke. Though that time they tried to split up their DVD and streaming services would have made a better joke, that actually happened in 2011, but Netflix abandoned the idea after users revolted.

This one is pretty self explanatory. Attach a stick to an object that says "voice activated" and watch as people try to chat with things like paper-towel dispensers.

T-Mobile punked users by announcing a hot-pink onesie to accompany its new "One" plan. The advertisement on You Tube says, "Introducing T-Mobile ONEsie—the world’s first full-body wearable that radically re-envisions the future of fashion, true mobility and the very meaning of unlimited coverage."

The onesie, which claims to be full of tech gadgets, is actually for sale for $40, but the tech aspect of it is fake. But, they look pretty comfy to me.

Because the average human attention span is just eight seconds, Hulu announced a new service dubbed Hu, TV Abbreviated that condenses all of your favorite shows down to eight seconds. Alas, this was an April Fools' Day gag, but if you want to check out what it would actually feel like to watch just a few seconds of your favorite show, check out these links: Seinfeld, The Mindy Project, and Empire.

Flying is kind of a pain in the butt. You know what could make it better? A triple-decker airplane with a swimming pool! That would sure make those long-haul flights more enjoyable. Apparently Emirates Airlines thought so too when it announced its plans to develop a flying hotel that also includes a gym, a game room, and a park. While this has been retweeted more than 8,000 times, it's a prank.

Who doesn't need an assistant that is also a garden gnome? Sign me up! The Google Gnome is like Siri for your yard, and it only answers your questions with puns. While this is a joke, I think it would actually be pretty cool.

Pets get treated more and more like people every day, so of course it only makes sense that they need their own Alexa that understands pet languages. Amazon thought enough people would fall for this gag that they even created an instructional video about to use the Petlexa, and it's hysterical.

There's an episode of Parenthood where Drew asks his mom if he can borrow her toothpaste, and she remarks that toothpaste should come in more fun options like "cheeseburger flavor." Well, Burger King announced on Twitter that you can enjoy the taste of the Whopper all-the-live-long day with its new WHOPPER Toothpaste. Sarah Braverman would be thrilled.

You track everything else in your life, so why not trips to the bathroom. And, perhaps your friends want to stay updated on your bathroom habits as well. Quilted Northern announced its new wearable bathroom tracker to document all of your bathroom data. Thankfully, this is a joke, because no one wants this information. Please keep it to yourself.

Google Maps announced that Ms. Pac Maps could turn your mapping experience into a beloved game of Ms. Pac-Man, because who doesn't love Ms. Pac-Man, and games? If you need to waste more time on your phone, you can actually play Ms. Pac Maps by clicking on the insert coin icon at the bottom of the screen. Enjoy!