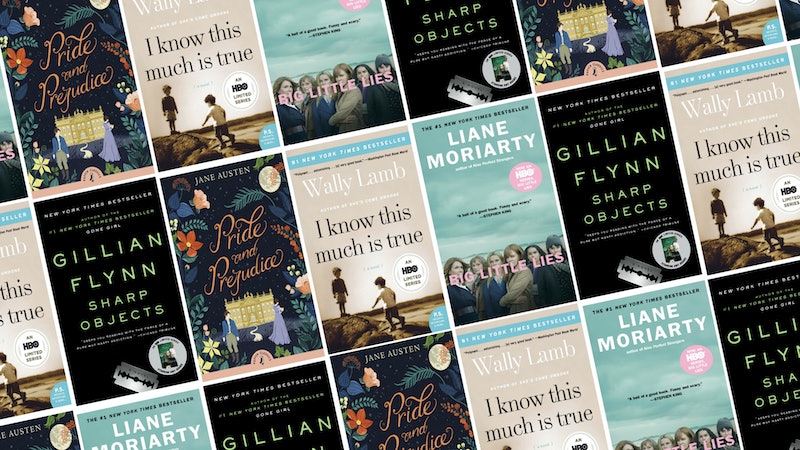 HBO Max launched on May 27 with a killer content lineup. With Warner Bros. films, the Criterion Collection, and the full HBO lineup at your fingertips, HBO Max might just be the perfect streaming service to jazz up your summer staycation this year. And Bustle has compiled the 10 best book adaptations available to stream on HBO Max now, so that you can get your literary marathon-watching on.

On the list below, you'll find the best of the best HBO shows, curated films, and HBO Max originals inspired by books. No matter if you're looking for a long-running, nostalgic series to dive into, or want a bit of light fun for your afternoon movie-watching pleasure, HBO Max has you covered with classics like Pride & Prejudice and new favorite adaptations like Big Little Lies and Sharp Objects.

Check out the 10 best book adaptations available on HBO Max at launch below.

Janeites, rejoice! Pride & Prejudice will be available on HBO Max, thanks to the streaming service's partnership with Warner Bros. You love the classic story of Elizabeth Bennet and her love/hate relationship with the dashing and awkward Fitzwilliam Darcy, and now you can enjoy it on demand! Both the 1995 miniseries and the 1940 film are available to watch on HBO Max.

The Sisterhood of the Traveling Pants by Ann Brashares

Warner Bros. will also bring its 2005 film adaptation of Ann Brashares' 2001 novel, The Sisterhood of the Traveling Pants, to HBO Max. When they're forced to part ways for the summer, rising juniors and BFFs Lena, Tibby, Bridget, and Carmen make a plan to share a pair of thrifted jeans that miraculously fit them all. The story follows each girl during her time in possession of the pants, documenting the friends' activities over that one fateful summer.

The Alienist by Caleb Carr

Set in Gilded Age New York City, Caleb Carr's The Alienist centers on the eponymous psychologist, Dr. Laszlo Keizler, and police commissioner Theodore Roosevelt as they search for a serial murderer in Manhattan. A limited series, also called The Alienist, premiered on TNT in 2018, and a sequel, based on Carr's The Angel of Darkness, is set to premiere this year. The Alienist, along with several other TNT shows, will be available to watch on HBO Max.

HBO's Sharp Objects adaptation was all anyone could talk about in 2018, and now the limited series is available to watch on HBO Max. Based on Gillian Flynn's novel of the same name, the limited series stars Amy Adams as Camille, a young journalist pulled back to her podunk hometown by a recent, grisly news story. One girl has been murdered in Wind Gap, Missouri, and another is missing. The town already holds few good memories for Camille, and going back will mean confronting her own dark past.

Every Owens woman knows that falling in love is dangerous, because a malicious curse will claim the lives of the men they love. The curse hasn't stopped Sally from falling in love, nor has it stopped her sister Gillian from chasing after it. Now, both their paramours are dead, one of them by their own involvement, and when investigators start snooping around, the sisters will need a little bit of magic to help get them out of a bind. Alice Hoffman's Practical Magic prequel, The Rules of Magic, is in development at HBO, and you can watch the Practical Magic film adaptation now on HBO Max.

HBO Max will be the exclusive streaming home of Studio Ghibli films in the U.S., which means subscribers get to watch Hayao Miyazaki's Academy Award-nominated adaptation of Diana Wynn Jones' Howl's Moving Castle. In a world in which fairytales are true, a young girl named Sophie runs afoul of the Witch of the Waste, who curses her into premature old age. Living as an old woman, Sophie takes a job as a domestic servant to Wizard Howl: a powerful magician and the Witch of the Waste's ex-boyfriend. Court intrigue, romantic squabbles, and a whole lot of magic make this novel a terrifically fun read.

I Know This Much Is True by Wally Lamb

Mark Ruffalo plays a pair of identical twins in the recent HBO adaptation of Wally Lamb's novel. I Know This Much Is True centers on Dominick, a man reeling from the loss of his child and his subsequent divorce, and his sensitive brother, Thomas, who has been diagnosed with paranoid schizophrenia. Caring for Thomas in his middle age wasn't what Dominick had planned, but, then again, neither was losing his family.

The Boondocks by Aaron McGruder

If you loved The Boondocks on Adult Swim, you'll be happy to know that the series is now streaming on HBO Max. Based on Aaron McGruder's comics of the same name, The Boondocks centers on Huey and Riley Freeman — a precocious civil rights activist and his scheming younger brother — who live with their cantankerous Granddad in the suburbs of an unidentified, Midwestern city. HBO Max also has plans to revive The Boondocks for all-new fun with the Freeman family.

Three women whose children attend the same school become fast friends ahead of a catastrophic event in this lauded mystery novel from Truly, Madly, Guilty author Liane Moriarty. Big Little Lies aired for two seasons on HBO, extending the story past the bounds of Moriarty's novel, and it's now available to watch on HBO Max.

HBO Max launches with Pretty Little Liars, the 2010 series adaptation of Sara Shepard's book series of the same name. Loosely based on 16 novels Shepard released between 2006 and 2014, Pretty Little Liars follows a small group of friends whose leader, Alison, goes missing. They begin receiving letters, presumably from Alison herself, but when their friend's body turns up, the girls realize that someone is stalking them.