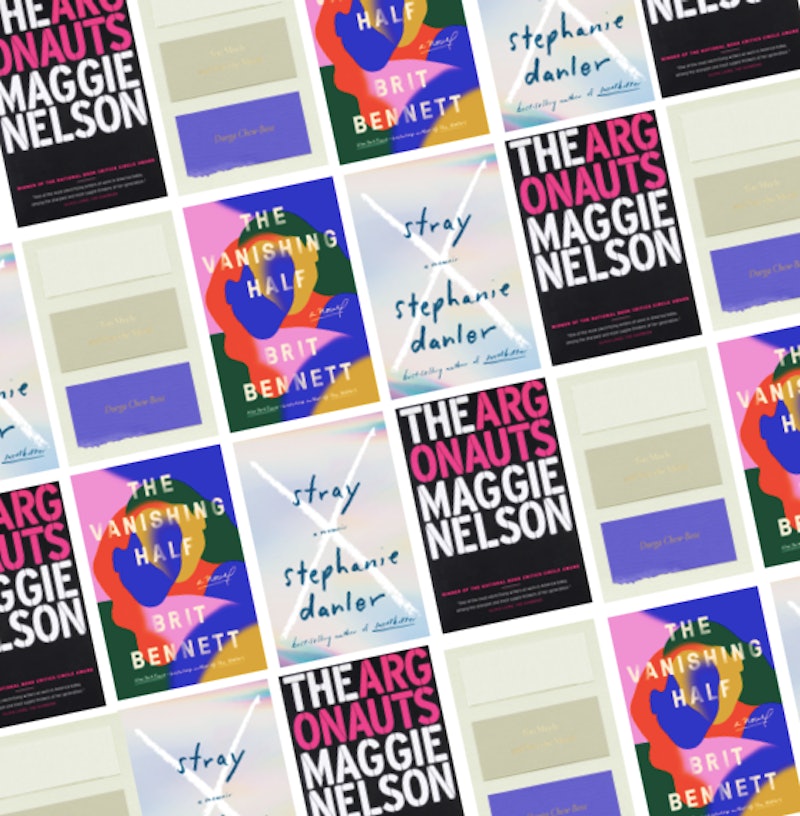 Sales for physical books have been impacted by the coronavirus pandemic, but that doesn't mean people aren't reading. Bustle's editors have continued to read through the shutdowns and have found solace in memoirs and fiction alike. We've got an eclectic mix of titles, ranging from classic nonfiction to fantasy adventure, in our list of the best books Bustle editors read this March, so there's sure to be something you'll love here.

Last month, Bustle Culture Editor Samantha Leach told you all about Kate Elizabeth Russell's My Dark Vanessa, one of the most anticipated book releases for March 2020. This month, Rule Breakers Editor Bri Kovan wants everyone to know about The Vanishing Half, Brit Bennett's long-awaited follow-up to her 2016 debut, The Mothers. The Vanishing Half isn't out until June 2, but it's available for pre-order today from your favorite retailer, and My Dark Vanessa is available anywhere books are sold.

After a great-for-books month like March, your April TBR shouldn't feel like it's missing something. On the off chance it does, however, you should draw a little bit of reading inspiration from this list of the best books Bustle editors read in March 2020. Whether you're looking for a juicy retrospective of 1980s glamour, or you want to read a great coming-of-age novel, we've got you covered here.

"'The good old days' is a phrase all too often used. But it is so tempting, isn't it? Especially in times like these... Sometimes though, a bout of nostalgia is exactly what is required. Enter Tina Brown's memoir, which shamefully sat sidelined on my bedside table for two years. As you'd expect, it harks back to 'glossier' times; when magazines had exorbitant budgets and editors divine powers. It chronicles Brown's 'flashy, fast, and scandalous' rise at Vanity Fair, bursting with sharp insights of major cultural moments and scurrilous gossip aplenty. Ultimately though, it serves as a good reminder that 'fame' and 'glory' aren't all they are cracked up to be. Even if you do get to hang out with Hollywood stars on the regular and be slighted by Jackie Kennedy." — Sam Rogers, Digital Director U.K.

The Argonauts by Maggie Nelson

"I read this book on a lazy day at home in early March, before COVID-19 would necessitate all days to be spent thus. Part memoir, part critical theory, Nelson pulls apart gender, identity, and motherhood, as well as her relationship with the artist Harry Dodge. The result is mind-bending and wonderful, but I will offer one note of caution: it’s not an easy read. Or relaxing. In 2016, Nelson won a MacArthur ‘Genius Grant’ and let’s just say, it shows." — Charlotte Owen, Editorial Director

Too Much and Not the Mood by Durga Chew-Bose

"I’ve been re-reading Durga Chew-Bose’s 2017-ish book of essays, Too Much and Not The Mood. She describes moving through in New York, in Montreal, in Mumbai in a way feels extremely relevant for the current socially distant moment, in that her rich inner perspective guides the reader through these moments. It’s helped me tap into my own memories of seeing friends, of summers’ days in Brooklyn, through the dusky sunlit lens of Chew-Bose’s luxurious prose." — Melanie Mignucci, Health & Wellness Editor

"I loved Sweetbitter, so when I heard that Stephanie Danler had written an explosive new memoir, I jumped at the chance to read it. In Stray, Danler lays her life bare. From her father’s drug abuse, to her mother’s neglect, to the all-consuming affair she has with a married man — nothing is off-limits in this book. The result is an incredibly raw look at a woman attempting to grapple with her demons, and right her wrongs."— Samantha Leach, Culture Editor

We Used to Be Friends by Amy Spalding

"Bustle recently teamed up with Euphoria actor Sydney Sweeney for a book club and she chose Amy Spalding's We Used To Be Friends. The book revolves around two best friends who seem inseparable and indestructible in the beginning of the novel, though you quickly learn through dual timelines that by the end of high school they barely even know each other. This is the kind of book I wish I had read when I was 18 and navigating friendships and major changes in my life. It would be easy for this book to be about the turbulence of high school love, but instead it is a, sometimes painful, look at what it's like to lose a best friend during such formative years of your life." — Allison Piwowarski, Deputy Entertainment Editor

The Raven Tower by Ann Leckie

"I just finished a re-read of The Raven Tower last month, and let me tell you: Leckie's first foray into fantasy is every bit as exciting as her 2013 sci-fi debut, Ancillary Justice. Something's rotten in the land of Iraden in this re-telling of Hamlet. Whenever the Instrument — the physical embodiment of the Raven — dies, the human Lease must die, too, in order to appease the god and make room for their heir. But when the Lease's presumptive heir, Mawat, returns home from the warfront, he discovers that, not only is his father missing, but his uncle has also taken over as Lease in his stead. As Mawat descends into madness, it's up to his best friend and confidant, a trans man named Eolo, to figure out what's gone wrong." — K.W. Colyard, Books Features Writer

The Vanishing Half by Brit Bennett (June 2)

"Brit Bennett's second novel, The Vanishing Half, is worth an early pre-order. (It hits 'shelves' this June.) It's a curvy, looping story of twin girls from Mallard, Louisiana, a mythical town where colorism reigns, and dark-skinned folk are held in contempt. One of the sisters passes into white society, cutting off contact entirely from her black family. The story primarily follows the sisters, but also the mother-daughter connections — a fitting complement to her debut book, 2017's The Mothers. I gobbled this up. And it's not just me: In a starred review, Kirkus calls it a 'rich, sharp story about the way identity is formed.'" — Bri Kovan, Rule Breakers Editor