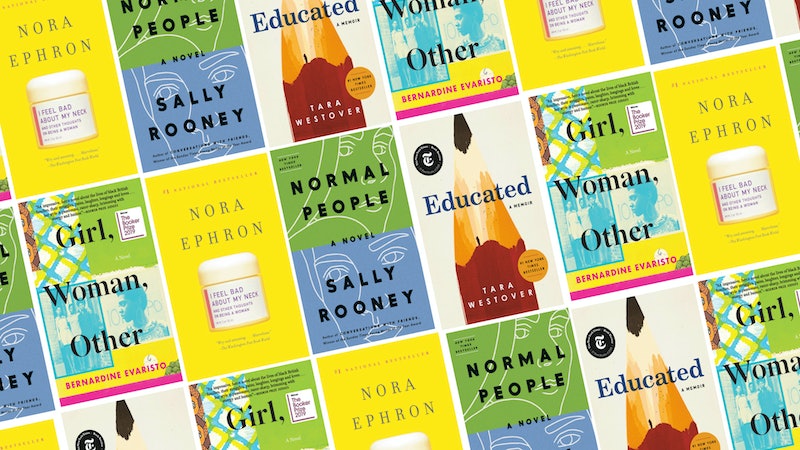 We're all dealing with the coronavirus pandemic and our subsequent quarantines as best we can, and it really shows in our roundup of the best books Bustle's editors read last month. From funny essays to seriously introspective memoirs, we've turned to a wide variety of genres to keep us entertained in these trying times. And we've collected the best of what we read last month for you to check out below.

Looking for something funny to take your mind off of the news? You're not alone. Sex & Relationships Editor Iman Hariri-kia loved Nora Ephron's I Feel Bad About My Neck, a humorous essay collection on women and aging. Whereas Executive Editor Christina Amoroso took the time last month to read Educated, Tara Westover's memoir of growing up off-the-grid in the western U.S. And Bustle UK Executive Editor Sam Rogers also explored the themes of loneliness and isolation. Rogers read Olivia Laing's The Lonely City, which uses the author's experiences of living by herself in New York City to explore the meaning of alone-ness in Western culture.

"In quarantine, I've been finally diving into Karl Ove Knausgaard's memoir quartet, pubbed in English in 2017. (Not My Struggle, which was his other memoir set that blew up the literary world in the mid-2010s.) The four books, named for the seasons, are structured as short observations of the things that make up life, interspersed with letters to Knausgaard's unborn, then newborn daughter. I devoured the first two, Autumn and Winter, over two Saturday afternoons. They're beautifully written reminders of what's waiting for us on the other side of this pandemic." — Melanie Mignucci, Health & Wellness Editor

I Feel Bad About My Neck: And Other Thoughts on Being a Woman by Nora Ephron

"As a long-time fan of Nora Ephron, I had been meaning to read this book of essays for, well, forever. She speaks so truthfully and eloquently about the gendered truths of being a woman — the maintenance, the upkeep, the expectations. She writes about seeing the world through the lens of a creator, about taking our life experiences and molding them into the stories, and vice versa. But what really touched me is the way she captures New York City — a vibrant character in her work, ever-evolving, but always containing multitudes of magic. Not hard to see why this was an instant classic." — Iman Hariri-kia, Sex & Relationships Editor

"I'm embarrassingly late to reading Tara Westover's memoir, Educated, which chronicles Westover's upbringing in the Idaho mountains by her Mormon family, whose survivalist proclivities include stockpiling food and eschewing Western medicine for home remedies. Westover doesn't receive a formal education but manages to school herself and get into college, eventually going on to receive a PhD from Cambridge. The book is at times raw and painful to read; she writes that she's regularly abused — physically and emotionally — by an older brother, and when she finally confronts her parents, they don't believe her, leading to a family schism. When Westover realizes only she has the agency to change her life, she's forced to answer the central question: whether, after experiencing radical change, you can ever go home — and if you even want to." — Christina Amoroso, Executive Editor

Girl, Woman, Other by Bernardine Evaristo

"One of my most frequent forms of COVID-19 sadness is that I miss being around other women. A good substitute, for now, is reading Girl, Woman, Other. The novel follows twelve members of a broad, intergenerational network in the UK, all of them extremely fun to hang out with: a lesbian playwright, her glamorous actor BFF, an uptight banker, her salty former schoolteacher. Each chapter is a perfectly gossipy stand-alone episode, but they also collectively build to an emotional climax about the way love gives shape to identity." — Kat Stoeffel, Features Director

The Lonely City: Adventures in the Art of Being Alone by Olivia Laing

"Olivia Laing’s The Lonely City is the kind of book that defies definition. Part memoir, part academic study, part philosophical text, it weaves around the very universal experience of loneliness through the lives and work of artists; namely Edward Hopper, Andy Warhol, Henry Darger, and David Wojnarowicz. Lockdown seemed the perfect time to pick it up, and though it did not fill me with hope about the kind of creativity such isolation might give way to, it did make loneliness feel less... alien. 'Loneliness is a special place,' writes Laing. 'I’m certain of it: adrift from the larger continent of human experience, but intrinsic to the very act of being alive.'" — Sam Rogers, Executive Editor Bustle UK

All Systems Red by Martha Wells

"I spent the last week of April reading Martha Wells' four Murderbot novellas to gear up for the release of the first full-length Murderbot novel, Network Effect, which comes out in early May. The stories all center on 'Murderbot': a rogue security 'droid programmed to protect humans and follow their commands, without consciousness or conscience. Something's gone wrong in this unit's head, however, because it now commands itself and feels emotion. Murderbot would really rather be marathon-watching bad TV — wouldn't we all? — but the death of one of its human crewmates prompts the android to investigate in All Systems Red, the first of the Murderbot novellas. If you're looking for a mystery that perfectly tempers grisly scenes with lighthearted humor, this is the series you need to read." — K.W. Colyard, Books Features Writer