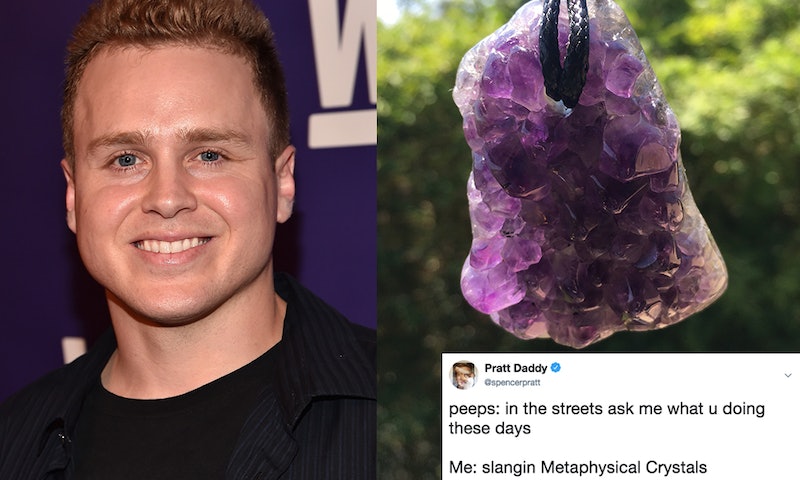 To make it through Mercury's retrograde unscathed, one might look toward instruments of healing for positive reinforcement. If you've been thinking about getting some crystals to protect yourself against this summer's Mercury retrograde — which is taking place between Jul. 26 to Aug. 19 in 2018 — well, you might be on to something. Crystal healing is an ancient, alternative medicine technique that involves particular crystals, aka fossilized resins, being strategically placed on the body to "move energy flow," according to Time. The age-old practice, which the ancient Egyptians are thought to have utilized, has become increasingly popular in the last few years as an embrace of the supernatural moves into the mainstream; and as far as I'm concerned, the rise in popularity is thanks to a certain Shorty Award-winning Snapchatter who has infused crystal therapy into his every day life — and consequently, his every day snaps. Enter: Spencer Pratt.

Yes, of course I'm talking about the inimitable Pratt, aka Pratty Daddy, aka, owner of Pratt Daddy Crystals, an online crystal emporium in which Pratt retails a growing collection of gemstones strung on cords and chains. Given that the bulk of many fans' understanding of crystals comes from an almost religious commitment to Pratt's Snapchat feed, it was a no-brainer to approach crystal enthusiast Pratt about what crystals are best for protection against Mercury retrograde, known for wreaking havoc on communication, technology, and travel in all its forms. While taking a break from filming his new MTV show, Spencer Pratt Will Heal You, Pratt spoke with Bustle about the use crystals for protection against the effects of Mercury's retrograde, as well as which he recommends.

"Everyone tunes into stones differently, so it's hard for me to prescribe them," Pratt says, first and foremost. While crystals do come with their own list of prescriptions, Pratt stresses the importance of discovering your personal connection to any crystal, as that can often trump any of its assigned traits. "I'm great on tequila, but some people get angry on it, you know?" he says.

So, what is a crystal newbie looking for some Mercury retrograde protection to do? Though Pratt does recommend a few starter stones (which are listed below), his initial advice is to, simply, go with your gut. "Go into a store, or scroll online, and see what you're drawn to," Pratt recommends. "If you like the look of something and think it should be in your life, it should be."

Commenting on the healing properties of crystals that are often criticized or referred to as a "pseudoscience," Pratt is unwavering in his belief. "When you get something new that you're excited about, you feel good energy — it's the same energy you get from a crystal... people over-think crystals," Pratt says, a concept that he finds disappointing. For him, it's not complicated; the pleasing aesthetic of the stone alone is evocative enough for Pratt to believe in. "Take some time to just look at a stone. They're all unique, they're all beautiful, and they all came from a dirty rock in the earth," Pratt says, a humble amazement in his voice.

If you're looking for a little bit of that prescriptive crystal guidance instead of relying on a gut feeling, Pratt does have some specific suggestions for stones that will bring the good vibes during Mercury retrograde this summer:

Black Tourmalized Quartz is Pratt's favorite crystal, and attributes this stone to protecting him from negative energy. "If someone's got bad vibes, they bounce off of this crystal and right back in their face," Pratt tells Bustle. While Pratt is happy to wear this (along with all of his other favorite crystals) every day, he says "if you don't want to wear it —which I think is ridiculous, because who wouldn't want to wear something absolutely beautiful that God created — you can just keep it in your work space or where you hang out the most."

"For me," Pratt explains, "Amethyst is like the chicken noodle soup of the crystals. It always makes me feel better — calm." He recommends wearing it every day as a necklace or bracelet, or even just keeping it in your pocket.

If you're looking for some mental cleansing, Pratt recommends keeping some Selenite around. Specifically, he tells Bustle it's best if you keep it stationary in the entryway of your home and in your bathroom, to help you feel both physically and mentally fresh.

Pratt relies on this stone for psychic protection. During a hard time, he tells Bustle, when he was having "having horrific nightmares every night," Moldavite was a huge help. Pratt credits the crystal with keeping the bad dreams away, and allowing him to sleep soundly. Wear it as a necklace or bracelet or keep it near your bed.

This stone should be kept in the bedroom, according to Pratt, as it helps to inspire romantic feelings while you're awake, and nice dreams while you're asleep.