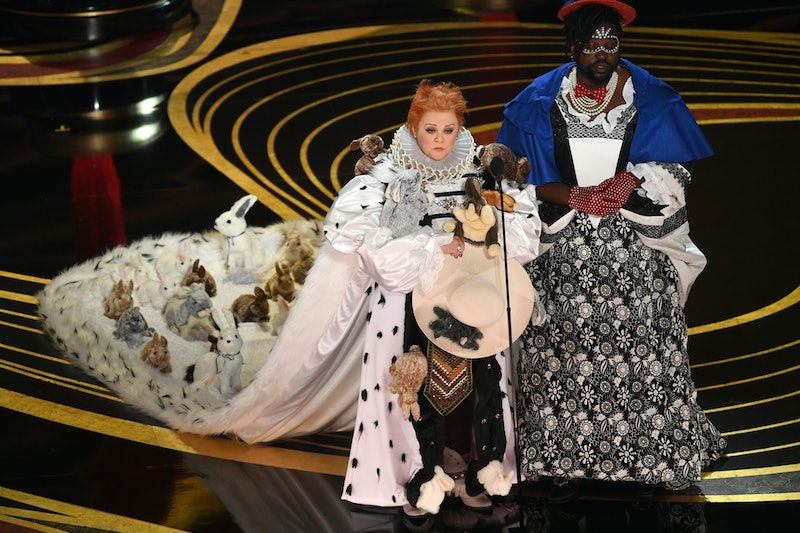 The Oscars don't have a host this year, that much is certain. With drama also surrounding what songs will be performed by whom and even which awards will be given out on air, how are we supposed to amuse ourselves during this stripped down ceremony? Social media, of course! Unsurprisingly, the 2019 Oscars memes and tweets capped off an awards season chock-full of them.

Memes pervaded the year in film itself, particularly when it came to A Star Is Born. Unfortunately, we're not only far from the shallow now, we're far from the dream of Bradley Cooper's directorial hit sweeping the Oscars like we all thought it would the first time we watched Lady Gaga sing her first note in the trailer.

However, not every awards show meme and tweet is about the nominated films. Every time two people present an award together and have an ounce of chemistry, Twitter immediately either 'ships them or demands that they host the Oscars next year — I don't make the rules!

Without a host as the through line of the ceremony to set the tone, and with such an emphasis on keeping the whole ceremony under three hours, the show played like a grab bag of random moments. But hey, at least that means that there were plenty of moments worth talking about. Here are some of the best memes and tweets of the night.

Honestly, there were some looks on the red carpet Sunday night.

If Jason Momoa's pink velvet Fendi scrunchie doesn't have its own Twitter account by the end of the night — what are we even doing?

This presenting duo decided to be all the costume nominations, and bless them for it.

Meanwhile, Keegan-Michael Key is coming in to present the next musical performance like:

That moment was made to be memed, and Twitter was on it. He somehow managed to upstage Bette Midler's performance of "The Place Where Lost Things Go" before it even began.

Bradley Cooper and Lady Gaga's performance of "Shallow" from A Star Is Born was one of the night's most talked-about moments as well. From the way they started in the audience to the way the cameras swirled around and caught their chemistry from behind them, and how close their faces got at the end, folks were buzzing.

If Spike Lee jumping into Samuel L. Jackson's arms as he went to present his first (yes, really) Academy Award isn't the purest thing, what is?

Speaking of the other Hollywood Lee...

Yes. Out of everything Stan Lee gave us, it's the cameos we'll miss most.

That's all folks! Maybe we didn't even need a host? We'll probably be debating that for the next year as we close this chapter in Oscar history and start to prepare for 2020 — fingers crossed there will be less drama, for once.

More like this
Paul Mescal’s Family Celebrated His Oscar Nomination In The Sweetest Way
By El Hunt
Twitter Is Overjoyed By Angela Bassett’s Record-Making Oscar Nomination
By Maxine Harrison
Twitter Is In Awe Of Taylor Swift’s “Lavender Haze” Music Video
By Jake Viswanath
Twitter Has Renamed Ekin-Su After *That* 'Dancing On Ice' Performance
By Sophie McEvoy
Get Even More From Bustle — Sign Up For The Newsletter
From hair trends to relationship advice, our daily newsletter has everything you need to sound like a person who’s on TikTok, even if you aren’t.