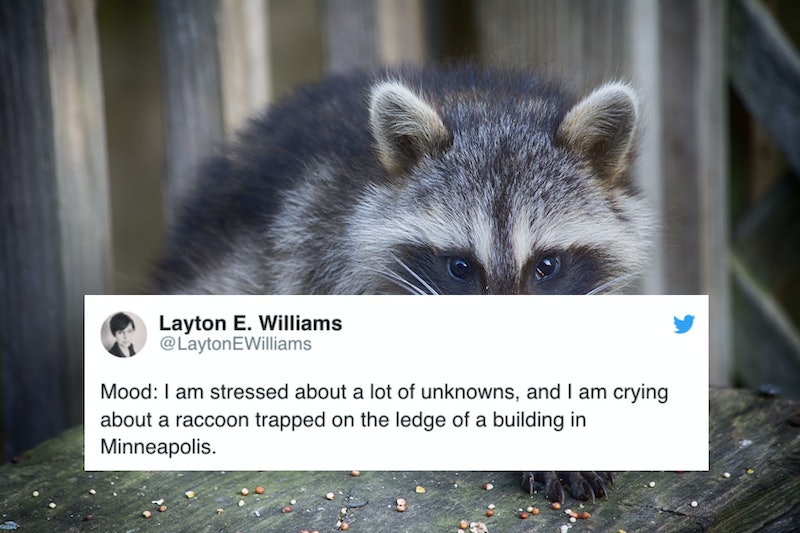 Raccoons don't conjure up happy thoughts for most of us. Personally, I think of the many times they hid in our community dumpster eating trash and gave me the surprise of a lifetime when I opened the lid. The raccoon who scaled the UBS Plaza changed the game for all rodents, though, and Twitter had a moment with it — it was so good, in fact, we've rounded up the 24 best MPR raccoon tweets.

In case you missed the action, here's what happened. Sometime in the not-too-distant past, a courageous raccoon thought to itself, "I want to go on an adventure." So, it decided to first climb up the side of the Town Square building, and then up the 20+ stories of the UBS Plaza in St. Paul, Minnesota. The problem was it got stuck, with no food or water. It was Monday of this week when Minnesota Public Radio employees first spotted the poor little thing, MPR News writes. Within hours, the people of St. Paul/the entire internet universe found themselves cheering for the hairy hero they didn't know they needed. Countless news and media outlets loyally followed the critter — who affectionately became known as the MPR raccoon — and his journey to safety.

Raccoon... or Spider-Man? You decide.

Here's the MPR raccoon looking mighty frightened and probably hungry too. That's the face of a raccoon that just wanted to go dumpster diving. Is that so much to ask?

Forget what you know about raccoons being creepy. You know nothing. Just look at that face.

I said look at it!

So, the question on everyone's mind is: how did it end? We can all breathe a sigh of relief, because as of Wednesday, MPR News reports the raccoon made it to the roof of the building and was safely captured. It is my hope that tonight, it feasts on rotten food and used paper towel.

The excitement might be over, but Twitter isn't quite finished with this yet, and neither am I. Nothing perfectly captures the chaos and hilarity of the last few days like these 24 tweets.