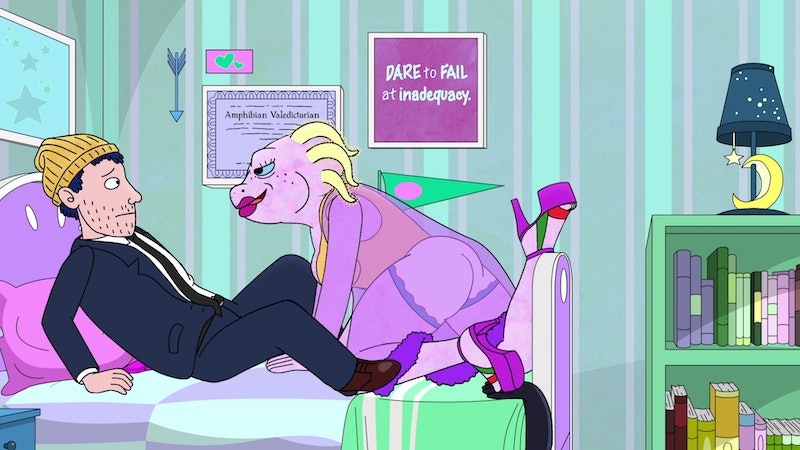 Anyone who's watched BoJack Horseman knows it's a pop culture sponge, with references to everything from Jessica Biel's acting career to Diane's NPR ringtones. And the pop culture references in BoJack Horseman Season 5 are no exception. There are television deep cuts and celebrity jabs galore — not to mention all the sight gags. Spoilers ahead!

As a primer, Season 5 follows BoJack (Will Arnett) as he stars in the What Time Is It Right Now? show, Philbert, where he plays the titular antihero. However, he realizes as the series goes on that he's terrifyingly similar to his character and consequently develops an opioid addiction. The actor also becomes entangled with his costar, Gina (Stephanie Beatriz), which goes south along with his mental state. Mr. Peanutbutter (Paul F. Tompkins) and Diane (Alison Brie), meanwhile, are dealing with their divorce and subsequent lives. Diane continues writing listicles for Girl Croosh, while her ex-husband begins a relationship with a young, enthusiastic pug named Pickles (Hong Chau).

And then there's Todd (Aaron Paul), who stumbles into a cushy office job at What Time Is It Right Now?, breaks up with his asexual girlfriend, Yolanda, and continues to fail up. Princess Caroline (Amy Sedaris) pursues adoption, and tries to juggle her personal and professional lives. But timely pop culture references are sprinkled throughout these storylines, giving some extra added flavor to already savory plot points. Here are the best ones from Season 5: