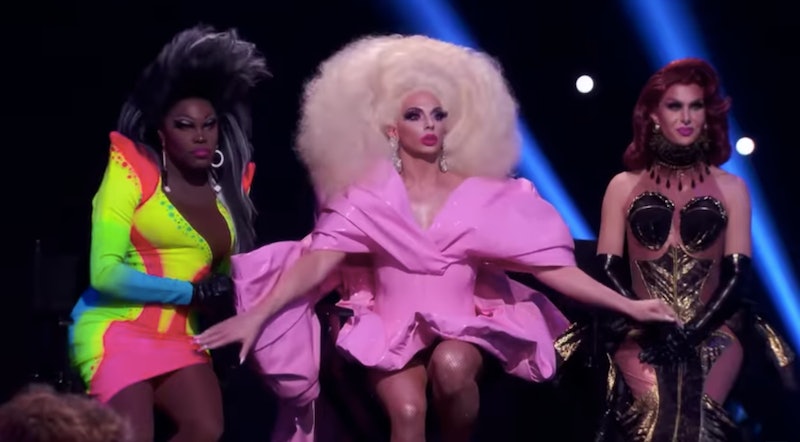 Combine The Masked Singer with RuPaul's Drag Race, and you get RuPaul's Secret Celebrity Drag Race, a new four-part series premiering April 23. The show features 12 mystery celebrities who, with the help of Drag Race winners Trixie Mattel, Alyssa Edwards, Monét X Change, and more, will transform into queens and sissy that walk for Ru and his fellow judges. Who's underneath the wigs? There's no official cast list yet, but fans have a few theories based on the show's trailer. Here are some of their best guesses.

Fans on Instagram are convinced that Olympic skier and American Horror Story actor Gus Kenworthy is the tattooed gentleman shown in the trailer. He appeared on All Stars Season 4 during Snatch Game and remains a devout fan of the show. He also clearly likes playing dress up, having transformed into all of the AHS: 1984 characters, so drag would be perfect for him.

Some fans also think they spotted actress and comedian Margaret Cho in the trailer. She appeared as a guest judge on Drag Race Season 3. "Slow it down, I think I saw Margaret Cho," one fan wrote in the YouTube comments. "I see that for her!" another responded. "Makes total sense she’d do the show."

In an interview with Hits Radio in October 2019, shorty after the announcement of a potential celebrity Drag Race, Fleur East asked Styles if he'd be up for joining. “Potentially, yeah," the singer replied. "Why not?”

Redditor @Unicorntamales thinks Vanessa Williams could be one of the contestants. "Vanessa Williams is an icon," the user wrote, pointing out that she was a guest judge on both Drag Race and All Stars.

Thanks to All Stars Season 4 winner Trinity the Tuck, Drag Race Season 10 guest judge and Younger star Tortorella has already undergone one drag makeover. Why not go all in?

Love is a a vocal fan of Drag Race and has appeared on Ru's talkshow, RuPaul, so she has the connections to make an appearance plausible.

Fans on Reddit think Robinson — one half of the podcast 2 Dope Queens — could be a contestant simply because she interviewed Alaska on her other podcast, Sooo Many White Guys, and spoke on a 2017 Drag Con panel.

Redditors really did some digging for this one. Milligan, aka Ted on Schitt's Creek, is a huge fan of Nina West, who just so happens to be one of the mentors on Secret Celebrity Drag Race.

There's really no reason why Porter shouldn't be on Secret Celebrity Drag Race. Just imagine what kind of looks he would turn out.

More like this
Twitter Is Saying The Same Thing About Jill Scott Winning 'I’m A Celeb'
By Sophie McEvoy
Meghan Markle Wishes Learning Royal Protocol Was Like 'The Princess Diaries'
By Jake Viswanath
What Does The Royal Family Think Of Netflix's 'Harry & Meghan' Documentary?
By Jake Viswanath
Prince Harry Explains Why He Feels Guilty For Meghan's Estrangement With Her Dad
By Jake Viswanath
Get Even More From Bustle — Sign Up For The Newsletter