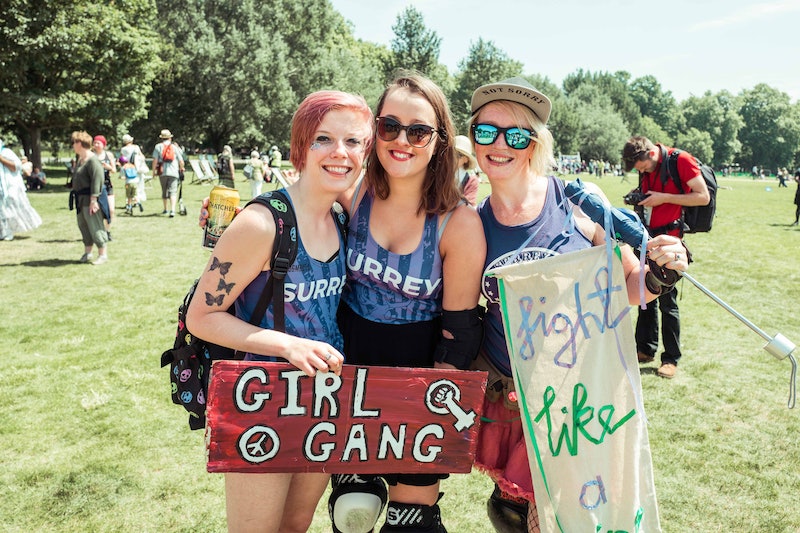 On Sunday June 10, in cities across the UK and Northern Ireland, thousands took to the streets wearing the green, white, and violet colours of the suffragettes in commemoration of 100 years passing since some women were granted the vote in 1918. A staggering 100,000 people were said have been in attendance altogether, as PROCESSIONS marches took place in London, Cardiff, Edinburgh, and Belfast. With this in mind, here are the best signs from the Processions 2018 march.

The march was seen not only as a celebration of the women that protested for their own rights and the rights of others in the past, but as a marker of what is still to be attained for women's rights. The aim of the 2018 march was "to come together to create a vast participatory artwork taking place simultaneously for one day. PROCESSIONS will be a living portrait of UK women in the 21st century." As photos of the day flooded social media, so did the incredible signs, from hand-painted placards to intricately stitched tapestries and linen banners.

Until 1918, British women were unable to vote or stand for public office. It was the Representation of the People Act, passed the same year in parliament, that changed everything. This was a landmark moment in women's suffrage and a change augmented the trajectory of women's rights. To commemorate 100 years since this milestone, Processions was commissioned by 14-18 NOW, the UK’s arts programme for the First World War centenary. Under the guidance of creative director Darrell Vydelingum, the idea was to create "a living portrait" of women, non-binary people, and children. Preparation was ongoing for months, will thousands working on unique banners to mark the historic day.

To mark each of the hundred years since 1918, 100 female and non-binary artists were commissioned to create 100 banners through working with communities across the UK. The results were phenomenal, a vast tapestry of creative work representing women of colour, prisoners, women with disabilities, older women, younger women, young mothers, women with mental health problems, sewing groups, knitting circles, craft clubs, youth projects, refugee women, women from both sides of the sectarian divide in Northern Ireland, women in hospitals and nursing homes, trans women, unemployed and working women, women from cities, from the highlands, the lowlands, the islands, and the women who don't have a voice.

Women travelled from all across the UK to join in a march with thousands of others. Many women from the Republic of Ireland crossed the border to join their sisters in the North, underpinning that after the recent passing of the abortion referendum in the south, the North was next and would not be left behind in the agenda for women's rights.

In celebration of the women and girls who had marched before, many of the banners that featured in Processions 2018 were handmade tapestries, commemorating the handmade banners and signs that are associated with the suffragettes. Textile art has always had an incredibly important place in the fight for women's rights, as by communicating through the mediums available and familiar to them women were able to make their activism more widely known. During the second wave of feminism in the 1970s, the so-called "domestic arts" were reclaimed by women to create subversive political messages using the skills men had for so long derided as inconsequential.

With such an incredible turn out across Belfast, Cardiff, Edinburgh, and London, Processions 2018 was a resounding success in commemorating the incredible work that the original suffragettes did, but also every woman, non-binary person, and girl that came after and benefitted from their activism and worked to further it. The march made essential points that though we have come a long way, there are still women who need us to keep protesting.