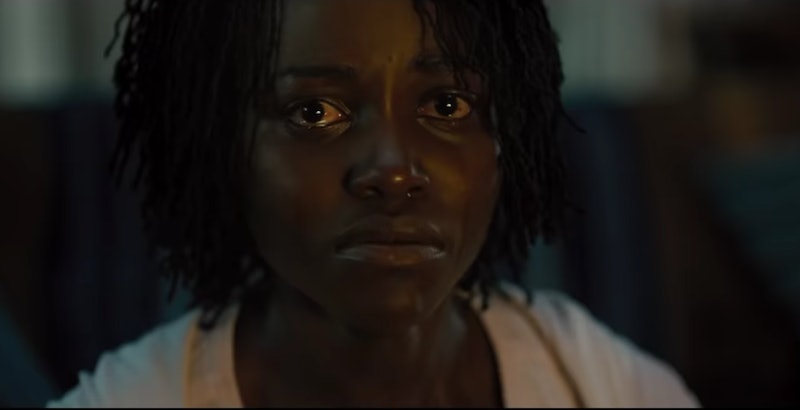 "Watch yourself." That's the biggest takeaway and possibly the best piece of advice from the first Us movie trailer, which debuted on Christmas, bringing some very real fear instead of cheer. Jordan Peele's new movie also helped fill the Twitterverse with a whole lot of Us movie memes that made it clear we're our own worst enemies. Especially if you're Kermit the Frog, Beyoncé, or Annie James and Hallie Parker.

In the Us trailer, Lupita Nyong'o is taking on well, another Lupita Nyong'o carrying a creepy set of gold scissors. Throughout the teaser, N'yongo and her family, which includes her Black Panther co-star Winston Duke (a.k.a. M'Baku) as her husband, are confronted with The Tethered, enemies that look just like them. Yeah, things are gonna get deep in this horror flick.

In an interview with Fandango, Peele explained that "this movie, unlike Get Out, is not about race. Instead it’s about something I feel has become an undeniable truth," he said, "that is the simple fact that we are our own worst enemies.”

You know, just some light existential dread coming to theaters this spring. But, before Us hits theaters on March 15, 2019, it's worth getting in a good laugh with these memes that make light of creepy doppelgängers because soon all they'll give you is nightmares.