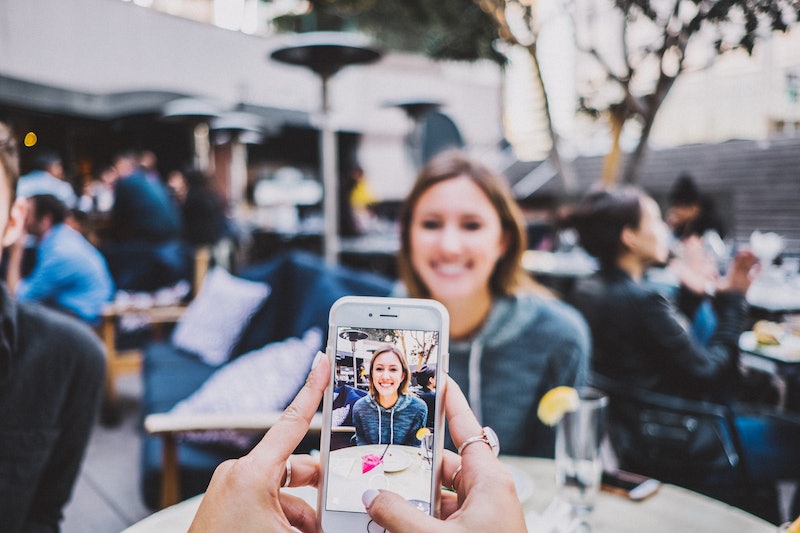 The internet has endless amounts of advice when it comes to learning how to pick the perfect profile picture — but new research may offer the best insight on the contentious subject yet. Researchers out of the University of New South Wales in Sydney, Australia found that the best profile photos are selected by strangers. While I'm not suggesting your Facebook or Bumble account should be entrusted to the first random person you meet, the study found that the images people had "selected for themselves made a less favorable impression than images selected by others." So, when looking for the most flattering profile pic, it could be handy to get a second opinion from someone outside your social circle.

How we represent ourselves on the internet often affects us IRL, and it all starts with the all-important photo. Whether we are applying for a job, searching for a date, or reconnecting with old friends online, our profile photo makes the first impression. While we take care to select what we think is the most attractive or confident photo of ourselves, the study published in the journal Cognitive Research: Principles and Implications proposes that we might not be the best judge of our own portraits.

"Our findings suggest that people make poor choices when selecting flattering images of themselves for online profile pictures, which affects other people's perception of them," lead author of the study, Dr. David White, said in a press release. "Previous work has shown that people make inferences about an individual's character and personality within a split second of seeing a photograph of their face, so our results have clear practical implications; if you want to put your best face forward, it makes sense to ask someone else to choose your picture."

To test people's ability to pick their own profile pictures, 102 students were asked to look at 12 images of their face and select two: One that they would most likely use as a profile picture, and one they were least likely to use. The subjects selected images for three very different online contexts: Dating, social networking, and professional networking sites. Participants were then asked to repeat the process for the photos of someone they didn't know, and researchers noted that when faced with the anonymous photos they were easily able to "select images that highlighted positive personality traits" matching the context of the social network they were intended for. After the selections were complete, online volunteers rated the person in the photos based on traits such as attractiveness, competence, trustworthiness, and confidence.

The good news is that while the images that the strangers selected ranked higher, we are not entirely helpless when it comes to picking our own profile photos. Participants were still capable of picking images of themselves that fit the context of the networks and made a positive impression — just not quite as positive as those picked by others, as an infographic released with the study shows.

Why strangers are better at getting to the heart of what makes a flattering profile photo is still up for debate. "Future research needs to investigate the mechanisms that underlie the choices people make when selecting profile pictures to find out why people seem to have a limited ability to select the most flattering images of themselves," adds Dr. White. Perhaps since strangers don't have the same hang ups and preconceived notions about our looks, they are able to judge the photos literally "at face value." They don't know what we think is our best side, or most attractive pose, they just know what appeals most to them.

So next time you're selecting a new photo, try to look at your options from an outsiders perspective — or, you know, asking someone in line at Starbucks could work too!