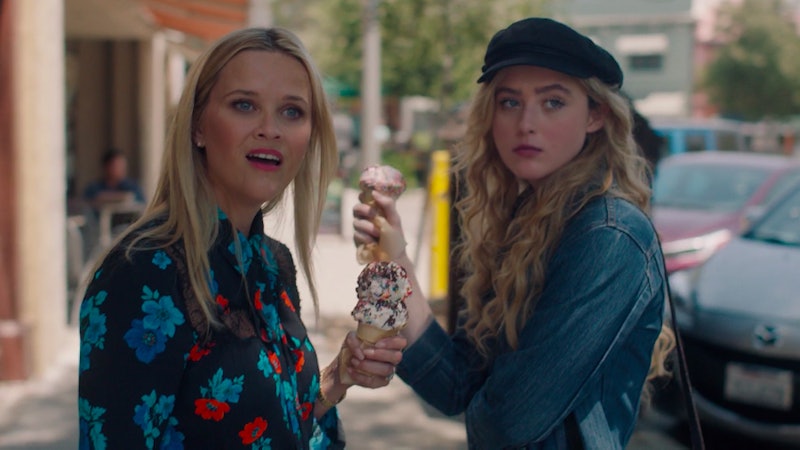 When it comes to that viral Big Little Lies scene in which Reese Witherspoon throws an ice cream cone at Meryl Streep, fans will always have the memes. And that might be better, according to HBO president Casey Bloys, who went on the record to say the BLL ice cream toss might not be as epic as fans hoped. In fact, he says that might be why the Season 2 scene ultimately got cut.

In an interview with TVLine, Bloys talked about scrapping the moment Madeline throws the ice cream, much to Twitter's dismay. While Bloys said that he “was not involved in the creative decision to include it or not,” he did offer a reason as to why it was left on the cutting room floor.

“My guess," he said, "is it made for a funnier meme on social media than [an actual scene]." While that might seem blasphemous to some fans who really, really wanted to see Witherspoon's Madeline nail Mary Louise (Streep) with two-scoops to the back. And she did really hit her, Witherspoon confirmed as much on Twitter after the paparazzi photos of the scene hit the internet. Bloys theory on why the scene was cut sounds plausible.

“Obviously, Reese Witherspoon holding an ice cream cone aimed at Meryl Streep’s head is pretty hard to beat," he said. "But a behind-the-scenes shot is much different than a scene within the narrative context of the show.”

It's true that the on-set photos are like a Renaissance painting. Witherspoon's arm is so perfectly positioned to hurl that line drive at the unsuspecting Streep. It's hard to look away, which is why Twitter had a field day with it.

No to mention, Witherspoon hyped up the scene in an August interview with Vanity Fair. “I nailed her, and I felt really good about it,” she told the magazine. “Once you watch the show, you’ll understand why I did it. You’ll be happy, too." She teased that sports fans would be happy with her form, too. "I did the wind-up, and I made sure to have proper mechanics and really focused on my target," she said. "And I got her. My softball skills paid off.”

All of this is why so many on the internet were disappointed not to see this tableau in actual motion when Episode 5 aired. In the end, Madeline and Mary Louise's showdown at Mother Moo Creamery in Sierra Madre, CA, the real ice cream shop where Big Little Lies filmed was cut short. (Fill-in your favorite Mary Louise short insult here.) Instead of flinging her dairy treat, Madeline just gave her a hard stare.

It's previously been reported that the full ice cream scene will end up on the Season 2 DVD, something Bloys would neither confirm or deny when talking to TVLine. Hopefully, fans will find out where they can see the #icecreamcut soon and maybe some news on whether Big Little Lies Season 3 is actually happening. Otherwise, Bloys might want to watch out for flying cones.