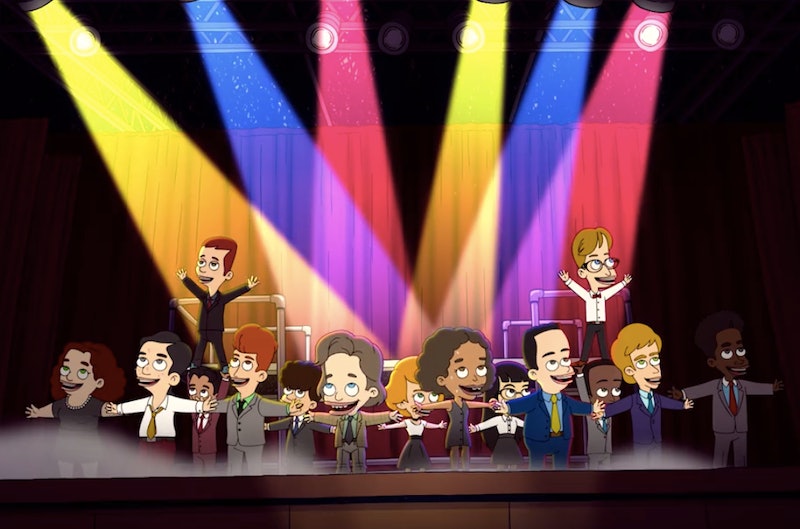 Spoilers ahead for Big Mouth Season 3, Episode 9. Throughout three seasons of Big Mouth, the animated comedy has skewered various aspects of pop culture, and in Season 3, they tackle Disclosure — a 1994 erotic thriller, which was adapted from a Michael Crichton novel. The movie (which is streaming on HBO) asks the question: what if a white man were sexually abused by a woman, and no one believed him? It's clearly inappropriate for middle schoolers to be performing a musical with such an adult topic — Big Mouth is obviously in on the joke, with the students singing, "You're gonna be dazzled, appalled and perplexed / Our parents will squirm watching us simulate sex!" However, Big Mouth's Disclosure musical sheds light on just how backwards this film was — especially in retrospect.

The movie itself follows Meredith Johnson (Demi Moore) and Tom Sanders (Michael Douglas), who are boss and employee at a tech company, respectively. Not only do they share a sexual history, but Meredith abuses her newfound position of power by propositioning him one night after work.

Tom is a family man now (something that he mentions numerous times), so he tries to refuse her advances. However, she succeeds in giving him a blow job before Tom has a change of heart and runs out of her office.

Meredith sees this as an affront and retaliates by accusing him of sexual harassment (though it was more like sexual assault, since she claims that Tom forced her to give him a blow job). She opens a lawsuit against him, his coworkers and wife find out, and all hell breaks loose. Tom is furious that everyone believes Meredith's testimony and not his, becoming something of a men's rights activist as the film continues. "Why don't I just admit it?" he asks his wife, sardonically. "Why don't I be that guy — that evil, white male you're all complaining about?"

This is clearly not Big Mouth's view of the complicated issue. While most of the kids in the musical are too young to understand the complicated power dynamics at play, the episode's sole voice of reason comes from Jessi (Jessi Klein), a burgeoning feminist, who comments after reading the script, "This play discredits women who have the courage to speak out! It's a misogynistic fantasy!"

And that's not even including the racist casting: Gina's (Gina Rodriguez) character is named "Señorita Cleaning Lady," while Ali (Ali Wong) is assigned "Hot Asian with Asian Boobs" (which likely refers to the tech company's nameless cleaning lady and Tom's assistant, Cindy Chang, from the film). Nick and Missy, meanwhile, are cast in the lead roles and nervously practice their big scene together (the blowjob itself is illustrated through an interpretive dance, which involves sentient wine bottles). Perhaps the only good thing to come out of Disclosure the Movie: The Musical is Missy finally getting her own hormone monstress, who encourages the middle schooler to own her sexuality through her onstage persona.

But just as Disclosure took a sensitive topic and came away with all the wrong ideas, the students' teacher, Mr. Lizer, relates to its subject matter a little too closely. "Disclosure the Musical is an exploration of the dangerous times that we men are now forced to navigate," he tells the middle schoolers, sitting backwards on a chair. "This play dares to harass the very notion of sexual harassment and say, 'Uh, yeah, me too!'"

Mr. Lizer, it should be noted, is an amalgam of both Demi Moore and Michael Douglas's characters, embodying both the kind of white male who bristles against the #MeToo movement while simultaneously being a predator himself. The teacher abuses his position to make Lola give him foot and back rubs, which she's too naive to understand is inappropriate. While their relationship never goes further than massages (which is how Tom and Meredith's tryst began), it's so completely abhorrent that Andrew farts nervously when he spots them from backstage.

It's also evident that it's not the first time Mr. Lizer's done this before. When he's confronted on opening night, he guesses who his accuser was, asking, "Mila? Devin? That hot eighth grader with the blonde leg hair? I was complimenting her!"

But while Disclosure is laughably dated in 2019, the plot is also tragically relevant. By making Meredith a villain who spouts false accusations, it sets a dangerous precedent. However, that's not to say that men can't be victims — on the contrary, one out of every six men has experienced sexual abuse, per the organization 1in6, which should not to be trivialized. But neither should women's testimonies, when so many are met with questions, doubt, or flat-out disbelief.

"It's very hard, because we have a cultural predisposition to perpetuate a lot of rape myths. And one of those is that women excessively exaggerate as victims, that they make things up, that there are misinterpretations," Soraya Chemaly of the Women's Media Center Speech Project told PBS News Hour. "And so, as opposed to having the woman's testimony be considered valid, or even giving her the benefit of the doubt of the innocence of not being a liar, the culture in general attributes lying to women who come forward."

There's also a growing faction of people who believe that the #MeToo movement has gone too far — in a poll conducted by NPR/Ipsos, 40 percent of respondents believed as much. The New York Post editorial board also came to the same conclusion in a 2018 opinion piece. Which is why now, more than ever, it's important to believe women and not demonize them — even in fictional stories. Fortunately, this is something that Big Mouth understands, which is more than we can say about Disclosure.

More like this
What’s New On Netflix: 'Never Have I Ever' & 'Indian Matchmaking' Return
By Arya Roshanian
What’s New On Netflix: 'Bridget Jones’s Diary' & 'Monster-in-Law'
By Arya Roshanian
Here’s Everything Coming To & Leaving Netflix In August
By Jake Viswanath
Everything To Know About The HBO Max & Discovery+ Streaming Service Merger
By Brad Witter
Get Even More From Bustle — Sign Up For The Newsletter