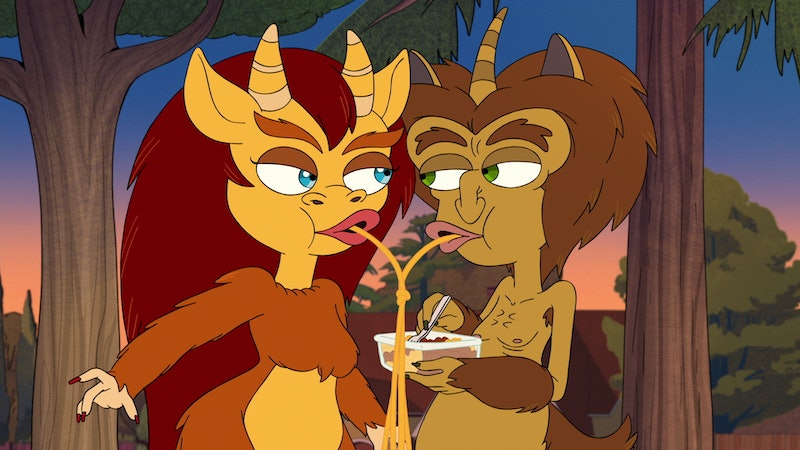 Valentine's Day as an adult is basically all about celebrating your loved ones, eating chocolate for every single meal, and marathoning all of your favorite romantic comedies over and over — but, when you're in middle school, it's basically a minefield of awkward interactions and hidden crushes. This year, Netflix is combining both with the Big Mouth Valentine's Day special episode. Or, as Maya Rudolph's Hormone Monstress has renamed it, a Valentime's Day episode. ("It's the time of the Valen," she explains.) Either way, it's the perfect way to celebrate all of those unbearably uncomfortable, endlessly angsty moments of adolescence

In the trailer for the upcoming special episode — titled Big Mouth: My Fuzzy Valentine — the students of Bridgeton Middle School are busy trying to balance the expectations of Valentine's Day with their own inherent awkwardness. "I always blow it on Valentine's Day, because I try to hard," Andrew (John Mulaney) explains to his Hormone Monster (Nick Kroll) in the trailer.

"But this year, I'm flipping the script, Daddy-O," he adds, unveiling his new attitude and Kangol hat. Unfortunately, it doesn't seem as if "Chill Andrew" will manage to win over his longtime crush, Missy (Jenny Slate), as he spots her hanging out with other classmates on the big day.

The special also looks like it's going to take aim at some classic romantic comedy tropes, with Matthew (Andrew Rannells) and Jessi (Jessi Klein) showing off some moves in an elaborate dance number and Nick (Nick Kroll) recreating the famous diner scene from When Harry Met Sally during lunch with his new Hormone Monstress. "It's a little overdone, don't you think?" she deadpans, as a nod to both Nick's acting and the iconic film reference.

Of course, this being Big Mouth, fans can expect plenty of gross-out humor and wildly-inappropriate antics — like Coach Steve (Nick Kroll) building himself a new girlfriend out of candy that he cheerfully dubs "Reese Werther-spoons". As always, though, the show's dedication to highlighting all of the awkward, disgusting moments of puberty is a part of its mission to help all of its viewers to feel a little less alone.

In a recent interview with Bustle, Big Mouth's co-creator Jennifer Flackett explained that the show's goal is "making everybody feel less alone and really laughing about it, too." Recalling the first time that the program's female animators saw a scene where Jessi reacts to her first period, Flackett explained, "There was this sound that kind of came up through the group. [Co-creator] Andrew Goldberg said to me, 'I've never heard a sound like that before.'"

Describing it as "this little emotional laughter," Flackett continued, "It was all these women being like, 'I recognize that. This thing that I've never seen represented before is being shown.'"

In September 2017, co-creator and star Kroll echoed those sentiments, telling Bustle that puberty is often "something that people are afraid to talk about and address, and because of that kids feels unbelievably alone going through it." As a result, Big Mouth uses all of their Hormone Monsters, absurd dream sequences, and grossly honest jokes to "make people not feel alone going through [puberty] and having these feelings."

Thankfully, Big Mouth will continue its quest to help everyone navigate those high stakes — and to laugh at all of the awkward moments and embarrassing feelings that come with it — when it returns to Netflix with Season 3. In the meantime, though, we can all celebrate the best and worst parts of Valentine's Day on February 8, when Big Mouth: My Furry Valentine arrives on the streaming service. Make sure to celebrate like the Hormone Monstress by watching it in a luxurious bubble bath.