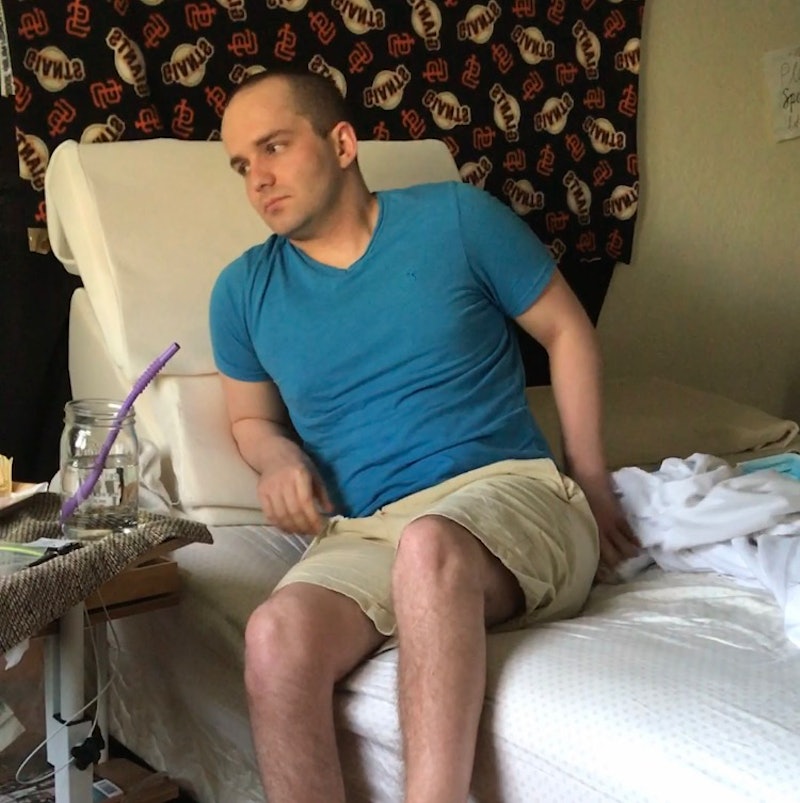 When Donald Trump released his first federal budget last month, it almost instantly earned the nickname "skinny budget." The budget for fiscal year 2018 puts a number of federally-funded departments and programs on the chopping block. One of the dramatic cuts is to the Department of Health and Human Services.

Specifically, Health and Human Services is looking at a decrease in funding of more than $15 billion, as the Washington Post reported. Trump's plan involves slashing around $5.8 billion from the department's National Institutes of Health (NIH), an agency that serves as the predominant source of fundamental medical research for our nation. But the president has followed his budget proposal with an even more expeditious chop, asking for an immediate cut of $1.2 billion from the NIH.

Many medical treatments are first conceived using research funded by the NIH and the agency oversees research for a bevy of diseases, including Parkinson's and Alzheimer's. It also serves a critical role researching lesser-known conditions like myalgic encephalomyelitis (chronic fatigue syndrome or ME/CFS) — the disease from which I suffer.

For years, decades really, patients with myalgic encephalomyelitis have advocated for more government research funding, and for good reason. In 2015, for example, the disease only received around $5 million in research funding. Among the categories of disorders that the NIH allocated more funding to than myalgic encephalomyelitis were food allergies and headaches. These conditions received $39 million and $24 million, respectively, in 2015.

Even though those disorders are more common, they are not always as severe and seeing them receive more funds than myalgic encephalomyelitis seems incredibly unfair to me. Also, my disease is more common that many realize; it affects at least 1 million Americans, according to the Centers for Disease Control and Prevention, and millions more around the world.

Caregivers fed me liquified meals and gave me sponge baths as I remained imprisoned in my ailing body wondering when, or if, more research funding would come from the government so a cure or at least a biomarker could be found to create a diagnostic test.

I have had myalgic encephalomyelitis for six years, and I'm now among the most severe cases. When I first got sick in 2010 I was able to function relatively well with the disease, maintaining a part-time job while finishing college. But two years ago I came down with a bad case of the flu, which compounded with my existing condition, left me unable to speak, sit up in bed, or eat solid food.

The next 18 months had me in a nearly catatonic state, closed off from much of the outside world. Caregivers fed me liquified meals and gave me sponge baths as I remained imprisoned in my ailing body wondering when, or if, more research funding would come from the government so a cure or at least a biomarker could be found to create a diagnostic test.

Then, halfway through last year my health started to improve as I tried new experimental treatments. I have remained on these treatments for over a year now and my health continues to improve. I believe these treatments can help other people, but their efficacy needs to be reinforced by research.

Even with minimal government-funded research, there have been a number of promising studies done recently that may lead to bigger breakthroughs.

For example, researchers are finding that myalgic encephalomyelitis affects the body's metabolic functions. Specifically, cells in these patients don't use as much sugar to make energy compared to healthy people. Instead, the cells burn more protein and fats for energy, which can have a number of consequences including pain, inflammation, and what researchers believe is a sort of starvation or hibernation effect on the body. Several studies have supported this idea, including those done at the University of California at San Diego as well as at research facilities in Norway and Australia, among other countries.

In fact, now the question is not how much funding the government will provide for combating my disease, but if there will be any funding at all.

Dr. Ronald Davis, a geneticist at Stanford University whose son has a severe case of myalgic encephalomyelitis and relies on a feeding tube to stay alive, recently announced his team has developed a device to test the effectiveness of drugs on people with the disease.

And all of this has been done without substantial government-funded research, which poses the question: What could be accomplished if the disease had more research funding?

Late in 2016, Science reported that the NIH was aiming to increase funding for research for myalgic encephalomyelitis to $15 million. I reached out to the NIH for the latest sense of what they aimed to allocate for myalgic encephalomyelitis funding. In an email, the agency responded with an estimate that was a little lower — $12 million — but even that may be unlikely with Trump's budget proposal. Specifically, the NIH said:

For FY2017, Vicky Whittemore, NIH’s lead on ME/CFS, is estimating that total FY2017 funding could reach $12 million, but is dependent on the number of meritorious proposals that are received and the overall budget situation. The actual funding will not be known until later this year or early next year, after the NIH budget office does its end of year accounting.

Thus, even that $12 million — still much less than what was allocated to food allergies and headaches — is in jeopardy. In fact, now the question is not how much funding the government will provide for combating my disease, but if there will be any funding at all.

Under Trump, federal research funding may be taking a misguided course that will affect millions of sick and disabled Americans. As a country, we need the NIH, and we need it to have a budget that allows for diseases like mine to have adequate research so people can get better. Cutting the budget for health-related agencies accomplishes none of this and will only make us sicker as a nation.

For patients like me, who have spent years urging the government to help, it signifies the wrong kind of action. We need to move toward answers, not less funding and more wasted time.

More like this
The 9 Best Exercises For Piriformis Syndrome Relief
By Carolyn Steber
All The Benefits You Get From Sitting In A Sauna
By Carolyn Steber
I Tried The Ice Barrel's Cold Therapy Tool & Now I Like Ice Baths
By Allie Flinn
Got Brain Fog? Here Are The Best Supplements For Memory & Cognition
By Carolyn Steber
Get Even More From Bustle — Sign Up For The Newsletter