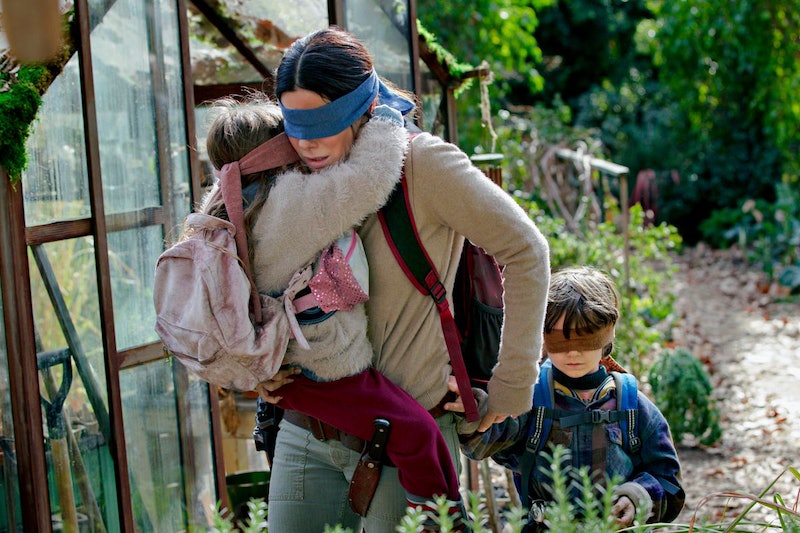 Even if you spent the rest of your days walking around blindfolded, you probably still wouldn't be able to avoid the onslaught of Bird Box references and memes. It seems like pretty much everyone in the entire world has now seen the Netflix film starring Sandra Bullock — or, "the chick from Birdbox," as she's now disturbingly known to younger viewers. Your view on it might now radically change though, as the gloomy film has potential to be even more sinister than it already is. It's just been unveiled that Bird Box's book ending is even darker than the one chosen for Netflix.

As the film's director, Susanne Bier, told The Sun on Wednesday Jan. 2, her intention for the Netflix film — the one that the streaming site reports 45 million viewers have seen — was for it to have "a hopeful ending." The director, who's mostly known for her rom-coms, including the Piers Brosnan starring Love Is All You Need, told the publication, "In a way, pretty much everything I’ve done has had some sort of a hopeful ending." She added: "I’m not particularly interested for the audience to leave, from the cinema or their own screen, with a kind of completely bleak point of view. That’s not really what I believe in."

To give you a refresher — and this is of course a huge spoiler — Bier's so-called "hopeful" ending sees Malorie aka Bullock arriving at a sanctuary with her kids, wherein they find a community of blind refugees who've manage to stave off a life of brutality and sheer survival. Before the screen fades to black, you see Malorie's kids playing with the blind kids of the sanctuary — finally getting to enjoy a life that isn't filled with constant terror.

However, if you didn't already know, the Netflix film is actually based off an original debut novel by Josh Malerman. Is it more terrifying than the film? Yep, and probably by quite a margin. In his review, author of the sci-fi series Silo, Hugh Howey said he read the novel "in one sitting," and declared that it should be read "through the cracks between one's fingers." In fact, the novel's so scary that Bier had to tweak the its seriously bleak ending.

As The Sun reports, the difference in the novel's original ending comes with the bleak realisation that the dwellers in the sanctuary had deliberately blinded themselves in order to survive. This extra detail isn't evident in Bier's adaptation, so that the hope can go on trumping the tragedy. And that's exactly what Malerman's ending reads like — blinding yourself in order to survive? — that basically is like a Greek Tragedy.

"I would not have wanted to do an apocalyptic movie that didn’t have a hopeful ending," Bier told The Sun. And I'm pretty glad. Imagine poor Bullock going through all of that — and being reduced to "the lass from Bird Box" — only for her to be faced with that inconsolable bleakness.