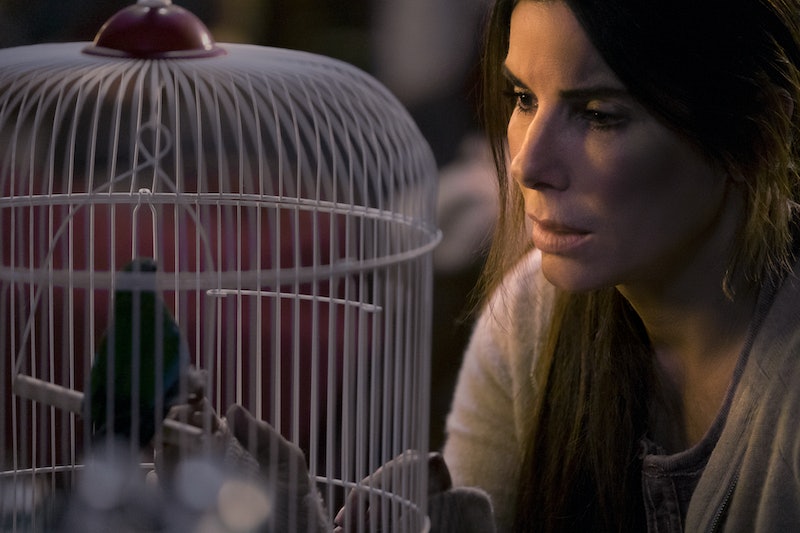 Warning: Spoilers ahead! The Netflix horror film Bird Box opens with Sandra Bullock's character Malorie giving harsh directives to two adorable moppets, telling them if they take their blindfolds off, they will die, if they disobey her, they will die, and if they hear anything, they have to tell her. She's preparing them for a long and dangerous journey downriver, hoping to find some sort of salvation in a world decimated by an invisible force. I'd say unseen force, but that's exactly the danger — one glimpse infects whoever sees the creatures with a vision so horrifying or upsetting they become instantly suicidal. It's a bleak premise, but the Bird Box ending offers bittersweet hope to those remaining in this new world.

A small household of survivors, including a pregnant Malorie, figure out that seeing is the issue, with an attempt by their host Greg (played by BD Wong) to view them through secondary means turning out equally disastrous as looking at them directly. You absolutely cannot look without endangering your life. Windows are taped up and blacked out, and the movie repeatedly cuts to Malorie's POV through her blindfold, as she fumbles around desperately without sight. You might be thinking the same thing I did: What about people who've lived comfortably without sight their whole lives, people for whom it's not a debilitating danger but just... being alive?

The sanctuary Malorie's boating downriver to get to turns out to be located in a school for the blind. Their courtyard is open air, the roof covered with trellised greens that block vision but not filtered light. It's supposed to represent a new Eden, a safe space for humanity to exist, but the first thought I had was, I hope they have a plan in place come winter for the survivors with sight, because that greenery will be gone.

Also to consider is the odd choice of lumping survivors into three groups: those with sight who manage to avoid looking, like Malorie; those without sight, who remain unaffected; and those with sight who saw and lived. Malorie and her partner Tom (Trevante Rhodes) have a few run-ins with the latter; everyone who saw and didn't immediately kill themselves seems to turn high evangelical for the thing, spreading the horrifying gospel of seeing a new and more beautiful world, whether people want to or not.

The movie makes it clear that people are seeing something unbearable to them; the woman who rescues Malorie asks her mom to come back before walking into a burning car. The audience later learns that the woman's mother's been dead for decades. So that means that those who were able to see and survive must have experienced the worst thing possible, and then lived through it. Shouldn't that be a positive? Tom, an Iraq war veteran, mentions seeing a father walk his kids to school amid bombings, and that he takes comfort in the idea that life goes on within horrifying surroundings. Yet when he saw, he also succumbs to suicide. By the movie's strange logic, facing your worst inner demons doesn't strengthen you, but turns you into one yourself, determined to force others to confront the same.

Malorie's safe arrival at the sanctuary ensures she and her children will remain blissfully ignorant of whatever horrifying vision awaited them, their sight limited to the interior of the sanctuary, amid people for whom something considered a disability turned out to be an advantage. Both this film and A Quiet Place, which also featured a disability presented as survival advantage, have a weird ableist bent — not overt but implied by the end, where those with sight gratefully remove their blindfolds amid the blind.

The film ends on a note of hope based on sight, with Malorie spotting someone from her old life. But the creatures are ever outside, leaving all the survivors in a bird box of their own making.