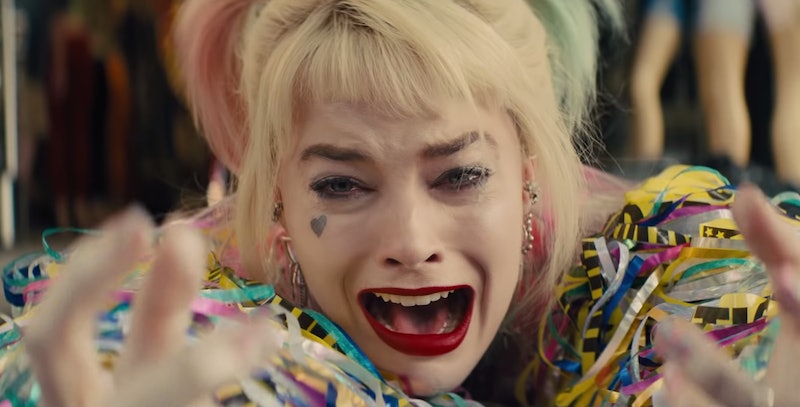 The new Birds of Prey trailer has finally been released, and Harley Quinn and her new team of unlikely anti-heroes are here to take on new challenges in the crime-ridden Gotham City. The movie is might be a spinoff of Suicide Squad, but it's leaving plenty of the past behind. In fact, the Birds Of Prey trailer confirms Harley Quinn and the Joker broke up. But before shippers get sad, it's probably for the best.

The trailer, which premiered Oct. 1, showed a new Harley Quinn (played by Margot Robbie), one who has left her red and blue hot pants and "Daddy's Lil Monster" shirt behind. That look is gone, a casualty of her breakup, along with her red and blue dyed pigtails, which she cuts off in the trailer as her voiceover declares, "The Joker and I broke up."

Based on the clip, it seems like this is the beginning of the Birds of Prey story. And her loneliness pushes Harley Quinn to find new companions in Black Canary (Jurnee Smollett-Bell), Huntress (Mary Elizabeth Winstead), Cassandra Cain (Ella Jay Basco), and a detective named Renee Montoya (Rosie Perez). Without Joker, it seems that Harley Quinn has found herself a brand new band of misfits and rebels. And while this might mean that the Joker won't be making any guest appearances in Birds of Prey, it does mean that fans will finally get to see Harley Quinn in all her glory, free from the man who helped make her.

Suicide Squad ended with the Joker saving Harley Quinn from prison, but the rescue was anything but sweet. Throughout the film, Joker was nothing but abusive. To create the eccentric version of Dr. Harleen Frances Quinzel, M.D., he threw her in a vat of radioactive material, and then adopted her as a lover and sidekick, only to let her take the fall when they're finally caught by Batman. Even though he comes back for her later in the movie, it's obvious why these two didn't last. The longer title of the new film is Birds of Prey and the Fantabulous Emancipation of One Harley Quinn, and it looks like she'll already be free of Joker when the movie begins.

While the DC Extended Universe films aren't in direct relation to the comic books, and deviate often, it's worth noting that these two villains do break up in the comics as well. There are many comic iterations of these characters, but in Harley Quinn #25, which came out in 2016, not only is Harley not with the Joker anymore, she's dating someone new.

Robbie, who is producing and starring in Birds of Prey, previously commented on Harley's and Joker's relationship in 2016 when Suicide Squad was released. "It’s kinda like when your friend is in, like doing something stupid in a relationship, and you’re just so frustrated," Robbie told Collider. "You’re like, what are you doing? Why are you doing that? So it kinda feels like that when you watch it, when you’re reading comics and Harley goes back to him."

In her new film, it looks like Robbie is committed to disrupting that cycle, finally giving Harley the freedom she deserves. That said, it might seem like the Joker won't be anywhere near Birds of Prey, but, as fans know, there's no telling when or where this villainous character will show up. He could very well make an appearance, if only to give Harley the cathartic goodbye she deserves.