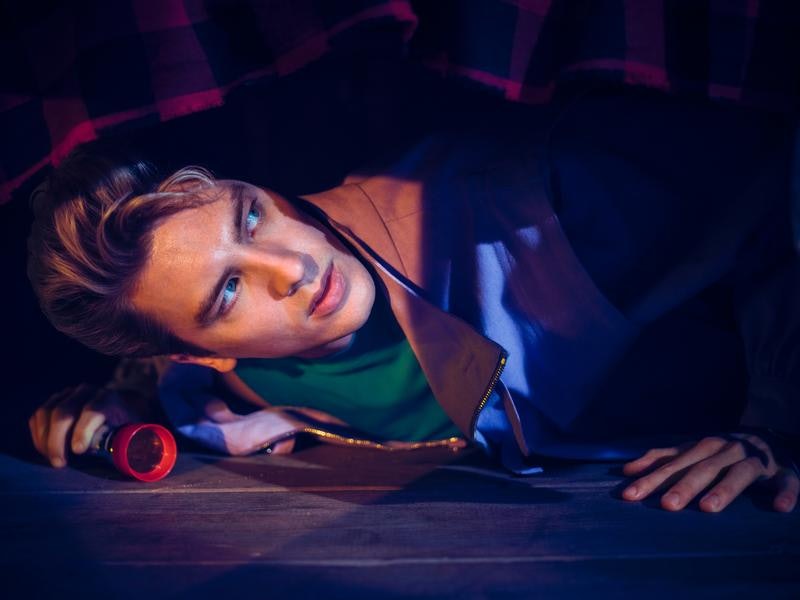 Spoilers ahead for Episode 7 of American Horror Story: 1984. Up until this point, it's been unclear why Montana, Xavier, and the rest of the ghosts have been trapped at Camp Redwood on AHS: 1984, but the Oct. 30 episode finally provided some answers: a blood curse was put on the camp that prevents them from moving on to a more permanent afterlife. And it all traces back to one person.

As it turns out, 1970 wasn't the first time a massacre was committed at Camp Redwood. Back in 1948, when the place was called Camp Golden Star, Mr. Jingles' mother served as the head cook and went on a killing spree after her youngest son, Bobby, died in a tragic accident. She blamed the counselors — and Mr. Jingles — for not keeping a watchful eye on her precious child. She was so vengeful that she even attempted to kill Jingles, but she ended up meeting her own demise instead. It's at this point that the blood curse is said to have started. The way Mr. Jingles tells it, his mother's death is what set the curse in motion, forcing anyone who dies on the camp's hallowed grounds to remain there in a ghostly state forever.

What Jingles didn't explain is how this curse was conjured. Are we meant to believe his mother's grief and anger were so powerful that her spilled blood poisoned the camp to its core? There are still two episodes left that will hopefully provide some clarity, but in the meantime, here's what we do know...

A decade after Mr. Jingles' mother slaughtered the counselors, the place reopened with a brand new name: Camp Redwood. Considering how much blood was spilled during its Golden Star days, it's easy to see why the name was changed — and why "Redwood" was chosen. The woods are quite literally covered with the blood of countless victims.

Mr. Jingles' mother admitted that, after seeing how taken he was with Margaret, she planted the idea of the massacre by whispering in Margaret's ear. She wanted to take away the thing he loved most, just like he had to done to her with Bobby. So while Margaret may have already been capable of murder, she had a bit of a push to actually go through with it.

The Curse Is Permanent

Initially, when the ghosts were thought to be in purgatory, it seemed possible that they could eventually move on to the next phase of the afterlife; they just had to figure out how. However, when Mr. Jingles' mother was trying to convince him to die by suicide, part of her argument was that if he did it, he could wander the camp forever. It's possible she was just saying this to get him to go through with it, but if not then these ghosts are doomed to remain on these cursed grounds until the end of time — and a lot more massacres could end up happening at Redwood.

More like this
'The Last Of Us' Video Game Revealed Tess’ Fate In The HBO Series
By Brad Witter
Wait, Is Barney Stinson Related To Sophie On 'HIMYF'?
By Gretchen Smail
These 5 Words In 'The Last Of Us' Ep 2 Have A *Major* Impact In The Future
By Sophie McEvoy
Linda Ronstadt’s “Long Long Time” Plays A Pivotal Role In The Last Of Us
By Brad Witter
Get Even More From Bustle — Sign Up For The Newsletter
From hair trends to relationship advice, our daily newsletter has everything you need to sound like a person who’s on TikTok, even if you aren’t.