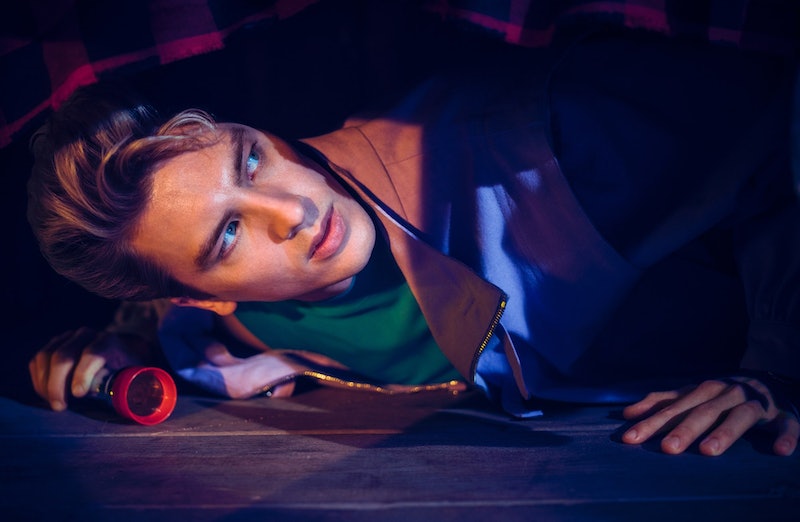 Spoilers ahead for Episode 6 of American Horror Story: 1984. Montana and Xavier may enjoy killing each and every tourist that wanders into Camp Redwood, but most of their fellow unfortunate souls are pretty miserable. Sadly, they don't appear to be able to do anything about it because, for some unknown reason, the ghosts on AHS: 1984 are trapped at Camp Redwood. As soon as they attempt to leave, they're brought right back.

The general consensus seems to be that Camp Redwood serves as a sort of purgatory, meant to punish those who did morally questionable things in their lives. If that is, indeed, the case, then there may be answer to their most desperate question: how to get the hell out.

During Montana and Xavier's latest killing spree at the camp, Ray cautioned them to stop murdering everyone that crosses their path, because their actions could have severe consequences. Montana and Xavier brushed him off. They're already dead and doomed to eternal damnation — what could possibly be worse?

But Ray might be onto something. Is it possible that they're being tested? Become good, and get to heaven — or keep being bad, and go to hell? They don't know the rules that come with being a Redwood ghost (if there are any at all), but it would be better to play it safe and not slaughter everyone in sight, right?

Then again, it's also worth considering how all of these people came to become ghosts in the first place. Most of them were killed by Margaret, while others were the victims of Mr. Jingles, the Night Stalker, or (if you're Montana) Brooke. All four of those killers are still alive, which could explain the presence of so many ghosts. They all have unfinished business to tend to and want to see their killers get the justice they deserve. If Margaret were to die, would all of her victims be able to move on to the next phase of the afterlife, whatever that may mean for them?

The next episode may give them a chance to test the theory. It's airing on Oct. 30, which means a special Halloween-related episode could be in store. Back in the days of Murder House, Halloween allowed the veil to be lifted between the living and the dead, allowing the ghosts to walk freely wherever they would like.

If that rule still tracks for the ghosts of Camp Redwood, then that could help them all carry out their unfinished business a lot more easily. Though, considering it looks like everyone single one of the killers are making their way back to the cursed camp anyways, the ghosts may not need to travel too far to see their vengeance carried out.