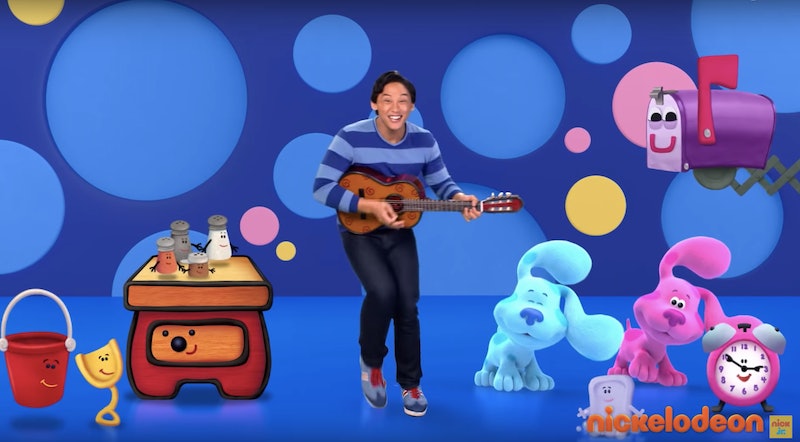 Blue's Clues is back, so pull up your thinking chair and get ready to introduce the young'uns in your life to the best blue puppy ever. Or, just watch at your leisure, there's no judgement when it comes to millennial nostalgia for self care. Fortunately for us all, you can now sneak a peak at Blue's Clues & You! — the Nickelodeon reboot bringing educational cozy mysteries back to your living room.

Whether you watched Blue's Clues as a kid growing up, when you were home sick in middle school, or while babysitting as a teen (and then gossiping about what happened to Steve with your friends) — this Nickelodeon classic is pretty much universally recognized and loved. It's part of our cultural language for sure. Maybe you use "blue skidoo" in casual conversation, only know what color paprika is thanks to Mr. Salt and Mrs. Pepper, or sing that silly planets song in your head any time you have to remember what's between Mars and Saturn.

There was a sequel series called Blue's Room on Nickelodeon from 2004 to 2007, a follow-up/spin-off in the vein of Daniel Tiger's Neighborhood. This reboot, Blue's Room & You, is more like the original series. There's no Steve, or even Joe — the new host is "Josh," played by Broadway and television performer Joshua Dela Cruz. You can tell he's got those pipes, too. Expect all of those classic hits like "We Just Got A Letter," "We Just Figured Out Blue's Clues," and "The So Long Song" to have a little extra belting in the reboot.

The biggest difference between the new series and the original, however, is the animation style. Little kids likely won't be able to tell the difference, but the reboot is entirely CGI. It still has that arts and crafts vibe, but it's just a little bit different. Check out the first look below:

The reboot has everything: stripes, Magenta and the whole gang, the mailbox watching from the middle of the front yard, anthropomorphized soap, a handy dandy notebook that fits a crayon in the spiral, and the promise of lots of future fun.

“I had the great honor of being a part of the search for the new host," said Steve Burns (yes, that Steve) in an official Nickelodeon press release, "and I give Josh two thumbs up! He can definitely fill my shoes, and the rugby shirt.” The press release also reveals that there will be 20 new episodes in the first season of the reboot, and that all of the original creators including Tracy Paige Johnson (who also voices Blue), Todd Kessler, and Angela Santomero are back on board.

Millennials who grew up on Blue's Clues may have become avid fan theorists as adults when it comes to shows like Game of Thrones and Riverdale — but the actual logistics of the Blue's Clues cinematic universe may have to remain a mystery. Did Josh lease this house from Joe and Steve? How is Blue still a puppy, or even still (gulp) alive?

Blue's Clues & You won't hit Nick Jr. until November when school is back in session. It is an educational series for toddlers, after all. At least, when it finally does return, we know it's going to be the perfect thing to show to the kiddos in your life... while not so secretly enjoying for yourself, too.