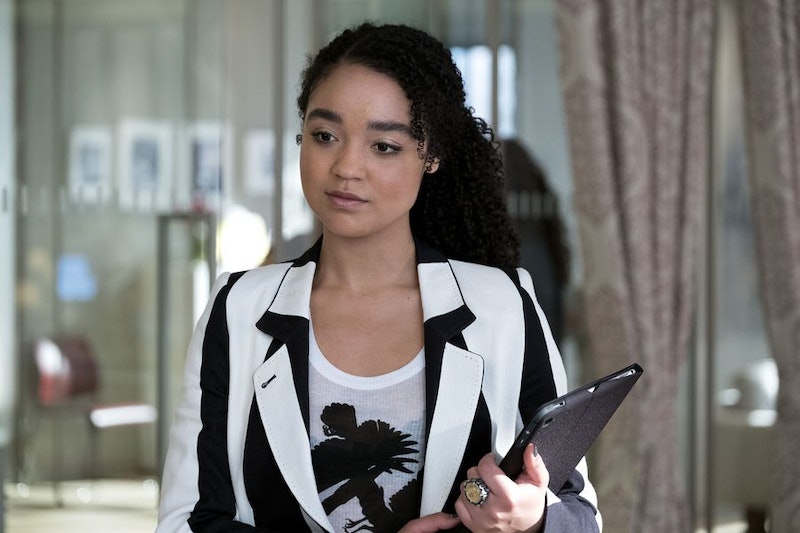 The phrase "intersectional feminism" is used so often that it's kind of lost its meaning, and yet it's a glaring issue when it comes to the feminist lite Freeform series The Bold Type. The show follows two white characters, Jane Sloan and Sutton Brady, and Kat Edison, who is black. It touches on the numerous women's issues that they face as young journalists in a male-dominated world, from #FreeTheNipple to negotiating a fair wage. However, while The Bold Type tackles important women's issues in every episode with an arguable degree of effectiveness, it rarely explores intersectional feminism — even when it doesn't make sense to. Specifically, Kat, despite being a main character, never personally has to deal with these intersectional issues, and it's a huge problem that the show is ignoring her identity.

In simple terms, "intersectional feminism" is the understanding of how things like race, ethnicity, socioeconomic situation, sexual orientation, and more affect how women experience discrimination. For example, the discrimination faced by a white women is different from that of a black woman is different from that of a transgender woman is different from that of a Muslim woman. The Bold Type has touched on intersections before, when Adena El Amin is detained at the airport for having a vibrator in her bag and when Adena runs rather than wait for the police after Kat punches a man who calls Adena by a racial slur. As she rightfully points out to Kat, what's all right for her to do is not all right for Adena, as both a Muslim and a lesbian in today's America.

It's just incredibly disappointing that Adena, a reoccurring character, is the audience's only viewpoint into intersectional feminist issues. Things like this should be coming up for Kat in most, if not every, episode.

Now, I'm not saying that every single one of Kat's storylines should be overshadowed by or somehow related to her race. But her race also can't be outright ignored, and that unfortunately is the approach that the show seems to be taking. For example, in "The Woman Behind the Clothes," Kat faces cyberbullying after she points out the sexism of a virtual reality headset working differently for men than for women. Of all of the horrifying messages that she gets, ranging from simple hate to death threats, not a single one of those messages has to do with her race. As a black woman on the internet, when trolls attack, your weight, your level of physical attractiveness, and your race are the top three subjects they explore — if not all at once. The show's oversight is glaring.

In "If You Can't Do It With Feeling," the episode in which Adena is verbally attacked by a drunk man on the street because of her hijab, Kat punches the man without him throwing any slurs at her too. I repeat: the same man racist enough to throw a slur at Adena for walking didn't throw any slurs at Kat for yelling at him or subsequently punching him in the face. I had a man on the street give me his unwanted opinion that I was too dark to be pretty just last week, and I didn't even hit him.

For racism to only be explored through the character of Adena — who appears infrequently — rather than through the main character of Kat — who has various other storylines to balance that — is disappointing on the part of The Bold Type writers. Doing so makes it feel like racist issues are saved for the Very Special Episodes in which Adena appears rather than being an everyday reality of a woman of color's life.

Even if the show didn't want to explore such overt racism as that displayed by internet trolls and drunken white men, the microaggressions faced by women of color are rife for storylines. TIME defined microaggressions as "unintended slights," be they about one's race or gender, that make a person feel underestimated before of one or the other or both. The Bold Type explores this with Jane, actually. In "If You Can't Do It With Feeling," she was on a panel with other journalists, during which she was interrupted and talked over because she was a young woman, of all things, from Scarlet magazine, of all places. But it's Kat who should be experiencing the most microaggressions — especially considering she's one of the few black women on the Scarlet staff.

Rebecca Caroll wrote an article in 2014 in the New Republic detailing one type of racial microaggression that she had experienced the newsrooms she had worked in before:

"At the start of each new job, where I was almost invariably the only black editor on staff (unless it was a black publication — I have worked at a few), I would be heralded for my 'voice' (and the implicit diversity it brought), until that voice became threatening or intimidating, or just too black."

Many of Kat's storylines deal with her going overboard with what she thinks and feels and needing to be told by her boss to dial it back. And yet what she thinks and feels never has to do with uplifting the black community or with dealing with anything related to her race, even as a passing comment. For example, during "The Breast Issue," Kat is forced to stop posting pictures of women's nipples for Breast Cancer Awareness month by the Scarlet board. When Kat asks Jane what the qualifications are for being a board member, Jane jokes, "balding, off the rack suits, juggling," and Kat later adds, "cowardice, bully... ish... ness" and "middle-aged men" — but never once do either of them bring up that the board members are predominantly white.

At the end of the day, I appreciate The Bold Type for what it's trying to do, even if I find its approach to feminist issues to be too simplistic or neat at times. However, it has already failed in representing women and women's issues if it doesn't consider that women can deal with more than one issue at the same time — especially when real life women of color are forced to.

More like this
Theo James Revealed The Truth About His 'White Lotus' Nude Scene & Fans Can't Cope
By Stephanie Topacio Long
'Waterloo Road' Is Back, With More Than A Few Familiar Faces
By Sam Ramsden and Vivian Iroanya
Twitter Can't Get Over *That* Janine & Gregory Shipping Moment On 'Abbott Elementary'
By Grace Wehniainen
These 'Law & Order: SVU' Throwback Pics Show 23 Years Of Shipping History
By Grace Wehniainen
Get Even More From Bustle — Sign Up For The Newsletter