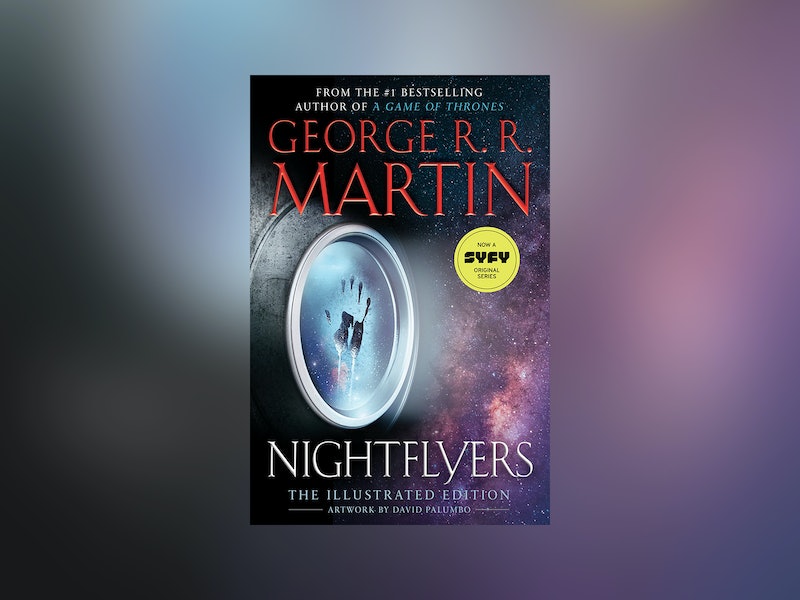 Before George R. R. Martin was famous for his leather hats and his creation of the sexy/bloody fantasy series, A Song of Fire and Ice (and his continuing struggle to finish writing A Song of Fire and Ice), he was penning serialized novellas that melded sci-fi and horror. And now, one novella in particular, Nightflyer, has been adapted into a television show by Syfy. Curious? Of course you are. Predictably, given its creator, the book ending of Nightflyers is full of sudden, dark twists. But that's all that's predictable in this succinct sci-fi/horror novella.

But a warning: there are spoilers ahead. Big, juicy ones.

"Nightflyers" is actually a short novella, housed within a larger collection, also titled Nightflyers and first published in the 1980s. The story begins in the unspecified future, as nine scientists board a "space trader" (think trading ship, but space), in search of the volcryn, a sentient alien species said to have been roaming through space for the last 18,000 years. The ship, also called "Nightflyer," is captained by the highly elusive Royd Eris, who keeps to his quarters and only communicates with his passengers via hologram or intercom.

As the guests become increasingly curious about one another, and about their ghostly captain, paranoia begins to set in. Questions of who is human, who is alien, and the implications of each label begin to ricochet throughout the social circle. What does it mean to belong? What does it mean to intrude? And then, just as the scientists think they've gotten close enough to reveal, to understand, who Royd really is, they begin dying off — suddenly, and violently, and seemingly inexplicably. Fear grips the team of scientists, as they scramble for answers.

Soon, the group is whittled down to four and divided by violently different opinions for how to move forward. Two of them, a pair of linguists, decide to take matters into their own hands, stranding first the remaining two scientists, and then Royd himself, in pods outside the Nightflyer. But the linguists aren't alone, nor are they in charge. Royd reveals the ghost of his cruel, human-hating mother to be the actual captain of the ship.

The battle for the ship is an intensely violent one, primed for the gore-loving crowd; Royd's mother, who cloned him from herself, had powers of telekinesis. They're still there, part of her ghostly power. And as she kills off passengers, she has the ability to then animate them — and have them face off against the few, remaining live ones. Royd's mother is determined to remain alone, remain un-discovered, un-touched, by any means necessary. The only person able to contain her is Royd himself; as a clone, he, too, has telekinesis. But when he finally uses his power to change the gravity levels in the ship, effectively containing his mother's spirit, Royd's heart goes out. He, too, becomes a ghost.

When the Nightflyer, bloodied and bruised, finally encounters the volcryn's ship, it becomes clear that the volcryn are not a "they"; the volcryn are an "it," something collective and seemingly mindless.

Meanwhile, all but one of the scientists, Melantha, is left surviving. And she prepares to spend the rest of her days on the ship, watching over Royd, refusing to leave him alone. Will the TV show end the same way? You'll have to watch to find out.