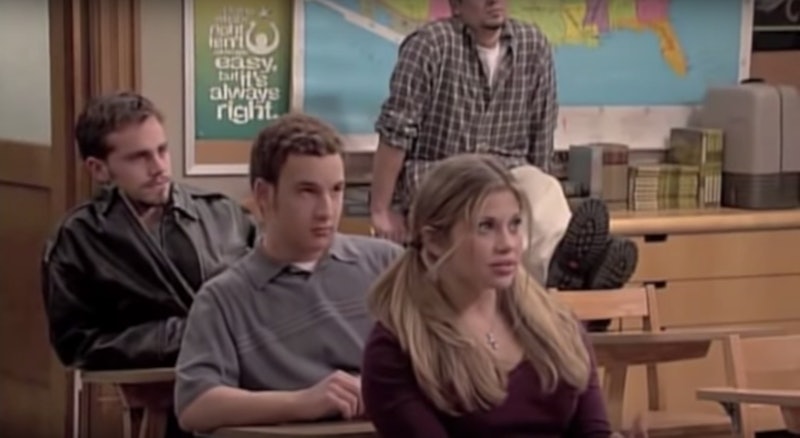 It's been almost 20 years since Mr. Feeny dismissed his class for the last time, but looking at the Boy Meets World cast's latest reunion photos, it's almost like no time has passed. Sure, the follow-up series Girl Meets World was basically a non-stop reunion for actors Ben Savage and Danielle Fishel. But according to E! News, the whole Boy Meets World cast had a reunion this week that was way bigger — even William Daniels, aka Mr. Feeny himself, was there.

The reunion happened at the 2019 Emerald City Comic Con in Seattle, as E! News reported. On Instagram, Fishel shared a photo of some of the main members of the original cast, including her, Savage, Daniels, Will Friedle, and Rider Strong. Of course, the cast looks pretty different these days. They're all grown up, for one thing, and Fishel is expecting her first child, with her husband Jensen Karp. Still, the happy smiles on all the actors' faces — just look at Friedle's grin! — show that the bond between the actors has lasted long after the show ended in 2000.

"Dream. Try. Do Cons. #emeraldcitycomiccon," Fishel captioned the photo. That's a reference to Mr. Feeny's quote from the end of Boy Meets World: "Dream, try, do good." The show wasn't talking about doing well, as in being successful, but about doing good for others in the world. In fact, it's a message that Cory and Topanga passed onto their daughter Riley in Girl Meets World, too, as Uproxx noted in their oral history of Boy Meets World in January 2017.

Savage also shared a photo from the cast reunion at the Comic Con event in Seattle. The actor posted a photo of him with Daniels, writing, "Always my teacher and friend." Mr. Feeny truly is a legend, and it looks like the character lives on in Savage's heart just as much as he does in the hearts of fans.

In addition to Fishel and Savage, Friedle, Strong, and even Daniels all appeared on Girl Meets World at some point. But there's still something special about the new photos of the cast reunion, with the five main characters all in the same place after all these years. Mr. Feeny would probably be retired at this point (he definitely deserves it, after all the years of teaching), and all the characters have grown up to have lives of their own, as Disney Channel teased on the spinoff series, which ended in 2017. But the memory of the show still lives on in fans' hearts, as well as in the hearts of the actors.

Millennials who grew up in the '90s might feel old when they see the Boy Meets World reunion photos. After all, it seems like yesterday that the gang was still in high school, learning from Mr. Feeny and just enjoying their youth. But even though a lot of time has passed since then — Boy Meets World's last episode aired in 2000 — it looks like the stars are still an offscreen family.